Belarusian-Chinese cooperation can be illustrated with various figures and facts, from turnover dynamics, investments and credit support to major joint projects. All are serious and convin-cing, as well as being long-standing, noted Meng Jianzhu, Member of the Political Bureau of the Central Committee of the Communist Party of China, the Secretary of the Central Political and Legal Affairs Commission of the Communist Party of China. He recently met with the Belarusian President, in Minsk. On behalf of Chinese Chairman Xi Jinping, he told Alexander Lukashenko that Mr. Jinping considers him to be his ‘closest friend’. He quoted: ‘Amidst all global leaders, I can reveal my soul only in talking to President Lukashenko.’

To understand the significance of these words, we should note that the Chinese are generally scrupulous in choosing partners. Therefore, such praise is a demonstration of the highest degree of confidence. Three years ago, Minsk and Beijing announced their comprehensive strategic partnership, agreeing on annual meetings between heads of state. The President’s visit to China is being prepared, and should help raise our interaction to new levels. As seen from talks at the Palace of Independence, in Minsk, these are our mutual intentions.

The Belarusian President’s position has been constant. He is absolutely against political tourism. An official visit should bring visible results. Previous contacts at the highest political level have had obvious success. We enjoy solid trade but we need to extend our emphasis. China is among the major investors in the Belarusian economy, with total credit lines amounting to billions of Dollars. The Government could offer more projects for the amount of funding on offer, showing that business interaction is yet to match potential, as founded in political dialogue. This aspect must be improved. Moreover, our country is set to play a key role in the global Chinese project of the Silk Road Economic Belt. Joint construction of the Great Stone Industrial Park near Minsk is among the key elements of this strategic plan.

Meng Jianzhu’s visit to Minsk was more than a courtesy call. On the behalf of China, he heads the Belarusian-Chinese Intergovernmental Committee for Cooperation. Its session in Minsk focused on preparations for the President’s visit to China. According to Mr. Lukashenko, cooperative exchange of technologies and investments is his focus, alongside the development of direct interaction between regions. China accepts and welcomes these initiatives.

According to the Belarusian President, contacts are intensifying across most spheres. In addition, the Belarusian-Chinese Business Forum — held last May — created new impetus for the establishment of inter-regional ties.

Mr. Lukashenko stressed that the Chinese are demonstrating practical interest in close cooperation. During negotiations, the parties agreed on the necessity for even greater intensification of contacts, to promote trade-economic co-operation, helping it reach the same, high, level as political interaction.

According to the President, technological and investment ties should drive Belarus-China interaction. “The recent launch of the Belarusian satellite from the Chinese Xichang Satellite Launch Centre and the creation of modern defense systems have helped advance our partnership to a brand-new, more trustworthy level. In addition to investments, this should propel our bilateral cooperation,” he noted.

The President does not doubt that the second session of the Belarusian-Chinese Intergovernmental Committee for Cooperation will be productive and will help determine steps taking forward Belarus-China relations. Mr. Lukashenko thanked his high-ranking guest for his work in enhancing Belarusian-Chinese friendship and partnership. “I think that everything is going to be all right,” Mr. Lukashenko said confidently.

Meng Jianzhu noted the multi-sided collaboration enjoyed with Belarus, stating that Belarusian-Chinese relations are developing and strengthening, owing to the two states’ leaders. He appreciates the high level of political trust and mutual support at major international events.

“We strongly support each other in the most acute problems of common interest,” he said, praising the Belarusian President’s role in developing Belarusian-Chinese co­operation. He commented that China views Mr. Lukashenko’s forthcoming official visit as a major event in Belarusian-Chinese relations for 2016.

The recent, authoritative delegation is overseeing issues relating to preparations for Mr. Lukashenko’s visit to China. “We hope for the efficient development of our bilateral ties,” Meng Jianzhu said, adding, “Chinese-Belarusian friendly relations and cooperation are the best they’ve ever been. We believe that interaction between the Belarusian and Chinese nations has very broad prospects. We’re confident of an even brighter future for our cooperation.”

According to the official, the political views of our two countries coincide across the most topical issues on the international agenda. “We’ve an unprecedentedly high level of mutual political trust,” stressed Meng Jianzhu, adding that trade and economic cooperation between our two countries grows stronger all the time. He described the China-Belarus Great Stone Industrial Park as an exemplary cooperation project. “In scale and pace of development, it is amazing us all,” he noted.
Заметили ошибку? Пожалуйста, выделите её и нажмите Ctrl+Enter 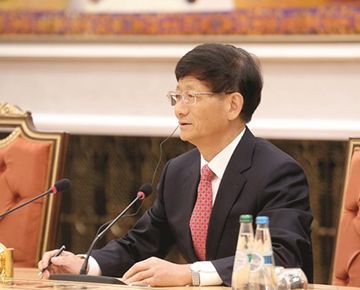