Masterpieces worth their weight in gold

President Alexander Lukashenko initiated the idea of reviving the technology and traditions of making legendary Slutsk belts two years ago via the Slutsk Belts state programme, running until 2015. The notion has proven extremely popular, with Slutsk belt designs appearing on book covers, dresses, stamps and coins. 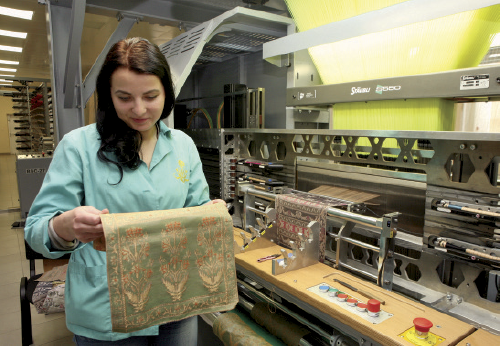 
The main objective of the programme has been the revival of the craftsmanship of Slutsk belts. Three hundred years ago, they were woven from golden and silver thread and were worn by the wealthiest noblemen and merchants, as a sign of prestige. They were even ‘faked’ by French masters. A great deal of time and energy has been dedicated to the revival of traditional methods in recreating the masterpieces of long ago, with expert help from the National Academy of Sciences of Belarus. Vitebsk State Technological University specialists developed a unique computerized loom especially for the purpose, with the commission taken by a well-known German firm. Meanwhile, the final manufacture of the exclusive garment has been entrusted to  Slutskie Poyasa Republican Unitary Enterprise.

The first belt of such a kind (a full copy of an original) was presented to the President during his visit to Slutsk this spring. It is now on show at the Palace of Independence, where its 3.5m of beautiful craftsmanship can be admired. It weighs just half a kilo, despite its intricacy. 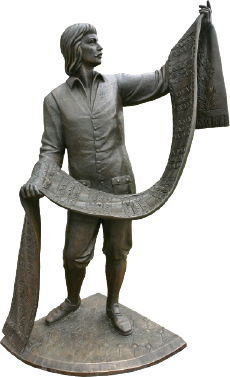 According to the director of Slutskie Poyasa enterprise, Larisa Tarasova, it took six months to make that first belt, but the process is now much quicker. Designs are approved by the Scientific-and-Expert Council, created under the Ministry of Culture. Ms. Tarasova tells us, "We are copying belts that have remained in Belarus and are currently working with originals from the National Art Museum of Belarus and Minsk Regional Local History Museum in Molodechno.”


The most skilled weavers have trained in Germany to use the unique loom, which is controlled by two computers. Each 3.5m belt takes just 62 hours to complete: vastly faster than the time it took Slutsk weavers so many years ago, when all weaving was undertaken by hand. It was the preserve of men, and hard work.


This year graduates from the Baranovichi State College of Light Industry will have a chance to use the machine tool. Larisa won`t reveal how many unique Slutsk belts have been made on the German machine so far, as it`s a commercial secret, but she explains that belts are generally made to order, as gifts for foreigners. Our museums are yet to buy the masterpieces, as they are too expensive. She notes that the gilding costs approximately $6,000, although cheaper variants are possible. “For example, a fragment of just 33cm x 43cm can cost about $250, if using silk and metallized thread. Of course, we can use real silver and gold if requested,” she explains. Ms. Tarasova is proud of this, saying, “We’ve managed to recreate historical technologies; it’s a real miracle. Our history and our pride have returned to us: Slutsk belts which were once seen only rarely in Belarusian museums.”

Among the inexpensive souvenirs bearing Slutsk belt motives are bookmarks, covers for mobile phones and glasses, and various bags, all made at the factory. Workers have three shifts, and all production is sold quickly. 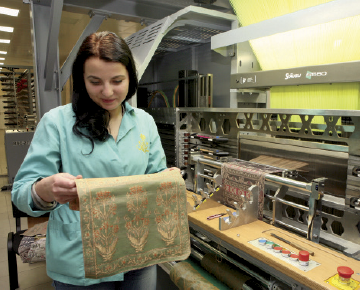