Chanbara, which has grown from the samurai tradition, is popular in many countries and Belarus recently hosted the First Chanbara Championship

Generosity — the feature of the strong people

Japan attracts many with its originality: hieroglyphs and sumo, sushi and Fujiyama, ikebana and geishas. These attract people with a sense of adventure, and a yearning to understand other cultures. The lives of people in the Land of the Rising Sun are fascinating to us. 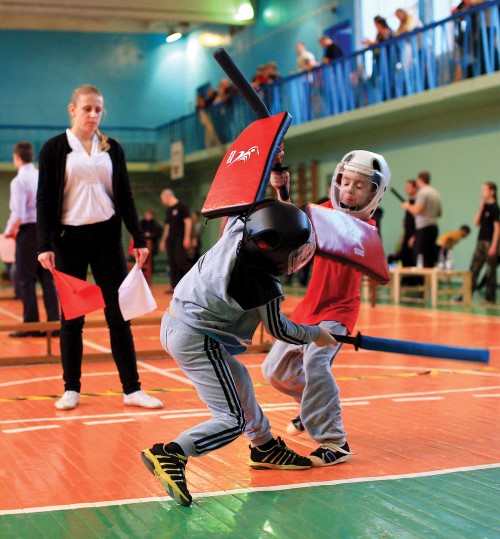 For many, the fearless Japanese samurai (well-known worldwide) encapsulate much of what defines their culture: think of such films as Seven Samurai, by Akira Kurosawa, and The Last Samurai, which starred Tom Cruise. However, you don’t need to travel to Japan to learn about its history and the secret martial arts of the samurai. Chanbara, which has grown from the samurai tradition, is popular in many countries and Belarus recently hosted the First Chanbara Championship (also called Spochan). It gathered more than 100 sportsmen, in Vitebsk, at an event organized by experienced Russian coaches, and attended by the world’s Spochan champions.

Spochan was founded by Samurai Tetsundo Tanabe, a sword master, in 1971, based on his childhood love of playing with wooden swords. He later launched his own security company and wanted to train his employees in fencing. The hollow swords used are pneumatic: pumped with air, as you would a football. At first sight, they seem strange weapons but their advantage is that they allow contact without injury, so that the speed and force of each blow does not need to be limited. Even the strongest blow leaves only a bruise, while a helmet protects your eyes and head, with a transparent visor. 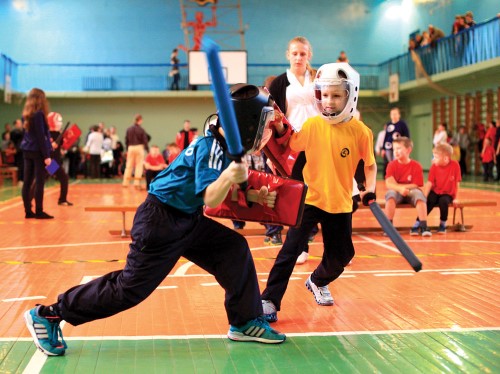 A short, 60cm ‘Kodachi’ sword can be used, or a 1m ‘choken’ sword, as well as a shield, dagger, spear or other weapons. It seems playful but martial arts require a degree of seriousness. Moscow’s Anatoly Ashkhotov, the Vice President of the International Sports Chanbara Association, assures us, “In Russia, chanbara has been developing since 2002. I came into the sport from karate in 2003 as I enjoy free single combat and striking with full force. The Russian team has been attending major tournaments, with two world champions attending the Vitebsk event as judges: Mikhail Khabirov and Maximilian Manshin. Belarusian colleagues were able to learn from their expertise, being relatively new to the sport. The pair also enjoy performing to an audience, giving demonstration fights.”

At the World Championships, which are held in Japan, sportsmen first fight with short swords, before moving on to long, and so on. Winners are chosen in each nomination before meeting in the final, where the absolute champion is determined (the grand-champion). 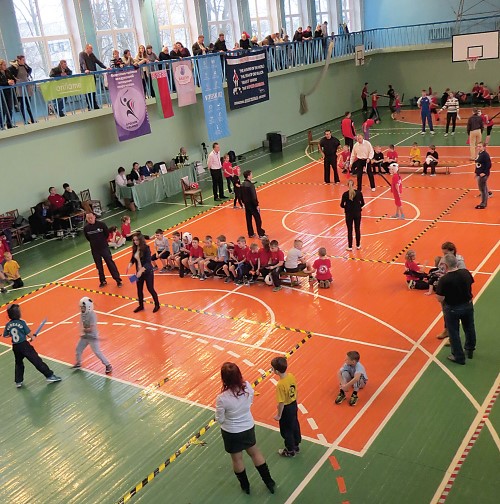 In Vitebsk, I chatted with grand-champion Maximilian Manshin, a 25-year-old coach with a Moscow fitness club, who gave me a master class. He told me, “There is a nipple in the base of the handle — like the nipple of a bicycle wheel. We insert it into the pump to inflate the sword and its camera is protected by a special covering. If you take a long run or wield with strong impact, it can blow out but I haven’t experienced this myself.”

In the semi-final of the World Championship, Maximilian saw the real manifestation of the samurai spirit: bowing to his rival, to the judges and to the audience before combat, to show his respect for the place of meeting and for his opponent. All ‘mean’ techniques were prohibited and the combatants were expected to confess if they received a blow from their opponent unseen by the judges. Manshin tells us that this ‘code of honour’ is at the heart of the sport. He notes, “I witnessed such a deed, while fighting the son of the founder of Spochan: Ken Tanabe. The judges hadn’t noticed my blow connecting but Ken brought it to their attention.”

You can imagine how much inner-control is needed to ensure such honesty, especially since combat continues until the first ‘palpable hit’. Alexander Kim, who coaches the Russian team, believes mental attitude is the most important component. He explains, “It’s an asset if a boy or a girl has good reactions and speed, but they can learn, even if they lack experience in other martial arts. Spochan is attractive in being ‘democratic’ — irrespective of age, fitness or flexibility. It’s vital to train regularly and to have discipline; you can achieve good results within a few months and, within two years, can participate in high level tournaments. We hope to see Belarusians competing at championships in Russia soon. Currently, they are taking the first steps but are doing well. The Championship of Belarus pleasantly surprised us in its size and competent organization.” 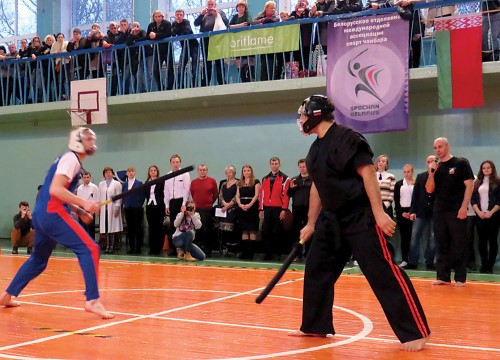 The first steps of Belarusian Spochan

Andrey Kalistov, who heads Vitebsk’s School of Wushu, also coaches in martial arts, having a certificate from Shandong University, in China. The school has existed for 12 years, raising combatants who have taken top prizes at the European Wushu Tournament.

The school has a contract with China’s Henan Province University, to encourage co-operation in the spheres of sport and tourism. Kalistov learnt about Spochan on the Internet and thought it to be interesting. He tells us, “We fence a lot with sabres, sticks and swords, but Wushu relies on flexibility, so it takes 2—3 years to learn, while children wish to compete as soon as possible! Spochan is more simple and democratic, so maintains their interest during training — and doesn’t result in injury, which is very important. Not all children can endure pain from fist blows or kicks. No such problem exists with Spochan that helps to keep fit in a rather simple way.” 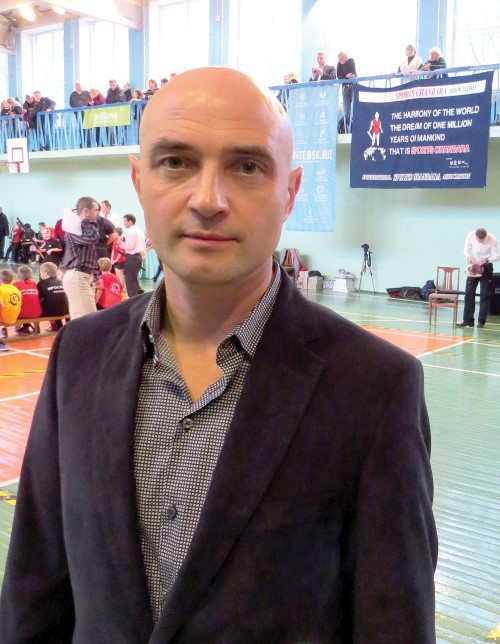 Andrey Kalistov, head and coach of Vitebsk’s School of Wushu


Kalistov is the only Belarusian Spochan coach to have a certificate from the International Association in Moscow. Other Belarusian Spochan coaches are being trained in Vitebsk and official Belarusian Federation in the sport is planned. The Russians are keen to welcome new members to the International Association and are also eager to find new hosts for the First CIS Open Sport Chanbara Championship. Kazakhstan, Ukraine, Latvia, Estonia and Poland all have enthusiastic combatants, with Belarusians soon joining them. Anatoly Ashkhotov is hopeful that Vitebsk may yet hold the CIS tournament.

The International Sports Chanbara Association (ISCA), whose headquarters are situated in Yokohama (Japan), includes federations and unions of more than 40 countries worldwide. There are about 4,000 officially acknowledged instructors. The last 40th World Championship was held on November 2nd, 2014, in Tokyo. The last, 8th European Championship was held in April, in Germany’s Frankfurt am Main, while Russia is scheduled to host a tournament in March 2015 and the Russian Cup is due this autumn. 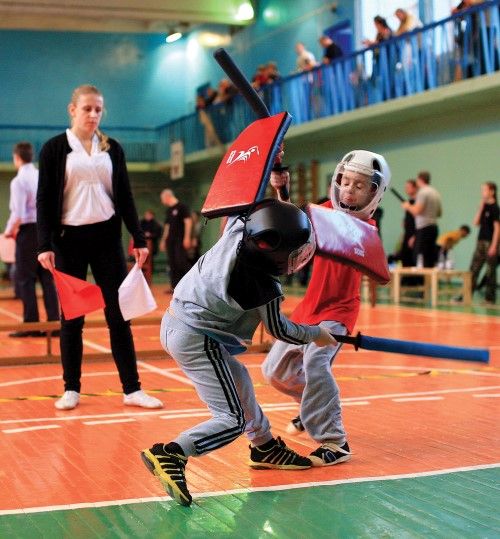