Denis Kitel, from Malorita settlement, is happy in his work, studying the wild world. He graduated from the Biological Faculty of Brest State Pushkin University, before going to the University of Algarve (Portugal) and taking employment at the APB-BirdLife non-governmental organisation. Now, he is a ‘free ornithologist’ and an active conservationist, enjoying his childhood hobby at the highest level. 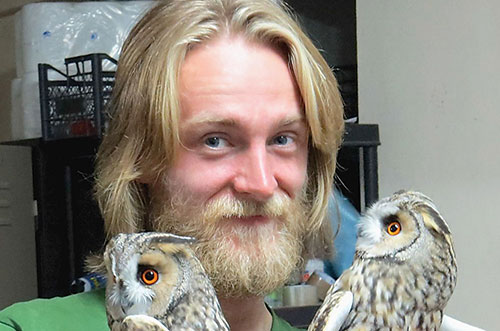 Вetween travels, which are always connected with bird watching, Denis lives in Minsk. He occupies himself with studying owls in nest boxes, and writes articles on environmental themes. This year, he recorded a new bird species for Belarus: a yellow-browed warbler. This brought him a prize from the Championship for Sporting Ornithology.

Over the past 27 years, he has visited over 20 countries, travelling to Georgia last summer, to attend a festival of birdwatchers; he shared his experience of Belarus’ ecological tourism, and his adventures in Turkey, where the Belarusian ornithologist was the main bird ringer at a station in the North-Eastern part of the country (on the floodplain of the River Aras).

Denis believes that his experiences at the station are priceless. Only foreigners work there, since Turkey lacks professional ornithologist-ringers with a license for such activity. Every year, the ‘Kuzey Doga’ organisation invites experts from other countries to undertake work. Denis took over from an ornithologist from Bolivia, who is now living in Spain. Denis was the only professional ornithologist, joined by six amateur enthusiasts.

‘Kuzey Doga’ ringing station is situated in the valley between the mountains, about 5km from the border with Armenia. The ornithologists lived in a village half a kilometre from the station, in a house donated by local authorities. The keen bird-watchers would go to the station each day about half an hour before dawn and would return at dusk, Denis determining the species of birds and ringing them. On average, they would catch about 100 birds daily, amounting to around 3,000 over the whole month!

At night, when he was ready to sleep like a baby, Denis went to catch owls: the nocturnal birds of prey are his ‘old love’, so he couldn’t lose the opportunity to see local representatives. He tells us, “I’ve worked at a lot of ringing stations, in various countries, but Turkey is a special place. There are not only a great many species of birds, unseen in Belarus, but it’s been a very useful experience for me.”

Work at ‘Kuzey Doga’ ringing station is performed on a volunteer basis, without payment, although it defrays all travel expenses and provides accommodation and meals. Denis enjoyed his time there very much and plans to return if he can. He has already been invited to Turkey for the winter but has other plans for January, although he won’t tell us where until he returns.

This year the cuckoo was the centre of attention, but the long-eared owl is already flying towards next year’s leading role. The nature organisation APB Birdlife Belarus declared the bird the main focus of the next campaign. 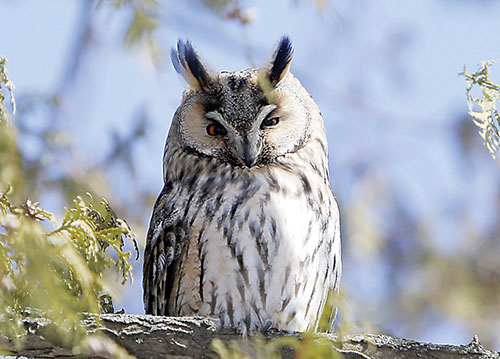 
According to Karina Solovey, the development officer of the APB, the national campaign Bird of the Year has been held in Belarus since 2000, “The main objective is to draw the attention of the population to the beauty of nature and birds living round us and the necessity of preserving them. Activities are carried out throughout the year with the opportunity for people of different age groups to take part.”

Members of the APB’s rare bird club will organise an owl excursion. Among the nature protection activities is the search for long eared owl nesting sites and the hanging of artificial nests. An information pack about the bird is being prepared. The smallest participants in the campaign will take part in drawing and photo competitions, craft activities using natural materials amongst other events.

“Our experience shows that long-eared owls respond well to our interventions and will occupy artificial nests.” They plan to build as many nests as possible and teach all those interested to make them,” said Semen Levy, the APB’s expert on nature protection.

The campaign is actively promoted by the Ministry of Natural Resources and Environmental Protection, and the Ministry of Education. In addition, the National Bank and the Belarusian Postal Service is planning to issue traditional coins and stamps with the image of bird of the year on them.

10 interesting facts about the long-eared owl:

The distinguishing ‘ears’ made from the feathers of this owl have nothing to do with ears. Its real ears are difficult to see, as they are hidden underneath the feathers.

The long-eared owl is one of 11 species of owls nesting in Belarus.

According to bird-ringing data, the oldest long-eared owl lived for 29 years and 9 months.

This owl can turn its head 270 degrees!

In common with other species of owls, long-eared owls do not build nests. Rooks, hooded crows and magpies are threats. The nest should be well hidden in the densest part of the tree.

The birds spend the winter in Belarus. At winter sites they gather in large groups. It is usual to see a train of 8-12 owls and often up to 30 and more will spend the daytime hours together, frequently on one tree.

Its sharp ‘ears’ made from feathers of different lengths and the bright orange colouring of the iris, make the long-eared owl resemble a smaller version of an eagle owl.

Long-eared owls do not have many enemies. The eagle owl is the greatest danger for the bird, as well as the pine marten, which likes to take any chicks from the nest.

Long-eared owls exclusively eat rodents, especially grey voles. In order to snatch one victim, the owl needs to make 2-3 passes, and in strong winds or rain the efficiency of their hunting decreases enormously.