Diary of a soldier 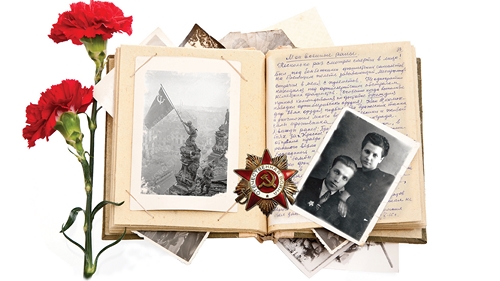 His diary begins: ‘The war ended long ago but, at night, my mother secretly mourns me, her son without legs.’ The Great Patriotic War veteran Alexander Andreichikov, from Gomel Region, went to the front near Leningrad, aged 17. He survived the blockade unwounded but for a small injury: a fragment of shell in his liver, which brought infection and resulted in him having his leg amputated.

He was one of millions of soldiers fighting not for glory but from a sense of duty and patriotism. He had no heroic aspirations. Some years later, he began to recall events at the Front, and recorded them in diary form not for publication but to preserve those memories.

In the 70th anniversary year of the Victory, his widow, Olga Andreichikova, from Baranovichi, brought the book to us and we here offer extracts for your enlightenment. The words are personal and intimate, being unintended for public consumption. In fact, this makes them, significantly, objective.

Fragments from the diary of Alexander Andreichikov

I was born in 1923, in Chechersk District (now Buda-Koshelevo District) in the Belorussian Soviet Socialist Republic, in the settlement of Bashitsa.

Before the war, I worked in Ukraine, at a mine in Sumy Region. Then, on holiday, I visited my uncle in the Karelo-Finnish Soviet Socialist Republic. I became caught up in the Great Patriotic War and couldn’t return to my homeland, since Belarus was occupied by Germans. Being just 17, I was prevented from going to the Front; it was necessary to be 20. Others tried to escape from the war by inventing various tricks but I didn’t understand them. I returned on July 22nd, 1941, to the District Military Commissariat, to go to the Front, and was enlisted as a volunteer-Komsomol member in the Red Army.

I was directed to the artillery regiment of an army camp near Leningrad. There, I graduated from a regimental school and was given the rank of sergeant. At first, I was a gunner for a 76-milimeter cannon; then, the cannon commander. I helped fight for control of the River Neva, as well as for the towns of Pushkin, Gatchina, Petergof, Krasnoe Selo, and Oranienbaum.

Many civilians escaped the Germans, driving herds of farm cattle away from the Nazis. Roads and roadsides were covered in slaughtered cows and sheep, and horses with split bellies. Among them were human corpses. You couldn’t walk or drive through.

Several times, I looked death in the face. I was bombed by Nazi planes, including a Messerschmitt, with its muffled roar; it fired its machine-gun on me. I was repeatedly under artillery fire.

How did we fight in 1941? Horses pulled weapons and gunners roosted anywhere. In winter, soldiers continued without valenki, jerseys, cotton pants or warm linen. We only washed occasionally.

We fought and starved in the harsh conditions of Leningrad’s Front. We didn’t eat for days. They threw breadcrumbs from a plane, which we shared, taking one a day. There was a lot of boiling water though. The norm was for 200 grams of bread daily, but it was mixed half with sawdust and other rubbish. We ate dead horses, and gathered rotten potatoes from the fields, while under fire. In summer, we ate sorrel, nettles, berries and mushrooms.

When our battery was broken by the Nazis, we escaped as best we could. I might have been captured and died, perhaps burnt in a crematorium, but I survived. I crawled on my belly for 2–3 kilometres, to find our soldiers. I continued fighting, again with the artillery.

While fighting near the walls of besieged Leningrad, I was twice wounded. On September 11th, 1942, in the battle for Oranienbaum, fighting for Kolokolnya Hill, near Gostilitsy, I lost my right leg, following my liver being punctured by a shell fragment. I regained consciousness some hours later, when the infection had already taken hold and gangrene had set in.

My leg was amputated and a military ship took me through the night, across the Gulf of Finland, to besieged Leningrad. The Nazi bombs were exploding around the ship, sending spumes half a kilometre in the air. I was placed with an evacuation hospital in hungry, cold Leningrad. Then, they drove me, still wounded, on a military ship across Lake Ladoga, before placing me on a train to a hospital in the Urals, in the town of Molotov (Perm). I was there until February 1943.

My severe wounds brought heart complications. Of course, to destroy a Nazi tank you need to be within 200-300m. It’s like a duel! I would fire my armour-piercing shells and then submit to return fire. I destroyed two tanks with direct fire, and various enemy equipment. From those ‘tigers’, with their black crosses and caterpillar tracks, the towers and cannon trunks flew into the air!

In 1943, they sent me to transport spies. Time and again, I delivered German prisoners for interrogation at our headquarters.

My father, Filip Yefimovich, fought for Petrograd in 1918, against Denikin. In 1941, he took part in the Great Patriotic War, helping liberate Gomel, Zhlobin, and Rogachev, and taking Koenigsberg. He reached Berlin, and then beat the Japanese in the Far East. Only in September 1945 was he demobilised.

In 1944, I told my mother, by letter, that I was alive. I wrote: ‘I’m alive. I’ve defended my native Leningrad. My head and hands are intact. They will sew up my leg or give me a new one, made of iron.’

Then I returned home — to my home village of Bashitsa — without my right leg and with a wound in the abdomen. Nobody was astonished. The villagers even envied me.

I began to work as an accountant for the kolkhoz; the old Demyan was the chairman: a drunkard. He was the only man in the whole village, besides me, an invalid.

There was only one horse in the village, left by Soviet soldiers during an attack on the West. The German Nazis drove away all other animals and birds. From the garrets of houses, the chairman of our kolkhoz and I took ploughs, harrows and collars. To tell the truth, it caused fights and scandal, but we took the things.

We began spring sowing early, ploughing the soil. Women were harnessed to the plough and the harrow, and the chairman of the kolkhoz operated the plough. When mowing time arrived, old men riveted braids, and women mowed.

Victory Day, on May 9th, 1945, saw everyone crying with joy. Those who were not crying were gloomy and depressed. How much grief there was in every house: sons and husbands dead.

October 1965: My whole blooming youth was destroyed by the war. I am very thin and pale as a wall. I’m jealous of just one person: a dead soldier, since he does not suffer anymore.

His suffering was not in vain, since he ensured freedom for those who came after him. Unfortunately, his severe war wounds prevented Alexander from living a long life. He died in 1974 and, in 1975 (symbolically, on May, 9th) his first grandson was born, and named in his honour. Alexander Gil, and his brother Vadim, never met their grandfather.

This year, on May 9th, they joined their mother, Helena, and their aunt Alla, daughters of soldier Andreichikov, in going to St. Petersburg (the former Leningrad). There, they visited the places where their grandfather fought. They climbed Kolokolnaya Hill, reading his diary, so that they might try to imagine events there, more than 70 years ago.

People say that the war is remote and events fade from memory. However, families do preserve those memories, for passing onto successive generations.