A festival of street culture was held in Grodno

A festival of street culture was held in Grodno.

A festival of street culture was held in Grodno. The unusual, or as it is now fashionable to say, alternative, holiday gathered thousands of visitors on the ancient roadway. Many of those who appeared that evening in the city centre, broiled with impatience in expectation of surprises. After all, the art of street performance which is an ordinary phenomenon in places of traditional tourist pilgrimage is still, for all of us, a wonder. The essence of this genre is simple: without begging, unostentatiously, only in reward for a show to encourage townspeople and tourists to fork out money. 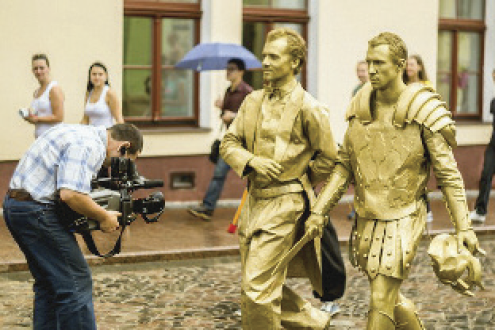 This time, more than one hundred and fifty artistes working not in academic genres gathered for the international festival Grand Teatro-2014: revived statues, geishas, angels and magicians, fiery dancers, actors of theatre of shadows and interactive improvisators, while the regional centre itself became a big theatrical scene full of exotic and fantastic characters.

An increadibly high concentration of mythical and surrealistic people freely walking on roadways, as if they do it every day, added a carnival mood to the festival. Carefully prepared and directed performances let spectators know that they were dealing with professional actors, only more cheerful and accessible than at the usual theatre.

Performance at arm`s length inevitably attracts any spectator, and makes part of the scenario. This occurred during a performance of Don Quixote performed by the Eye Amateur Theatre. The public not only helped a silly, but noble, character to achieve the attention of the beautiful Dulcinea sitting on a window of the second floor of a typical Grodno house, but also took an active part in the struggle against windmills. As a result, the spectators, covered with flour from head to foot, gave a standing ovation (there were no chairs in the street) to the surprised actors who managed to plunge people into an atmosphere of carelessness and impunity. The head of the theatre, Dmitry Mastyanitsa, achieved such reaction on the staging, “For street art it is important to be a provocateur. Look around at how serious and deepened in the problems the people are. And our task is to not only to show a cheerful face, but to make people’s faces became cheerful too. How do we make it? We create a special atmosphere. We behave like children, we give spectators a chance to recollect those times when they were small too and could do everything they wanted and nobody could condemn them for that.”

Traditional favourites of Grodno public are the live statues. There are always a lot of people with a mistrustful look around such actors — after all it is like a miracle: a living person, but looking like a metal idol. All people approach and as if in wait — what will be next? How to behave with such a statue? 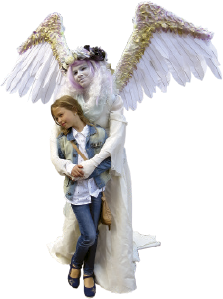 Children, as always ease the atmosphere, without ceremony, they are posing before cameras near the false sculptures. All receive pleasure from the process and even the statues are not an exception.

“How wonderful it is here! I was at last year`s festival in Grodno, and it seems to me that this year, it has become even more interesting. More smiles, more interest and more fairy tales!,” shares the impression of the gold statue of street illusionist Alexey Stukin, who is light-heartedly playing with a cane which hangs in the air without any visible support.

The narrowest circle of spectators gathered around a card conjurer. It is impossible to approach there, but it is possible to hear such emotions that can be used to dub a sitcom. Now all the people start laughing loudly, now they are roughly surprised. Disappointed sighs sound — these are those who, behind the back of the conjurer, casually saw that he took a card not from behind an ear, but hid it in his palm.

One of the organizers of the festival, the co-ordinator of the project Live Story in Grodno Region, Sergey Ivanov, tells that this time, they managed to find actors of the eccentric genre not only from Minsk. It appears, that there are a lot of them in province, “This year, we have considerably expanded the geography of our festival. Actors from Zhlobin, Brest, Vitebsk, Skidel and Lida came here. As usual, we use the forum to acquaint Grodno residents with the creativity of one of our fellow countrymen. This time, the choice has fallen on artist Stanislav Zhukovsky, the native of Volkovyssk District who lived on the boundary of the 19th and 20th century. We have prepared an exhibition of reproductions of his landscapes, and any interested person can learn all the particularities of the artist. Here, by the way, he walks — the man in a light frock-coat.”

And really, an imposing gentleman accompanied by a fragile lady in a floor-length dress told people with readiness about how he painted Niemen and the gentry estates. And, like his teacher Levitan, he made it without sketches, directly from nature.

That wonderful day came to an end with a show of fiery and neon dancers and a performance of shadow theatre — flashes of light against a background of evening darkness of the outgoing summer. A beautiful finale.