For the first time, a teacher becomes an honorary citizen of Brest

Treated according to the merits 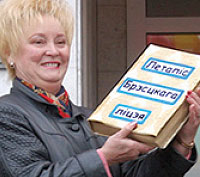 The honorary rank was given to the honoured teacher of the republic, the headmistress of lyceum #1 named after A.S. Pushkin, Svetlana Semenova for her long-term, honest work in the educational system, her high professionalism, big personal contribution to education and upbringing of rising generation and her active participation in public life of the city. Directly on stage, to the applause of participants of conference, the Chairman of the City Council, Nikolay Krasovsky, pinned the blue ribbon, with an inscription ‘Honorary Citizen of Brest’, on the Director of the lyceum.

In the history of the city, just 26 people have received such rank. “Among them there are war heroes, defenders of the Brest Fortress, Olympic champions and outstanding builders. But teachers have never been among them,” the Head of Administration of Brest’s Moskovsky District, Alexander Rogachuk said. “Semenova is a brand of pedagogics of our city.”

Having thanked for everyone for their high estimation of her work, Svetlana Semenova noted that the reception of high rank is a tribute to representatives of her trade. “I am glad not to that in the list of honorary citizens there is the surname of Semenova, but that opposite to this surname there is profession of a teacher. I am glad for all of us. This rank should be divided today between hundreds of simple teachers entering the classroom every day and bearing the responsibility for each child entrusted to us. It should be given to the big corps of my colleagues — directors who bear personal responsibility for the realisation of the state educational policy,” the honorary teacher said.
Заметили ошибку? Пожалуйста, выделите её и нажмите Ctrl+Enter