This event, which has been long anticipated, occurred in Minsk.

To stop. To look around. To think 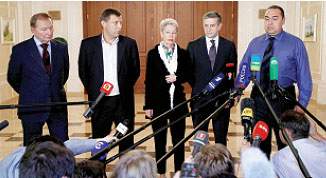 This event, which has been long anticipated, occurred in Minsk. At negotiations between representatives of Ukraine, the self-proclaimed Donetsk People’s Republic (DPR) and Lugansk People’s Republic (LPR) with participation of OSCE, ceasefire agreement for Donbass was signed.

I quote the message of the news agencies which, like lightning, has flown all over the world: ‘The protocol on a ceasefire from 6pm Friday has been signed. The protocol consists of 12 points which include all aspects of control, exchange of captives and other issues’.

Certainly, all these points demand additional explanation and for certain will be supplemented, explained and will become the beginning of long and hard work, but during the moment when these lines are being written, I want to share one main exciting feeling — the sensation that history is being made before our eyes, and that the main junction of the next historical turn occurred here — in Minsk!

It is not a happy ending, but only the beginning and everything is not so simple that in the reasons and consequences of the Ukrainian crisis, it could be resolved by the forces of one side or another.

During the same minutes, when the participants of the meeting walked up the stairs of the President Hotel for the signing of the peace protocol, news agencies broadcast reports about some of the fiercest battles for Mariupol. According to one source, rebels have already surrounded and taken this city, according to another, the Ukrainian army continues their persistent defence.

But what exactly happened in Minsk that was so important? It happened that the sides have realised in time that they went overboard and have expressed the political will to stop, look around and think it over. It was the desire of the participants themselves, with the possibility to be gathered in one negotiation platform given to them by Minsk.

During the third round of negotiations, there was increased confidence of all participants in comparison with previous meetings on July 31st and on September 1st, as if they had tested the new mechanism and were convinced that it worked. While yesterday, when the next session of tripartite contact group was starting in the President Hotel on Ukraine issues, the effectiveness of this mechanism was not doubted any more by anybody.

The optimistic tone was set by Leonid Kuchma who, before the beginning of the meeting, expressed its overall objective, “We have arrived for peace.” He, as well as the Russian representative, had declared in advance that the signing of documents following the results of this meeting would occur. Therefore, yesterday’s sensation was somewhat predicted. There was no sense to expect anything else after Vladimir Putin offered a peace plan consisting of seven points, while Petro Poroshenko recently announced the order to ceasefire.

And a more representative delegation which arrived to Minsk from Donetsk, testified to the seriousness of intentions. The Prime Minister of DPR, Alexander Zakharchenko, the First Deputy Prime Minister of DPR, Andrey Purgin, Head of LPR, Igor Plotnitsky and the Chairman of the Supreme Council of LPR, Alexey Karyakin arrived to represent the interests of the self-proclaimed Donetsk and Lugansk People’s Republics at the meeting of the contact group. As we see, the representation in comparison with last session was twice bigger.

The fact that there was a major turn to peace was also confirmed by the whole world background.

Even Wales waited for news from Minsk, where Poroshenko has promised to give the order to ceasefire, and also in Brussels, which did not publish the content of a new package of sanctions against Russia. The introduction of them can be postponed for some days or even cancelled. The Secretary of State for Foreign and Commonwealth Affairs, Philip Hammond spoke with Sky News TV Channel, noting that everything depends on the results of negotiations about peace which were carried out in Minsk.

And they have already received these results.