It’s difficult to remember, and for some, impossible to believe that once, fresh milk in glass bottles was delivered to your door by a milkman, that things were kept in trunks and that children’s toys were mostly made from wood. Even the appearance of those places where one’s childhood was spent is being also irretrievably changed. Former landscapes remain only on old yellow photos or in memories of older residents. 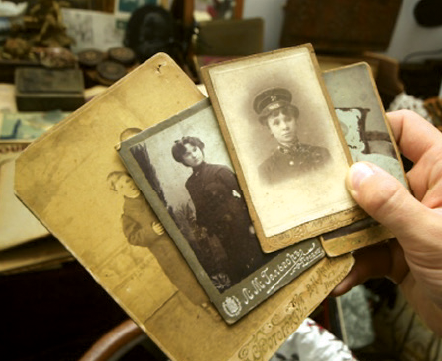 Collection of rarities will talk about past events

Exhibits for a future museum, belonging to the grandfather and father of Janusz Parulis, are being collected. Both have lived their entire lives in Grodno, have rescued it from fires. They have given their love of the city to their grandson, and two years ago, Janusz got an idea to exhibit the numerous pieces.

Recently, in the old house, a half of which is rented by the collector, beautiful plaques with ‘Museum of Everyday Life’ and ‘Farmstead of Janusz’ inscriptions have appeared. Any passer-by can go to the yard and touch the old knife and sword sharpening machines, iron-bound coffers, cots, wooden suitcases, centenary barrels or pre-war armchairs. In general, you can touch everything that has been used by Grodno residents over the past centuries. 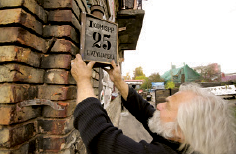 “Grodno is called a city of royal Sejms. So I have a safe where kings have kept important documents” Janusz shows a massive box with a tiny hole. “With great difficulty I could ‘winkle out’ the box from the wall of the castle. There are two hatchets from the times of the Battle of Grunewald. Today, it’s rather difficult to imagine how kings have lived, but with something in your hands that is more than 100 years old, it is easier to restore the picture of the everyday life of our grandparents. Some years ago, I participated in the creation of a Museum of Fire Sciences. But I didn’t give away all my grandfather’s things. The memories are too valuable. I have my grandfather’s dress boots, old fireman’s axes, fire helmets and a sleeve for extinguishing fire from the century before last. Back then, firemen were volunteers, so all the things they needed were kept at home.”

There is a collection of old cameras, starting with the Tsar’s period and ending with a whole line of Soviet cameras. Here is an old mirror, a Warsaw samovar, old crockery. There is a horn of a gramophone — the mechanism has also been kept but time is needed to restore it. In the year before last, Janusz Parulis was invited to rescue the altar at Golshany Castle. His friend and he did everything possible not to harm the unique thing. During the first night, spent in a monastic cell, the White Lady came to him in a dream and said: ‘Make it so that people know I lie here’. Janusz has prepared a little copper plaque, but nobody wants to do an engraving — they are afraid. But if the Lady asks, the gentleman can’t refuse.

“For many years I have gathered hundreds of letters, unique post cards, photos and books about Grodno and its residents. A lot of the old residents recognise their ancestors in the old photos,” Janusz says. “There is a collection of pictures with images of Grodno up to the 1950s. Many streets, buildings and landscapes don’t exist now. There is, for example, a part of a fireplace which was produced formerly by the Grodno Fireplace Factory. More than a hundred years ago amazingly beautiful and natural things were made there.”

To a casual visitor, it may seem that there are not enough shelves, racks or glass partitions in the Museum of Everyday Life, and that, as a whole, everything should be more regulated here; divided according to thematic and time lines. But honestly speaking, this museum reminds one of a house where a lot of generations have lived, and every one of them has left behind everything that they earned during their whole life. Perhaps, because of this fact, it is beautiful, different and attractive place.
Заметили ошибку? Пожалуйста, выделите её и нажмите Ctrl+Enter