Minsk has hosted the Belarusian International Media Forum for tenth time under the purposeful slogan ‘Partnership for the Sake of Peace’. The Standing Committee of the Union State, headed by the State Secretary Grigory Rapota, took an active part in the devel-opment of its programme. Hundreds of famous journalists, scientists and teachers, alongside experts and diplomats from 20 coun-tries, have arrived in the Belarusian capital for three days, with Belarusian and Russian delegations being the most representative. The participants of the forum were addressed by the General Director of TASS News Agency, Sergei Mikhailov, Russian anchorman Leonid Mlechin, Editor-in-Chief of the Sovetskaya Belorussiya newspaper, Pavel Yakubovich, and other prominent media persons. Moreover, the President of Belarus and Chairman of the Supreme State Council of the Union State, Alexander Lukashenko, also sent his greeting, wishing fruitful work to the participants of the forum. 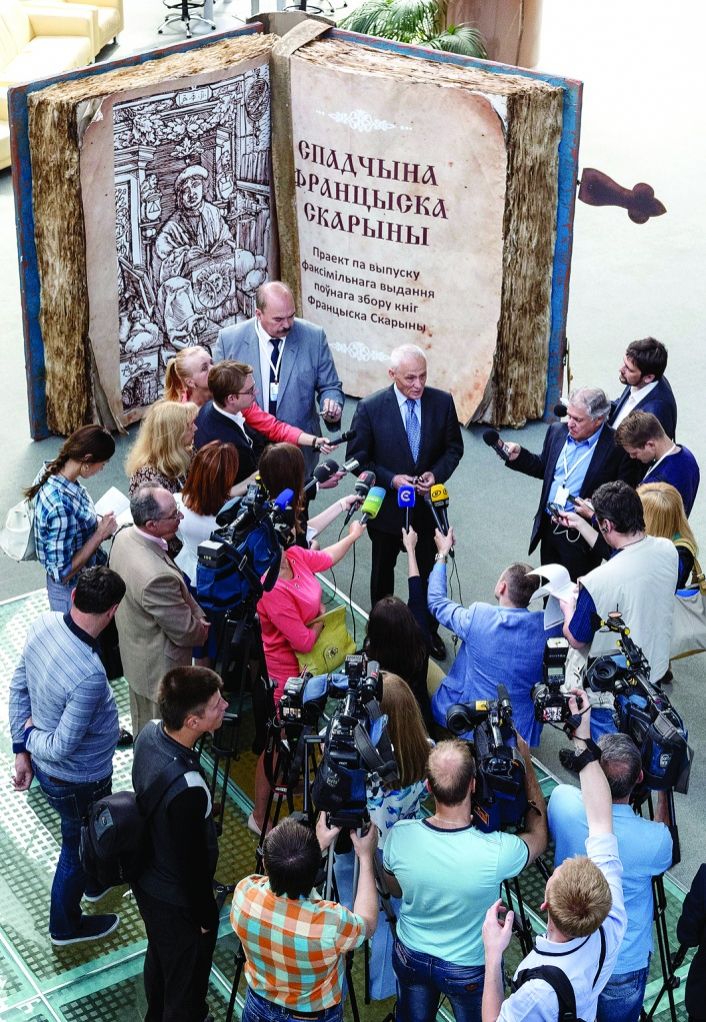 The heritage of the Great Victory of the peoples of the former USSR in the Great Patriotic War became the major topic of the forum. The 70th anniversary of Victory over German fascism is an especially important date for Belarus and Russia, as noted by the State Secretary of the Union State, Grigory Rapota, during the opening of the forum, “The Great Patriotic War has become a bright and simultaneously sorrowful page of our common history. Belarus has become a place of the greatest tragedy and triumph. The Red Army suffered the greatest losses here, yet the highest professionalism of our troops was also shown on this territory… Much is being done to preserve memory about war, including the Fund of Memory of Commanders and the Immortal Regiment event. Recently, a press tour of the Union State media representatives took place, with visits organised to the places of the most blistering battles near Rzhev. The Union State mass media always pay much attention to military topic. In 2014, a memorial sign to honour the Bagration Operation was unveiled with the support from the Union State Standing Committee.”

A separate panel discussion was dedicated to the topic of the Great Victory at the Minsk forum, with Mr. Rapota taking part as an expert. The common opinion is that joint participation in the struggle against Hitler fascism continues to play a big uniting role for the nations of Belarus and Russia. However, the experience of Victory is interesting for journalists from various countries of the world while also being important from the point of view of apprehending the role of personality in the history and understanding many public-political processes, happening on the post-Soviet space and in Europe. Before opening of the plenary session the Chair of the forum’s organising committee and Belarus’ Information Minister, Lilia Ananich, noted, “We see that the world is in the cruel-lest conflicts which lead to bloody wars. Belarus has become an acknowledged negotiation venue where the destinies of the world are solved. The Belarusian mass media treat with due care towards preservation of this constructive dialogue. We see that the topic of the Great Victory has come to the forefront this year. However, aggressive attempts have also appeared to take away our victory. Mass media should insist that history can’t be re-written and its lessons shouldn’t be forgotten. Otherwise, history shoots point-blank.”

The Union State Standing Committee does much to ensure closer interaction between Belarusian and Russian journalists who write on military-patriotic, historical and integration topics. It was mentioned at the forum that an informal pool of such journalists had been formed who know, understand and help each other. Moreover, the forum provided new opportunities for such interac-tion, since the Union State Standing Committee invited outstanding historians, exploring the topic of the great Patriotic War, as well as descendants of great Soviet commanders. Communication with them has definitely brought much useful to journalists.

This example eloquently testifies to the fact that even under the conditions when the whole world is ‘grabbed’ by the Internet and other information technologies, direct communication with each other considerably facilitates understanding. Journalists from various countries actively responded to the invitation to take part in the forum, showing that there’s evident need in such personal communication.

Nevertheless, wide spread of information technologies requires constant update from journalists, since up to 90 percent of cur-rent youngsters take information from the global information network, notes Deputy Head of Presidential Administration of Bela-rus, Igor Buzovsky, “This makes public organisations and people, who are involved in youth policy, think how to influence on the prospects of development of our states, because the younger generation will realise ideas and plans, which are laid open by us in mass media.”

The Internet has actually wiped away inter-state boundaries on the information space, and various opinions have been voiced at the forum regarding this situation. For example, such positive feature was mentioned as wider access towards positive, useful and substantial information. However, there’re also enough negative and often truly provocative stove-piping with far-reaching inten-tions. Remarkably, but this was told from a rostrum by journalists and the military: tendentiously selected information has become an element of so called hybrid wars. Meanwhile, the Chairman of the National State TV and Radio Company of Belarus, Gennady Davydko, emphatically asserted behind-the-scenes, “It’s time to call things by their proper names. The third world war is going on — information war. It comes through human brains and souls but the goal is the same — redivision of the world.”

The participants of the forum discussed the contemporary world in the epoch of new geopolitical realias during a panel discus-sion. According to Editor-in-Chief of the Sovetskaya Belorussiya, Pavel Yakubovich, popularisation of the world leads to atomiza-tion. New challenges come as a surprise for society. The role of mass media significantly enhance, since people receive information from global media, which try to service the interests of some forces.

Director General of Rossiyskaya Gazeta FSBI, Pavel Negoitsa, told us how to work under such conditions. Western press slops much negative information over Russia. Nevertheless, it actively publishes objective information about Russia’s role in the Second World War… on commercial conditions. Such collaboration is conducted with 30 editions in 24 countries of the world. However, it’s evident that these media wouldn’t publish the content contradicting their editorial policy not for all money of the world.

“The world is much more complex than we can imagine,” noted Mr. Negoitsa. “Journalists often ‘skate’ along the surface and don’t have time to penetrate deep into history, so we can’t do without gathering smart interlocutors around the newspaper.”

In total, the Belarusian International Media Forum proved that it remains a recognised discussion venue for media representa-tives of the post-Soviet space. It hosted the session of the heads of state news agencies of the CIS. The forum adopted a resolution which calls on towards objective coverage of public issues, aimed to reach dialogue, in order not to allow skating into the abyss of information wars of ‘every one against every one’. Nevertheless, the resolution of the 10th Belarusian International Media Forum noted that information provocations have become a daily routine.

The volume of disinformation considerably surpasses the volume of objective data, coming through mass media. This may lead to discrediting of the profession of journalists and loss of trust towards words. The resolution notes that it can be prevented through observing the norms of journalism ethics, developed on the basis of long-term experience, corporate solidarity and mini-mization of influence of up-to-the-minute political situation on the editorial policy. Moral and social responsibility of journalists acquires the most vital meaning. In other words, the importance of professional journalism rises repeatedly.