Symbol of the festive evening

Just as children cannot imagine the New Year without gifts from Father Frost, so adults cannot imagine a table of tasty food without champagne. Undoubtedly, it is the most festive beverage! How would we celebrate New Year without the moment of anticipation before the cork pops, the clink of glasses and the first sips as bells chime, accompanied by wishes of happiness, smiles and laughter? At such a moment, we cannot doubt that the New Year holds wonderful times to come. 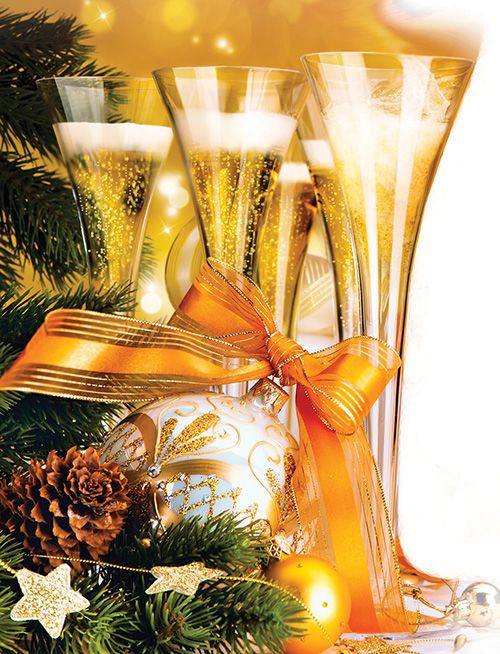 Most Belarusian families traditionally greet the New Year with the chink of glasses, the sparkling bubbles fizzing to the surface as the clock hands point to midnight. It is a custom which can never ‘grow old’.

No other beverage encapsulates festivity in such a way as champagne: like a firework of emotions and delight, it seems to have ‘magical’ properties. However, it was not always so, being once viewed as no more than a ‘by-product’ of wine production. Much time passed before it became an elite drink for those of taste.

Many, if not all, gastronomic delights emerged as a result of someone’s mistake or a casual coincidence of circumstances. Such is the case with champagne, a suspicious bottle having been found by the pupil of the monastery of St. Van, Dom Pierre Pérignon. On visiting the wine cellar, he saw that a bottle ‘had begun to sparkle’: then, the cork popped out noisily. So the production of French sparkling wine was launched; as the Benedictine monk was skilled and well educated, he was keen to understand what had happened and set about finding the best ‘recipe’ to reproduce the innovation. Pérignon discovered a method of blending, which is popular now: mixing grape varieties. For some time, the monks believed bubbles were formed under the influence of moonlight and took a mystical attitude to champagne. Of course, a stronger bottle was needed, since it had the power to shatter fragile vessels, and a special cork for the effervescent liquid. Some corks popped out all the time while others dried out in the neck and made the wine ‘sluggish’. The shape eventually settled upon actually enriches the taste and aroma of the drink: each cork was ‘pacified’ with a special bridle, called a muselet. Voilà! Meanwhile, the name was obvious, since it had been created in the French province of Champagne.

Champagne arrived in Russia one century later, meeting with instant approval. Naturally, they were keen to learn the secret recipe and much attempted replication ensued. To maintain their exclusive reputation, French winemakers forbade the use of the ‘label’ champagne unless the drink had been created in Champagne itself, using their unique (and secret) technology.

However, a national triumph occurred on the Crimean estate of Lev Golitsyn at the end of the 19th century; famous for his winemaking, the prince ‘conjured’ a recipe for champagne, selecting the best grape varieties, to create a truly great Russian sparkling wine. The result was even met with approval from Tsar Alexander III. Named ‘New Light’, Golitsyn’s wine was recognized in France, receiving the Grand Prix during a ‘blind’ sampling contest.

The arrival of the First World War, and then the Second World War, brought prohibition (the legal act of prohibiting the manufacture, storage, transportation and sale of alcohol, including alcoholic beverages). Sparkling wines might have easily ‘disappeared’ but then Iosif Stalin promoted their popularization, insisting that prices should be made affordable (with inexpensive production costs and fast manufacture). Chess player and chemist Anton Mikhailovich Frolov-Bagreev took on the task, nurturing ‘Soviet champagne’, so integral to our childhood memories. Appropriate varieties of grape were grown and, although the USSR collapsed, the plants remained.


Champagne not from Champagne

Only three varieties of grape are used in French Champagne, and local vineyards cannot hope to provide enough fruit to meet global demand. Accordingly, many countries use their own recipe to replicate the taste of the iconic drink. Of course, grape quality varies from year to year, depending on the weather, changing the taste of the finished product. As a result, for example, some ‘years’ of Belarusian champagne are better than others. Belarus buys its grapes from countries with a climate similar to that of France and uses international level technologies, as is recognized by numerous awards. For example, Minsk Grape Wines Factory has more than 120 awards from international competitions and tastings. Recently, exports began to the USA and other markets are opening up. The secret of our success may be the cold bottling method, which allows wine to keep its natural properties. Of course, we also have a unique recipe.

People in our country prefer ‘Soviet champagne’, inspiring Minsk plants to produce variations: Soviet sparkling wines ‘Golden’ and ‘Crystal’, alongside ‘Minsk’, ‘Grand de Luxe’, and ‘Radzivill’. Of course, there is also simply ‘Soviet champagne’. The difference lies not only in the design of bottle and label but the blending of each, to create a distinctive taste and aroma.

The true difference between French Champagne and other sparkling wines lies in the strictly determined varieties of grape and the method of manufacture. The pumping of carbon dioxide into ordinary white wine is the most simple method but such effervescence does not last long in the glass — making it ‘sparking’ rather than sparkling. The best sparkling wines, including Champagne, use secondary fermentation, with the addition of special wine yeast.

I won’t bore you with the processes of vinification and champagnisation, including remuage, dеgorgeage and other concepts. Instead, we’ll look at the more familiar process of drinking sparkling wine, which should be poured into a narrow, long-stemmed flute, to remain cool in the hand and to preserve the bubbles. Wider glasses are only used to create fancy pyramids. According to psychologists, the glass influences both the taste and our mood. Clear glass is associated with cleanliness, openness and lightness, promoting an atmosphere of reconciliation and trust. Sensitive people dislike coloured glasses, while those with an extravagant sense of humour often select glasses bearing a design.

Sparkling wine, filled with carbon dioxide bubbles, increases the surface area of the alcohol, allowing faster absorption, making us tipsy more quickly. However, the effects don’t last long. Champagne is often called a ladies’ drink, and there is a share of truth, since many female names promoted the distribution of this unique drink.

For me, champagne turns an ordinary day into a holiday. I love the game of tipping the New Year candle flames into wine glasses and recall a flying cork once hitting our chandelier directly above the table. By a miracle, nothing broke; it was only later, while we waved off our guests at the window, that the entire chandelier dropped with a roar. Its timing saved any of us from being injured: the New Year’s Eve miracle.

It’s been a long time since I’ve drunk alcohol, so champagne reminds me of my youth — and all its fun and pleasure. More than strong liquor, it is associated with major celebrations, such as weddings and New Year’s parties.

Champagne is a vital component in any holiday of hope. I remember that when I was a child my sister, brother and I were curious about this drink, observing our parents with a glass. One morning, we managed to try a forbidden drink left on the table. We did not understand it, but felt proud of ‘becoming adults’.

Alexey Dudarev, a playwright, and Chairman of the Belarusian Union of Theatrical Workers:

Champagne is like Mozart: it speaks for itself — as talented director Valery Maslyuk once said. Many other things have been said of this noisy drink, but I won’t repeat them.

About 20 years ago, a comical event happened at Minsk Sparkling Wines Factory, when I visited it as a part of a delegation, with German friends. We were invited to learn about the technological processes of manufacturing sparkling wine. Germany is famous for brewing, so it was interesting for them to compare methods. At the end of our excursion, we were invited for some friendly wine sampling and were treated to a show: a bottle of pink ‘Lev Golitsyn’ champagne was tossed, twisted and juggled before being uncorked, erupting like a fountain over all of us. The beautiful white shirts embroidered with Belarusian motifs, which our German friends had worn especially, were dappled. You can imagine the sea of emotions and laughter. Once home, the Germans were delighted to relate how the Belarusians had poured champagne over them.

Victor Alshevsky, member of the Belarusian Union of Artists:

I cannot imagine the New Year without champagne. It is possible to celebrate other holidays without it, but this — impossible! It’s certainly a tradition for us. The popping of the cork symbolizes so much. How could we do without such a ritual?

I’ve never really liked drinking alcohol but take a glass of champagne once a year, when the bells chime, to greet the New Year. This drink always creates a good mood, while making your head swim, eyes sparkle and skin flush. Women of any age become more feminine when they hold champagne (and drink in moderation). My elder daughter loves champagne and views it as a part of any celebration. When I look at her, I rejoice.

Champagne raises the spirits and puts us in a festive mood. Especially brut, cooled in snow: such an aura of freshness! I recommend cooling wine this way. I remember how, in Germany in the late 1990s, I came to understand the culture of drinking champagne. I was working as a restorer and my boss was an expert on expensive wines, so  he taught me to clink glasses correctly, holding the thin stem by two fingers, to gain the special ringing sound. I recollect this ritual and the pure sound of glass every time conversation turns to champagne.