Several years ago, Ostrovets was no more than a small settlement

Several years ago, Ostrovets was no more than a small settlement; now, it’s burgeoning into a bustling town. Its emblem features an oak, symbolising longevity and glory, with a huge trout beneath — standing for fertility, the realisation of dreams and justice. 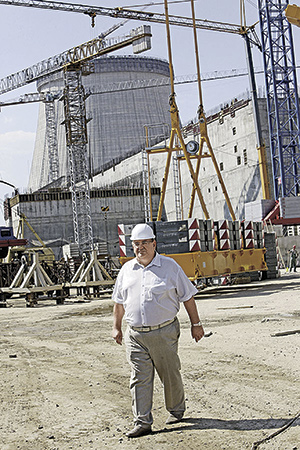 Touring the power station’s information centre, I was surprised to see a cinema. Staff from the future nuclear power station have also rented space within Ostrovets cultural and concert hall, to organise events, including film showings. Posters are everywhere. Meanwhile, there’s a huge map with red LED lights highlighting all the sites where nuclear power stations operate.

“Eight thousand people have already visited the centre,” I’m told. “They’ve all discovered how modern our project is, and that all processes are under strict control. However, our opponents haven’t been idle, trying to create panic by putting up posters about ‘Fukushima’, frightening elderly people that their villages will be destroyed, fields flooded and cows killed. We’ve had to visit villages independently, to talk to local residents.”

Life is in full swing in Ostrovets. New houses are being built, with those involved in the construction process provided with accommodation: engineers and ordinary workers. The General Director of the Belarusian Nuclear Electric Station RUE, Mikhail Filimonov, took us to the kindergarten at midday, while the children were sleeping. I could not but smile. I pondered that, since the project is to run for 60 years, it’s quite possible that some of the children sleeping would one day work at the new power station.
Mr. Filimonov replied that it seems very likely, and that the site may also operate much longer, as has been known elsewhere. This winter, a school opened in Ostrovets and, by 2020, the town’s population should have tripled, to reach 35,000. Local authorities are now planning facilities to supplement the existing clubs, school, hospital and kindergartens. 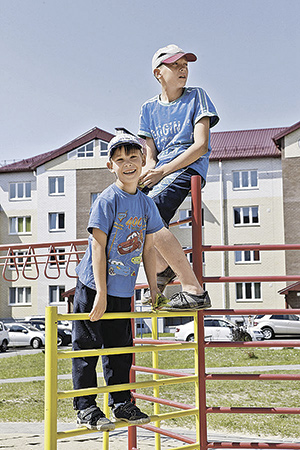 Entry to the site is by special permission only. Once inside, you can see production and supplementary blocks, a canteen, administrative buildings, workshops to assemble equipment and buildings where the first and second reactors will be managed. Most of the equipment has been produced in Russia, Belarus and third countries.

“The quality is under strict control, as the reinforced shell of the reactor must be able to withstand a plane crash (of 20 tonnes and at a speed of 100 metres per second),” underlines Belarus’ Deputy Energy Minister, Mikhail Mikhadyuk.

Over 4,000 people are currently working at the site and, next year, many more will come — totalling around 8,000. The Belarusian nuclear power station is being built under the Russian new-generation AES-2006 project (three plus); its system is unique in being automated, even during a ‘power cut’. The first reactor is to be launched in 2018 and the second in 2020: each with nominal output of 1,194 Megawatts.

Everything is on schedule at present, with equipment being installed gradually. Later, the most complicated stage will begin: commissioning tests. As foreign experience shows, pitfalls emerge usually at this stage. However, Mr. Mikhadyuk believes that no delays are likely. “The station must come into operation in conformity with our set deadlines,” he asserts.


The IAEA helped select the site for the nuclear power station, after undertaking inspections. The National Academy of Sciences named over 70 potential sites and, in 2008, Ostrovets was chosen. Criteria were tough, with 20th century records analysed. In 1908, an earthquake was registered in Ostrovets District but, although we cannot know its intensity for certain, it’s thought that any earthquake in Belarus is unlikely to be of more than 4.5 magnitude. The nuclear power station would easily withstand such a quake, as its reactor, steam plant and other equipment have shock-absorbers.