True summer has come to Minsk but hasn’t caught city dwellers unaware, offering plenty of spots to relax in comfort

True summer has come to Minsk but hasn’t caught city dwellers unaware, offering plenty of spots to relax in comfort. 
Komsomolskoe Lake, located in the north-western part of Minsk, is one of the most popular recreation places. This huge water reservoir occupies almost fifty hectares while the maximum depth in some places reaches 4.5m.

The lake’s construction started in 1940, and native Minskers well remember its history. The pit was dug with hands, since there was no specialised equipment or technique at that time. Within a year a grand opening was planned, featuring wind orchestras, concert grounds and amusement rides. The red flag with a star had been installed directly in the centre of the lake. There were also plans to build a stadium, seating 10,000, enabling spectators to admire future rowing competitions. However, these plans were broken by the war. 
Now, present-day Komsomolskoe Lake, with its many recreational features and facilities, is a place where both tourist and locals can easily spend the entire day. For the actively-inclined, the lake grounds feature bicycle paths, tennis, volleyball and basketball courts and an open-air training gym. Enjoy lunch on the char-grill barbecue facilities as you watch the catamarans on the lake. Children can enjoy the bouncy castles and playgrounds. Book a cruise on the double-decker ship, where you can take in the islands and the entire lake area. There are also many excellent cafes on-site. For the adventurous, there are camping areas, accessible only by catamaran — or swimming!

The southern bank of Komsomolskoe Lake is well-known for Pobedy Park, which stretches over 200 hectares. It was opened to honour victory in the Great Patriotic War. One can enjoy shady areas, away from the midday sun, take in the diverse birdlife, and walk among the babbling fountains. There are many playground areas for children, and it is also the site for the famous Museum of the Great Patriotic War History.

The Minsk — Hero-City Memorial is where we may conclude our tour around Komsomolskoe Lake. Annually, hundreds of Belarusians come here to celebrate Victory Day and Independence Day, as well as the New Year, marked with a traditional salute. For those who want to ‘take the waters’ without lea­ving the city, visit Minsk’s Water Sports Palace. Surrounded by houses and Minsk’s bustling streets, its secluded terrace provides an enjoyable hideaway for relaxation. Featuring an open-air mineral water pool, as well as a shallow children’s swimming pool, one can soak up the sun on lounge chairs or spread a picnic blanket on the grass. Since its opening six years ago, it is well-known to locals for launching the official ‘swimming season’ on the first day of summer. There are areas for volleyball and basketball courts, as well as playground for children. Popular with early risers, it is quieter in mid-afternoon.

The opening of the Lebyazhy Aqua-Park was a much-awaited event for local residents. Belarus’ first water amusement park is one of the largest venues of its kind in the CIS and Europe’s fifth largest. Occupying 32,000sq.m, Lebyazhy is able to house almost 2,000 people. Its pass-through capacity in summer reaches almost 8,000 people and visitors total 2.5 million annually. Designed to cater to Minsk weather, the aqua-park is divided into two areas: an open-air venue for summer and a closed venue, open all year round. No matter your age or interest, there’s plenty here that will delight and amuse. Children and the young at heart will love the children’s entertainment centre, with its thrilling amusement rides. There’s also a ‘territory of beauty’, offering an impressive array of health and beauty, and a training gym.

Life continues in the water park even at night due to lively parties. One can enjoy the beauty of the water reservoir from the park’s pierce and have a catamaran ride. Finally, one can also stay in the on-site hotel.

Another popular water recreation spot is ­Tsnyanka water reservoir. Easily accessible by tram, buses, trolley buses and mini-buses will also take you there. Of natural origin, the water reservoir occupies almost a hundred hectares, while the depth of the lake reaches eight metres in some places. Initially created over three decades ago for industrial purposes, the Belarusians took a fancy to the place and turned the lake into a recreation zone. Despite being located within the boundaries of the city of Minsk, the spacious park with its five beaches, gives a feeling that you’re somewhere in the countryside.

The Tsnyanka water reservoir has existed for 35 years already. Last year, a large-scale reconstruction was launched. As part of this, the administration of the district sought resident input into the re-naming of the five beaches. The new names now reflect the surrounds and atmosphere of the individual beaches.

Piers have been built at the revamped lake site where one can hand-feed ducks enjoy the sunset views. Sports and observation grounds were also added in addition to bicycle paths, and all picnic and barbecue facilities were upgraded, adding char-grills and arbours, making it a popular past-time for outdoor eating all year round.

A distinguishing feature to this location is the absence of cafes or shops, and perhaps this contributes to its peaceful countryside atmosphere. But at the height of summer, people are able to taste ice cream, since local authorities have envisaged an opportunity to connect equipment to the electrical grid.

Traditionally, Tsnyanka Lake is also the site for baptismal swimming. Each year, in January the amateurs of extreme types of cold-water training ritually swim there. In recent years they were joined by employees of the Emergency Ministry for whom the ancient custom has become a professional tradition. In spring, the arrival of swans to Tsnyanka Lake is eagerly anticipated and sightseers may enjoy feeding them. The swan’s graceful antics are always of special delight to young visitors.

One of the city’s largest fountains is located near the Bolshoi Opera and Ballet Theatre. Its capacity is 300,000 litres — enough to fill a stan­dard size swimming pool. Meanwhile, Minsk’s oldest fountain, ‘The Boy with a Swan’, located in the Alexandrovsky Park, is more than 140 years old Constructed to honour the first water pipe in Minsk, it is a well-known landmark.

One of the most visually striking fountains, located in Nezavisimosti Avenue, is worth visiting at night, when its 512 sprays are beautifully illuminated with many colours. 200kW of electricity is needed for this nightly light-show — similar to switching on simultaneously 200 electric kettles though the ‘Parus’ fountain at Komsomolskoe Lake consumes four times more energy.

The romantically-inclined may like to visit ‘Yunost’ fountain, with its fragile sculpture of a boy and girl, drinking together from a bowl of water. Located near St. Simeon and Helen Roman Catholic Church, it is said that if a person rubs the knee of one of the statues all troubles will disappear from personal life.

Another beautiful sculptural composition can be seen in the Yanka Kupala Park near the Circus, with bronze figures of young girls bending and throwing wreaths into the water. This depicts an old tradition to attract a bridegroom on the Kupalie holiday. 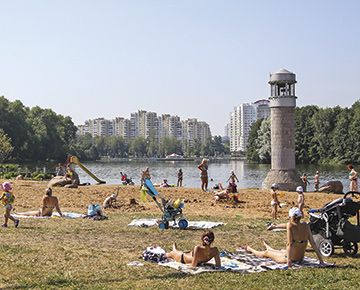