Ten Centuries of Art in Belarus exposition unites around 500 works — dating from the time of the Byzantine Empire until the modern day — on loan from 29 museums, as well as from corporate funds and private collections

Ten Centuries of Art in Belarus exposition unites around 500 works — dating from the time of the Byzantine Empire until the modern day — on loan from 29 museums, as well as from corporate funds and private collections 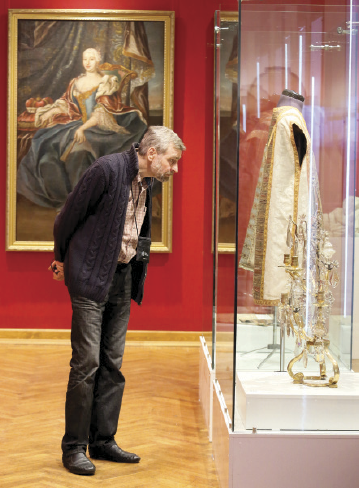 There’s no doubt that Ten Centuries of Art in Belarus stirs the soul and is worth seeing. The National Art Museum exhibition is magnificent, displaying works never been on show in our capital. At that time, the museum resembled a huge encyclopaedia in the history of Belarusian art, with each page revealing new epochs, styles, faces…

Among the organisers are Belgazprombank JSC, Gazprom Transgaz Belarus JSC, and the Ministry of Culture, alongside the National Art Museum. Covering 800 square metres, a stroll through the galleries takes you through every period of Belarusian art — as if perusing the pages of history.

Some works have barely been on show previously, having been ‘unearthed’ from the archives of the National Art Museum. A portrait of People’s Artiste of the USSR Stefaniya Stanyuta is one such example — painted by her father, Mikhail Stanyuta. Others have been sent in from regional archives. A Slutsk belt and 12th century golden pendant have been brought in from Molodechno. Meanwhile, the 1588 Statute of the Grand Duchy of Lithuania is on loan from Mogilev, and a crown for the 18-19th century Torah has been sent from Pinsk.

The artworks, recently acquired by Belgazprombank, have become true diamonds of the exhibition. For several years the institution has been buying works by artists born in Belarus, who acquired international recognition abroad. Among their acquisition is The Portrait of Thomas Zahn, by Walenty Wankowicz: his only remaining original work. Despite the House-Museum of Wankowicz having been open for 13 years (as a branch of the National Art Museum) the former estate of the Wankowicz family was restored only last year. The painting has finally returned to its homeland. 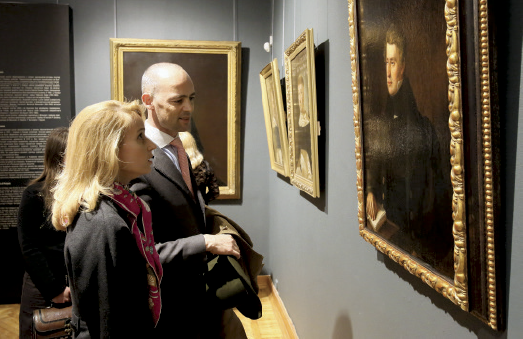 
Another treasure is Simeon Polotsky’s book Rod of Government, published in 1667. Two paintings by world famous Belarusian artist Marc Chagall were also on show, created in his early years as an artist. Another on display was by our well-known compatriot Chaïm Soutine. His portrait, Eva, was the most valuable at the exhibition having been purchased at auction from Sotheby’s in New York for $1,860,000. In 2012, Belgazprombank also purchased Soutine’s Les grands prés à Chartres (Big Lawns in Chartres).

Almost every exhibit was on show in some manner in Minsk ‘for the first time’. A renewed copy of the Cross of St. Yevfrosiniya was brought from Polotsk to Minsk to join the exhibition for a single day, for the grand opening. Created by Nikolay Kuzmich, it allows us to admire the beauty of the original, which disappeared in 1941. It has now returned to Polotsk’s Saviour Monastery of St. Yevfrosiniya. Later it was again brought for another day, as there were too many people wishing to see the relic. 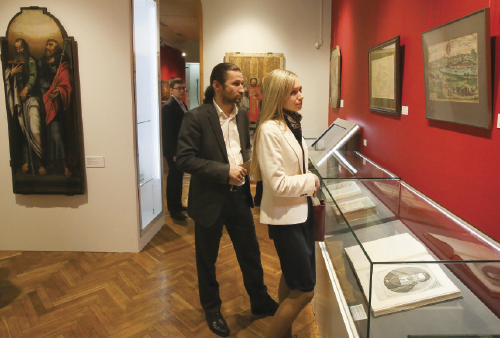 Even the organisation of the exhibition is interesting, occupying two floors of the museum, including the lobby and gallery. Planned by experts from Belarus, Lithuania and Russia, the exhibition has transformed the museum. Truly, it was an event not be missed for those keen to learn about our history and culture.

At the exhibition opening, Minister  of Culture, Boris Svetlov, announced that the event was a ‘phenomenon, showing centuries of creativity among those who once occupied today’s territory of Belarus’. He explained, “Even today, in our times of globalisation and standardisation, our artistic characteristics remain; tradition serves as a reliable basis for new creative achievements. Monuments of art and culture, as no other, have harmoniously interwoven the traditions of various ethnicities, confessions, styles and directions in Belarus. The world already recognises such concepts as ‘Belarusian iconography’, ‘Belarusian carving’, ‘Slutsk belts’ and ‘Vitebsk’s art school’, testifying to world recognition of achievements of the domestic art.” 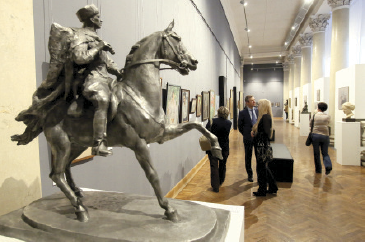 The Ministry of Culture has been actively working with private companies and banks to promote Belarusian art at home and abroad, with Belgazprombank acting as a reliable sponsor of important cultural events. Its initiative and support brought about The School of Paris: Artists from Belarus: the first stage of the major Art-Belarus project.

Therefore, Ten Centuries of Art in Belarus is more than an exhibition at the National Art Museum. It is a cultural project of national level: a landmark for Belarus. Private collectors, and museums within Belarus and abroad have contributed works for display. “I feel confident that Belarusians and foreign tourists will discover much that is new and important. For the first time in the history of independent Belarus, they can see our country’s art in all its variety and magnificence,” commented Mr. Svetlov. 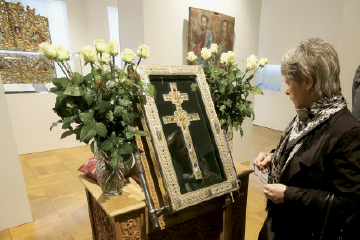 
During four months residents and guests of Minsk were able to get acquainted with outstanding examples of Belarusian art, with many exhibits on show publicly for the first time — and, certainly, for the first time gathered to show ten centuries of art: from the days of the Byzantine Empire to the present! With almost 500 treasures presented, all chosen by experts and with many having been restored for the occasion, the event has involved almost all regional museums of the country.

The Chairman of Belgazprombank’s Board, Viktor Babaryko, emphasises, “Analysis of the evolution of culture across Belarusian lands shows the continuity of the creative process — even during the most tragic periods of our history. Unfortunately, many works of art were destroyed during wars and social unrest but many were also saved, having been taken out of Belarus. Ironically, this is why they survived. Without challenging the legitimate rights of their new owners, it is necessary to undertake all possible efforts to work jointly in gaining access: via exchange exhibitions, purchasing works at auctions, or from private collectors, or temporary loan.”

Preparations for the exhibition involved analysis of cultural history in Belarus and modern trends of its development, helping us gain a better overview of art through the ages and helping us promote works by modern artists — in Belarus and abroad. A more complete understanding of domestic art helps us to forecast further developments in world culture. The exhibition aimed to allow all visitors, regardless of their level of artistic education, to gain an independent appreciation of Belarusian art, without the help of a guide — including an understanding of the challenges it has faced. 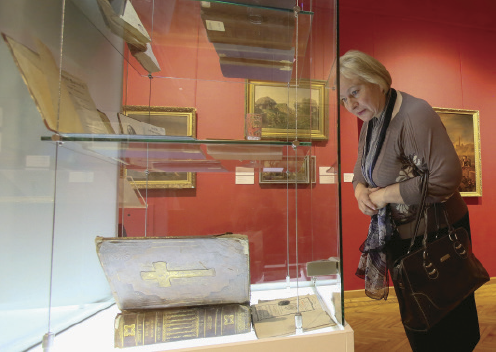 
“I hope that this task has been fulfilled and the exhibition, promoting wider interest among our fellow countrymen and guests of the country in the Belarusian art,” added Mr. Babaryko.

Meanwhile, the exhibition became that rare case when the development of concept of the artistic exposition was entrusted not to an art expert or a professional organiser of exhibitions. Due to the initiative of Belgazprombank JSC and the consent of the leadership of the National Art Museum an opportunity appeared to build an exposition in such a way that visitors were able to independently grasp the complex proves of art development in Belarus. For this a system of exposition organisation was developed that would reflect the evolution of art in Belarus in its fullness and continuity during ten centuries.

Vladimir Schastny, who came up with the idea for the exhibition and helped it to see the light of day, told us, “In selecting works, we chose them not just for their intrinsic professionalism or beauty, but for their role in contributing to the development of domestic and world art. Artists belonged to various ethnic groups and spoke various languages, yet all were born on lands which today comprise modern Belarus. They made their own, exclusive contribution to the development of domestic art.”

Lands which now form part of Belarus, due to their geographical position, have always been influenced by various cultural trends. Accordingly, it was a challenge to classify the 400+ works chosen for the exhibition strictly in styles and trends. In many cases, works and their authors are presented in subsections devoted to separate art schools, to give broad understanding of the definition. At the same time, the exhibition endeavours to construct a complete picture of the evolution of art in Belarus, while showing its place in world culture.

Ten Centuries of Art in Belarus exhibition, hosted by the National Art Museum from March 27th, was attended by 24,000 visitors. At the formal closing of the exposition, the Director General of the museum, Vladimir Prokoptsov, shared some details about the exhibition.

For example, 14,000 visitors bought tickets for the exhibition with another 10 thousand getting acquainted with it during the Night of Museums event. From the first day of work, the museum held 320 excursions; several hundred records have been left in the visitors’ book. Exhibition workers created paper and electronic catalogues and audio guides in Russian, Belarusian and English. They also put into operation a special mobile version of the website using a system of QR codes which allowed visitors to learn more about a work of art via their mobile device. During the exposition, visitors could visit four lectures devoted to the theme ‘Artistic associations of Belarus’.

According to Mr. Prokoptsov, the carrying out of the Ten Centuries of Art of Belarus exposition became a real master class for the museum. “It is a landmark project not only of the year, but also of the decade which gave us the chance to return to our roots,” he noted. They also intend to introduce the exposition at the 2nd National Museum Forum in Gomel in September of this year. The project will not only be shown in Belarus. Museum workers in China and Poland want to see the exhibition in their countries too. 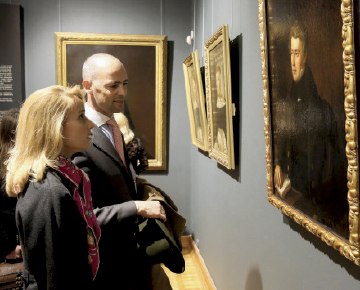