Round loaf was to taste


The theme of this year’s event was, `Feeding the planet. Energy for life`, thus harvest was an appropriate subject. Those Italians, who had not heard about our Dazhynki festival, now know a new word. Our traditional round loaf was also a new experience and one that was enjoyed by all. The exhibition offers an unmissable opportunity to taste food from many different countries. Prime Minister Andrei Kobyakov described how Belarusians have embraced the EXPO’s atmosphere, “Now Italy has numerous admirers of our dishes such as draniki and machanka. While many Italians have discovered that Belarus is both modern and beautiful.” 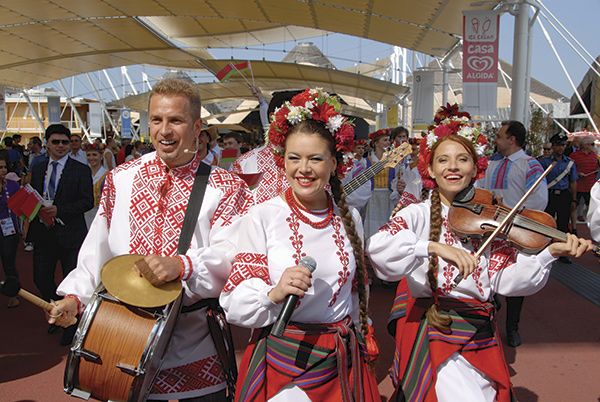 It is a little known fact that every tenth tractor and every third mine dump truck in the world comes from Belarus. Italy is the seventh most important trading partner of Belarus and last year the trade turnover between the two countries exceeded 2 billion Euros. Every year Italian families receive thousands children from Belarus, thanks to them strong ties between our people have developed. The director of the Belarusian exhibition hall, Natalia Kurash, described how, for four months, many Italian families visited our exhibition hall with their Belarusian guests. The Belarusian diaspora is notable in Italy. During the National day of Belarus I made the acquaintance of two Tatianas who have lived in Italy for many years. They do not forget their native land, moreover, they actively promote it: both are members of the society BellaRus (containing the Italian word bella which means ‘beautiful’), and they came to Milan purposefully to participate in our Dazhynki. They asked for photos, as they want to write about our ‘Beautiful Belarus’ for their local newspaper. 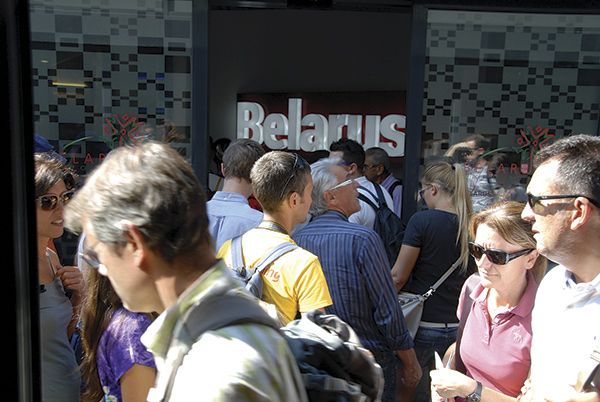 Beautiful people, a melodious language, picturesque costumes and song are heard as Belarus celebrated its National day during the EXPO. The organisers asked all participants to perform their national ceremonies, rituals, dances and songs connected with the agricultural cycle and traditions of harvesting in their countries. The choice for our day was natural: Dazhynki in Italy! Even if Italians and other visitors of the EXPO have not heard such a word almost all cultures have a harvest festival. The Prime Minister of Belarus explained, “The theme of the trade fair is `feeding the planet`, it is absolutely the right theme, but first of all it is necessary to feed our own people. Fortunately, the food problem in Belarus has been solved; moreover we have turned from net-importers into net-exporters of foodstuffs. Last year our agricultural exports totalled almost $6 billion. This year, in spite of the fact that it was difficult year in terms of natural-climatic conditions, we gathered almost a tonne of grain per head. The fact that we rank amongst the top-five countries exporting dairy products is also significant. It shows that we have good potential and advanced technology which we can showcase today.” 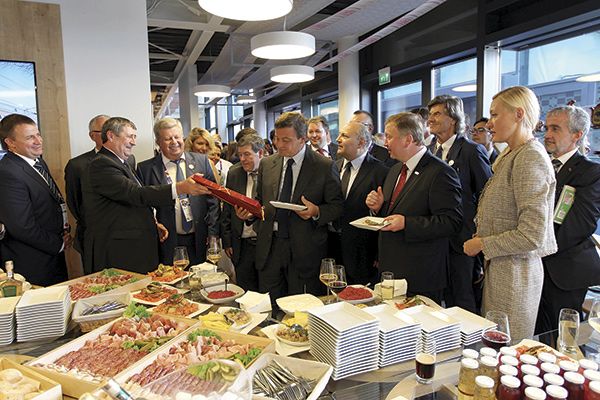 It is this business aspect of the exhibition that is hidden from the eyes of visitors who like Belarusian draniki, machanka and birch sap, but for the sake of which, hundreds of businessmen from every corner of the globe visit. According to Mr. Kobyakov, the results of Belarusian participation in EXPO-2015 will be collated later (the exhibition continues until October 31st), but it is already clear that there will be long-term benefits for our national economy and for the representation of Belarusians in the world. He added, “Imagine how many people come through our exhibition hall? About 50,000 every week! Some discover Belarus for the first time, while some see it from a new perspective of our industrial, tourism and cultural potential, they learn that there exists an attractive country in the centre of Europe and that it is possible to be on friendly terms with it in order to build business. That is worth a lot.” 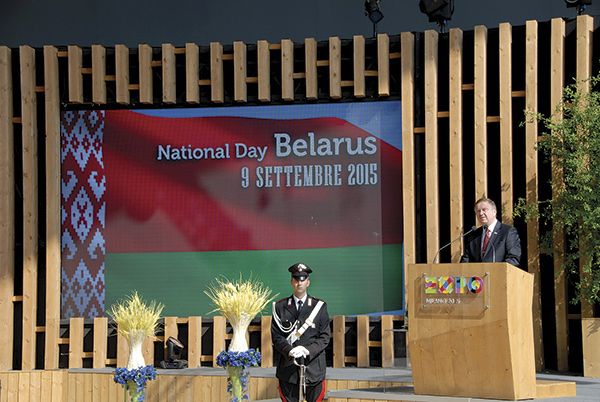 The First Deputy Minister for Italian Economic Development, Carlo Calenda, thanked our country for its considerable participation and praised Belarus’ adherence to the idea of food safety. Mr. Calenda explained how trade not only increases the income and general well being of the countries and people involved in it, but also brings people together. On September 11th there was a presentation of tourist opportunities in Belarus while Belarusian science days are to be held on September 29-30th. Mogilev and Minsk Regions will be demonstrating at the Milan platform until the end of October.