Romanticism not gone out of vogue

Schoolchildren of the Union State meet at tourist rally

Schoolchildren of the Union State meet at tourist rally

The tourist rally of schoolchildren of the Union State has already become a good tradition. For nine consecutive years now, girls and boys from various corners of Belarus and Russia gather for a week to spend an interesting time, to compete and to get to know more about the lives of each other. A year or two year-long tent camp is pitched on the territory of one country, and then after, moved to the neighbours’. This time, on the eve of the 70th anniversary of Belarus’ liberation from the Nazis, school children met on the shore of Lake Shvakshty of the Myadel District of the Minsk Region. These places in the Naroch area which experienced a great many troubled years during the war, are considered, rightly, to be a pearl of our country. 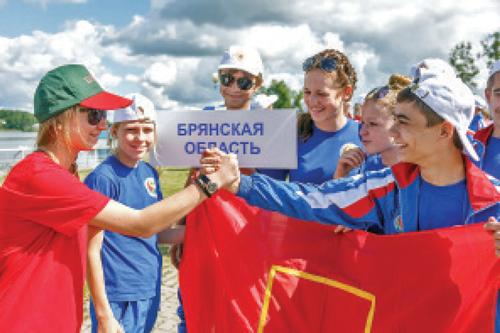 42 teams — 34 from various regions of Russia and 8 from Belarus — competed for the title of the craftiest, strongest, quickest and the most knowledgeable in the history and nature of their countries. Every team consisted of 10 schoolchildren, aged 14-17, plus two adult curators. There were a lot of opportunities to show one’s abilities — from orienteering to working at the Weekdays of Tourist Rally wall newspaper. Looking at these girls and boys, there is doubt that today’s generation of teenagers, like their parents in the past, enjoy the romanticism of tents, fires and songs accompanied by a guitar. Some participants of the competitions have been coming to the tourist rally for several years. For example, friends Lena and Tanya from the Vladimir Region. At the last year’s tourist rally, in Kaluga, they became acquainted with guys from Udmurtia, quickly found common interests and shared contacts. And when they came home, they continued to communicate via social networks. And now there has been a joyful reunion in the Myadel District.

Mikhail Orda, Head of Representative Office of the Permanent Committee of the Union State in Minsk, says that every participant of the tourist rally isn’t an accidental person, “This is an important event, where sharing experiences in the tourist work happens. And the rally helps to form civic position. Before coming here, they had to go through a series of competitions in their regions. Eventually the best and strongest found themselves at the rally.” Dasha Petrulevich and Natasha Petrova, ninth-form girls from Grodno, confirm that. To get to the tourist rally, they had to make many efforts.

The guys have taken all contests — from calling card to orienteering — seriously. For example, team from Rostov Region has learned a song about Belarusian Polesie. They say that they have found it on the Internet and understood that this is quite the thing. Natasha Zemlyanenko, a participant of the team, is mad keen on the chosen music composition, “Belarus is famous for its partisan movement, so such a battle song is just right! And it turns out that one of our boys plays the piano accordion. In short, everything has coincided!” So as in the atmosphere of the rally, the guys quickly found a common language, and it surprised nobody that a song about summer, Yalta and love, sung by girls from Kaluga, sounded from Sevastopol’s camp. The pupils invited each other and planned for the future summer months.

On the day of their arrival to Belarus, the participants of the rally visited Minsk’s Victory Square and laid flowers and garlands to the Eternal Flame. And now they don’t hide their emotions — at such monuments, the high sense of heroism of our forefathers is felt most acutely. And veterans of the war were not only honorary guests but, in spite of their advancing years, also judges at competitions. An excursion to the ‘Stalin Line’ Museum Complex and real soldier’s ‘mush’ for lunch — from a field kitchen — became the finale of the meeting. Next year, the 10th anniversary of the tourist rally of schoolchildren of the Union State, will be held in the Kursk Region and dedicated to the 70th anniversary of the Great Victory.