On arrival at the Svitanak boarding house for labour and war veterans, the President asked Director Yelena Varivonchik her opinion on how life for the elderly has changed.

On arrival at the Svitanak boarding house for labour and war veterans, the President asked Director Yelena Varivonchik her opinion on how life for the elderly has changed. She replied, “Our elderly are living better and longer.” Residents of the establishment spoke fondly of their lives, while drinking tea with the President. In echoes of his December 2010 visit, the first he had made to Svitanak, the home was described as a paradise for those who live there. 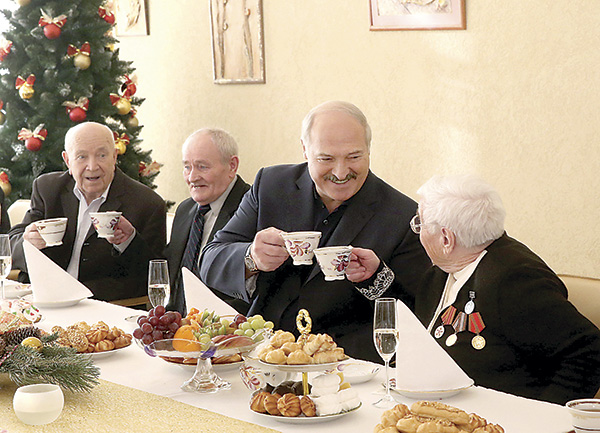 It’s a worthy tradition that both children and elderly people receive special attention during the Christmas and New Year period, but importantly, they receive no less attention on every other day of the year. Events such as those recently held in Treskovshchina, near Minsk, perfectly illustrate the core ideals of state social policy. Children are our future while the elderly are a valuable source of experience and merit. Care of both young and old generations shows that the society is healthy and the state respects itself.

Experience is valued highly in Svitanak, where people from all different backgrounds are to be found. On this occasion, the tea drinking ceremony gathered a former forensic expert, an honoured teacher, a doctor and several representatives of other professions. The President asked them about the running of the home and recent events and all those present eagerly shared their views. They spoke of the reform of the law enforcement system, educational programmes and the situation in other parts of the world. Interestingly, the elderly demonstrated a sound knowledge of events taking place both in Belarus and abroad. They live life to the full and are firmly in touch with reality. State social policy actively pursues this goal, aiming that people from the older generation should remain active members of the society for as long as possible.

According to the Labour and Social Protection Minister, Marianna Shchetkina, longevity has increased in the country in recent years. However, this results in a growing number of the elderly which could be considered a burden on society. With this in mind, the Ministry is developing different mechanisms to support old people. Some are assisted at home and others are invited to residential houses. Some are taken care of by state funding and others receive help on a paid basis. The rental institute is already demonstrating good results: an elderly person donates their property (usually accommodation) to the state and receives qualitative care and support instead. Ms. Shchetkina informed us that an updated comprehensive system for support of the elderly is to become fully operational in five years. The President has asked that this period should be reduced to three years. There are also plans to safeguard rental arrangements to prevent fraud. It’s no secret that some businessmen have been found to make use of old people’s vulnerability to take their property and leave them no money to live on. The President has demanded the introduction of measures to prevent such deals and has asked for assurances that the law should act seriously against those found guilty of cheating the elderly in this way.

On leaving, Mr. Lukashenko presented the residents with winter presents: down kerchiefs to the women and scarfs for the men. He refused to accept any words of gratitude: saying that this was merely the care and responsibility of the President.