Puppets over the Niemen

The Grodno Puppet Theatre has enjoyed many premieres and unusual stagings over its 240-year history, while welcoming performers from across the globe

The Grodno Puppet Theatre has enjoyed many premieres and unusual stagings over its 240-year history, while welcoming performers from across the globe. The Grodno puppeteers are also frequent guests at European events and entertain from various theatrical stages, being laureates of prestigious competitions. These days, it’s difficult to surprise audiences but Grodno’s International Puppets Over the Niemen Festival has worked hard to bring originality and innovation to its genre. 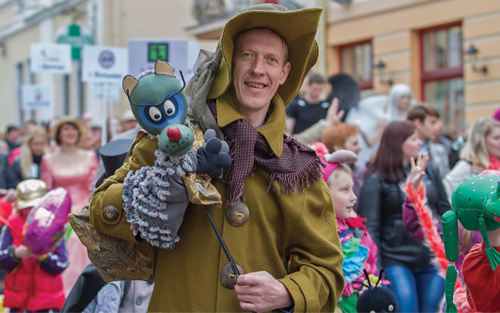 Last year, when the event was first hosted by the city on the River Niemen, it received wonderful feedback from participants. Recently, the second festival delighted visitors, with 20 theatres from 9 countries taking part: from Belarus, Russia, Lithuania, Poland and Ukraine, as well as newcomers Serbia, Estonia, the Czech Republic and Bulgaria.

Oleg Zhyugzhda, Art Director of the Festival and Chief Director of the Grodno Regional Puppet Theatre, tells us, “We’ve aspired to show the best of international modern theatre, so that our city on the Niemen can become known for more than just provincial art, but for major global trends. We chose not to participate in the competitive programme, so that the jury could be objective, but we certainly gave audiences something to admire: our most recent premiere — Faust. Dreams.”

The festival began with a colourful fancy-dress parade through the historic streets of the city, with puppets held high. Every participant received a puppet-angel ‘guardian’ to protect them. Of course, everyone was excited to see the performances, inspired by Serbian, Lithuanian, Czech and Ukrainian fairy and folk tales and Belarusian, Russian and English classics. Puppets Over the Niemen presented Grodno residents and city guests with a unique selection of entertainment.

Lele troupe, from Vilnius, also gave the audience a mime performance: Meteo, telling of a man’s struggle to restrain the elements of a dying planet.

The Belarusian State Puppet Theatre introduced national classics: Why People Grow Old, based on a work by poet and playwright Anatoly Vertinsky; and a version of Leo Tolstoy’s Kholstomer. The Brest theatre won the Grand Prix in 2013. Meanwhile, Russia’s Ivanovo Theatre acquainted young spectators with the music of Tchaikovsky, the actors using a rich figurative palette, creating ‘live’ pictures on glass.

Two lively, interactive performances were given in the open-air: the Czechs and Serbians gave their shows in the courtyard of Belarus’ Museum of Religious History: Prince Yaromil and Kuku Todore.

The five-day theatrical marathon on the banks of the Niemen ended with the announcement of the Grand Prix being awarded to the Białystok Puppet Theatre, for its Montagues and Capulets. Honoured cultural figure of Russia Valery Shadsky, who chaired the jury, delivered the news to unanimous approval from all gathered.

Several playwrights and troupes were mentioned across prestigious nominations. Alexey Lelyavsky, of the Belarusian State Puppet Theatre, was named ‘best director’ for Why People Grow Old. Meanwhile, ‘best set-designer’ went to the Khmelnitsky Academic Regional Puppet Theatre’s Mikhail Nikolayev, from Ukraine, for his work on Olenka and Ivanko. Lithuanian composer Šarūnas Datenis’ score for Meteo was also the centre of attention.

Rovno Academic Regional Puppet Theatre, from Ukraine, was awarded for ‘best acting ensemble’ in Christmas Night and individual awards went to Vladimir Tevasyan from the Brest Puppet Theatre, as ‘best male’ and to Klaipeda’s Renata Kutaite, from Lithuania, as ‘best actress’ for her performance in Magic Time of Cinderella.

For the first time, 20 young theatre critics, from Belarus, Russia and Ukraine, chose recipients for two diplomas: for ‘wise repertoire’ and for ‘best acting ensemble’. Both awards went to the troupe from Białystok. A special children’s jury, which included five Grodno pupils, selected Kaunas’ Swan Queen for an award, and the group from Ivanovo for an additional prize.

The Puppets Over the Niemen festival looks set to enjoy many years of success. The director of the Grodno Regional Puppet Theatre, Maria Shabashova, asserts, “I saw and felt the high spirits of many foreign visitors to our festival. We’re delighted that our guests enjoyed the festival. Puppeteers could see our ancient city, to visit its ancient castles, churches, to walk along historical places, and even simply to have rest in a cosy park, to admire Niemen… We’ve already received preliminary applications from theatres to take part in the third festival: planned for next year. I’m sure that we’ll see more participants for that event, extending the geography of entrants. Our theatre is now taking a break, but we’ll be bringing several premieres — for children and adults — in the new season.” 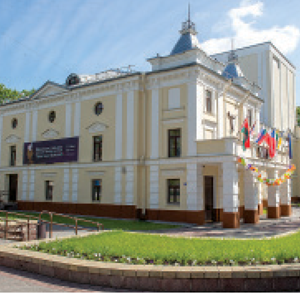 The Grodno Puppet Theatre is located in a building constructed in 1772, for city head Antony Tizengauz, in Italian style. It has a semi-circular design, with an amphitheatre of multilevel galleries, and 22 boxes. In 1859, after reconstruction, the auditorium gained an extra floor. For over two centuries, Tizengauz’s troupe performed on the old stage, as did Polish Salomea Deszner’s troupe, and the Russian-Polish Eliza Orzeszkowa Theatre. From 1945-1947, the State Russian Drama Theatre of the BSSR took residence, and then the regional drama theatre took possession, until 1984. Since then, ‘puppeteers’ have occupied the building. Reconstruction was complete by late 2012, giving the building new offices and a museum of puppets, which is now displaying some of the ‘heroes’ of the Puppets Over the Niemen festival.