The National Academic Bolshoi Opera and Ballet Theatre of the Republic of Belarus never ceases to surprise, charm and please us

The National Academic Bolshoi Opera and Ballet Theatre of the Republic of Belarus never ceases to surprise, charm and please us. Its interpretation of Tsar`s Bride, by Nikolai Rimsky-Korsakov, is a Russian operatic gem. It was first staged by Mikhail Pandzhavidze more than six years ago, at the Ekaterinburg Opera and Ballet Theatre, and has now been revived in dynamic and expressive fashion for Minsk audiences. I watched the dress-rehearsal of Tsar`s Bride alongside other journalists on the eve of opening night, with the show followed by a press-conference with Director Mikhail Pandzhavidze, joined by Musical Director Nikolay Kolyadko, Art Director Alexander Kostyuchenko and Deputy Director General Vladimir Rylatko. As ever, the Bolshoi Theatre invited us onto the stage to chat to the production crew, and to feel the spirit of the performance from ‘inside’ the set.

Mr. Kostyuchenko’s set certainly evokes another age, using much natural wood (as used to build the boyar towers in Ivan the Terrible’s time). He explains that his choice was governed by a desire to evoke an historical atmosphere. I already know Mr. Kostyuchenko to be a talented stage designer, being sympathetic to the needs of the musical score, and the director. However, the scenery for Tsar`s Bride surpasses his usual excellence, convincing us immediately of the ‘reality’ of what is portrayed on stage. Mr. Pandzhavidze emphasises that the scenery is precisely calculated, using arches at various levels, so that voices on stage are amplified and given clarity. Meanwhile, the sets are light enough to be easily moved around, as needed between scenes. 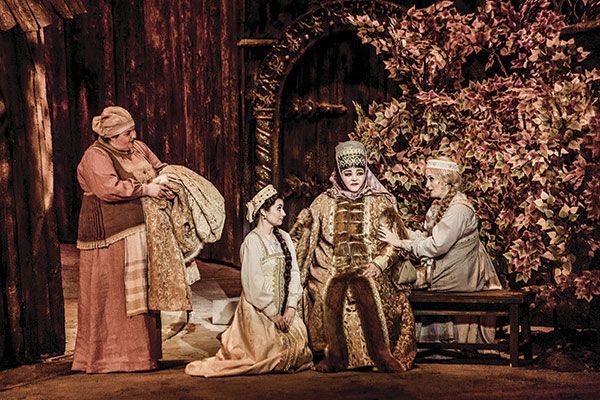 The actors feel comfortable in the sets of Alexander Kostyuchenko. A scene from the performance

He underlines that the opera has a traditional feel, rather than being avant-garde. It has a deeply Russian atmosphere, reflecting that difficult period of time for the unification of the Russian state, when the Tsar`s oprichnina cruelly persecuted the boyars. Against this background, it explores our relationship with power: for those who possess it and those who do not.

In his interview with Sputnik News Agency (http://ru.sputnik.by/culture/20150325/1014455565.html), he tells us, “The Tsar`s Bride explores the tsar’s relationship with the state. Ivan the Terrible’s personality is hotly disputed through history, since he was both gifted literarily (writing holy canons) and a harsh leader (being called ‘Terrible’). Power, as a concept, has nothing to do with morality. However, it cannot be weak, since this would prevent it from protecting itself and its interests — and, thereby, its own people.” 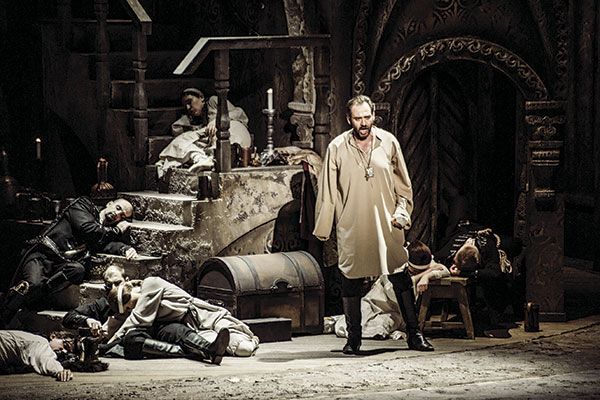 Deep and powerful baritone of Stanislav Trifonov, as Grigory Gryaznoy, enchants by feelings of his character

Chorus Master Nina Lomanovich stresses that the opera is based on true events and is rare in its genre regarding its depth of sincerity, cordiality and natural melodies. “It is a source of pure art,” notes Musical Director Nikolay Kolyadko. The work is his first by Rimsky-Korsakov, but has greatly enriched him, as he has told Parter journal. He asserts that neither before nor since Tsar`s Bride has the composer created such a complete opera in terms of dynamism of action, while being successfully melodious and full of captivating arias, ensembles and choruses.

It’s no wonder that Mr. Pandzhavidze was attracted by Tsar`s Bride, which requires powerful voices for its performance: a perfect match for the Bolshoi Theatre. It’s almost as if each part has been designed for our Belarusian performers. Leading soloists from two casts have been chosen: People’s Artistes of Belarus Vladimir Petrov and Vasily Kovalchuk, Honoured Artistes of Belarus Vladimir Gromov, Oksana Volkova, Alexander Keda and Anastasia Moskvina, and laureates of international competitions Natalia Akinina, Andrey Valenty, Tatiana Gavrilova, Yekaterina Golovleva, Yelena Zolova, Eduard Martynyuk, Pavel Petrov and Stanislav Trifonov. 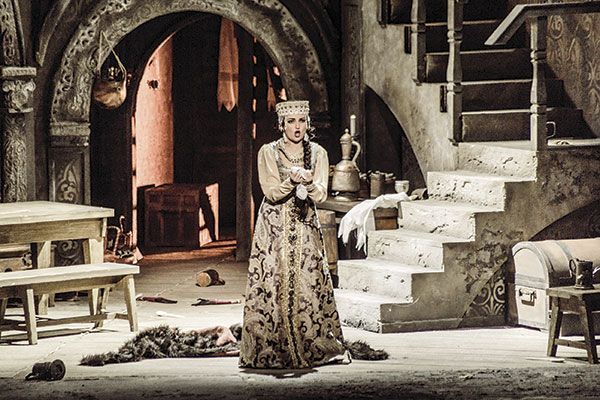 Deep mezzo-soprano of Oksana Volkova, as Lyubasha, is touching for the audience

The opera’s plot involves typical romantic dramatic elements. Marfa Sobakina (Tatiana Gavrilova), the daughter of a Novgorod merchant, is in love with a young boyar, Ivan Lykov (Victor Mendelev), as is the Tsar’s oprichnik, Grigory Gryaznoy (Stanislav Trifonov); both are thwarted when the Tsar selects Marfa as his bride. However, Gryaznoy’s jealous mistress, Lyubasha (Oksana Volkova), chooses to poison her rival.
Since its opening night, in 1933, it has become a classic in the repertoire of the Bolshoi Theatre (previously called Oprichniks). In 1938, a new staging came into being, with a third in 1950. The last was staged for almost 60 years, a record shared by Aida.

The latest staging of The Tsar`s Bride is sure to prove a lasting legacy, being immediately impressive. From the opening bars of the beautiful ‘Russian national style’ overture, whose melody flows into your soul, the audience is drawn into another world. Meanwhile, the set is incredibly authentic, with its icons, well and carved porch. The first words of the prologue, spoken by Stanislav Trifonov, as Grigory Gryazny, reveal fine Russian speech [the libretto was written by Nikolai Rimsky-Korsakov and Ilya Tyumenev who based his script on the eponymous play by Lev Mey]. Every word has clarity and Trifonov’s passionate baritone speaks volumes, being powerful, confident and bewitching. He commands the audience’s attention.
The same is true of the outstanding, deep mezzo-soprano of Oksana Volkova, as Lyubasha. We feel her spiritual unrest and are moved; although her actions are malevolent, she inspires empathy. Just as touching is the sacrificial love of Tatiana Gavrilova’s Marfa, with her crystal-pure soprano. Her father, played by Vasily Kovalchuk, is the epitome of paternal kindness, portrayed through a strong, rich bass. Each member of the cast ‘lives’ their role with such skill that we cannot help but feel their emotions. 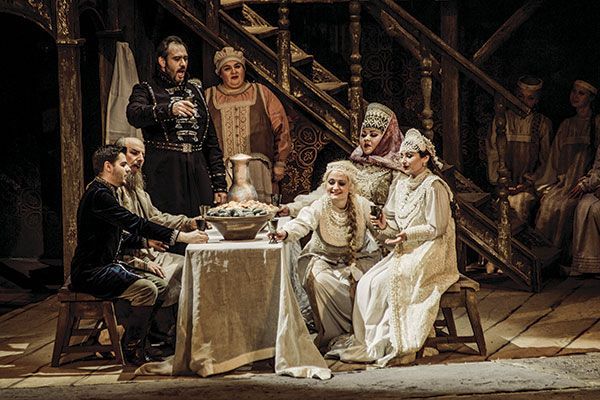 Each of the actors plays his part excellently. A scene of Marfa’s engagement to marry

Mikhail Pandzhavidze’s ability to create psychologically powerful characters is well proven, and we’d expect nothing less from Tsar`s Bride. His soloists and chorus are utterly professional, not only delighting us with their singing but convincing us with their acting. Each personifies his character meticulously and each stage movement is perfectly choreographed: linked, justified and harmonious. We feel the greater scope of the action and its relation to eternal themes. Fates are interwoven in the struggle for power and influence. We see their jealousy, fidelity, treachery and the many shades of love: unrequited, forced and devotional.
This beautiful and sad story from a distant age becomes plausible in these expert hands and, though long, appears as one breath. This seemingly ‘common-place’ story of unrequited love and the struggles of power could have easily strayed into the realm of ‘fantasy’, especially when accompanied by Rimsky-Korsakov’s score, which revels in the Russian soul in such a way.

Nikolay Kolyadko recognises the mysticism of the story, saying, “If we depart from an ordinary understanding of the plot, seeing its tragic scope, we can unravel the mystery hidden in this opera’s beautiful music, with its wonderful tone and dynamic orchestra. It gives the impression of a melodious and dramatic game and reveals the secret essence of the Russian soul through its archetypal characters: strong, passionate, spiritually perturbed, repentant and courageous, yet patient, resignedly submissive and obedient.”
The Bolshoi Theatre has managed to solve the puzzle of these eternal themes, giving us insight into what often is left unsaid. 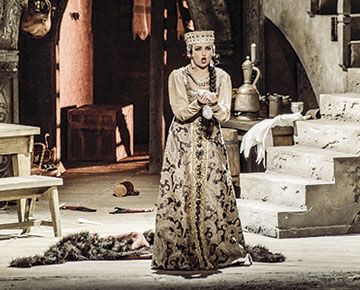