Pills for all problems

One of the most technological and knowledge-intensive union programmes — ‘BelRosTransgen’ — yields practical results. This long-term project began in 2003 and had an ambitious aim — to begin production of medicinal drugs with the unique protein, human lactoferrin. According to the programme, they could raise a herd of goats with the introduced human gene. They created all conditions for these unique animals at a special firm in Research and Practical Centre on Animal Breeding of the National Academy of Sciences of Belarus, not far from Zhodino town. Recently, Grigory Rapota, Secretary of the Union State, visited the centre and got acquainted with the realisation of the programme. 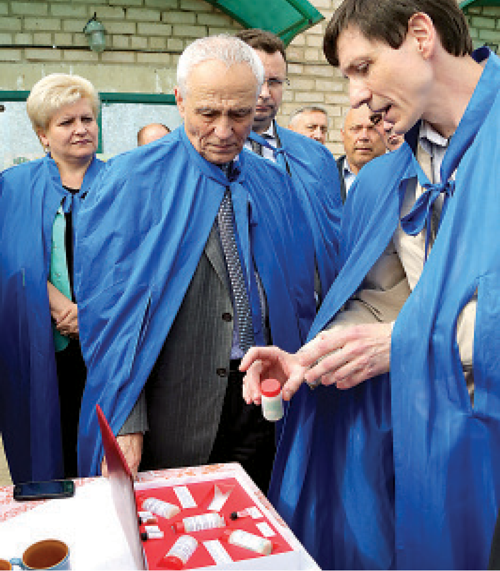 It is sufficient to look at the list of unique characteristics of lactoferrin to make sure of the exceptional importance of this work by the Belarusian and Russian scientists. It strengthens immunity, has an anti-inflammatory effect, lactoferrin can be antibiotic by itself but without self-tapering. It can be used also in the production of artificial food for infants.

Ivan Sheyko, First Deputy Director General of the Scientific and Practical Centre on Animal Breeding of the National Academy of Sciences of Belarus, Doctor of Agricultural Science, Member of the Academy, tells about everything that they could realise within the framework of the programme. “This year is a transition period from the ‘BelRosTransgen’ programme to the ‘BelRosFarm’ programme. The task of the first project had been the creation of technology for the getting of primary transgenic animals. This was achieved in 2007. The second phase of the ‘BelRosTransgen’ programme was the breeding of these animals. By the end of 2013, we had about 200 transgenic animals already. From the goats’ milk, we could get a sufficiently large amount of lactoferrin — about 6 grams per litre.”

Certainly, considerable volumes of protein are needed for mass production of medicinal products with lactoferrin and food additives containing it. So, it is necessary to come over to an industrial form of its extraction from milk. Currently, Russian colleagues have set standards here — project partners from Nizhny Novgorod have already bought, and are installing associated hardware. Belarusian scientists brood over plans on the purchasing of an installation which will allow for the processing of milk from existing livestock effectively. In the future, heavy duty equipment will be needed as the number of transgenic animals is permanently increasing. A new farm for 250 goats and 500 young animals is being built especially, as well as an experimental processing module, where they will evolve protein.

Grigory Rapota, Secretary of the Union State, has estimated the scene in the scientific and practical centre and the results of the execution of the ‘BelRosTransgen’ programme. “In theory, I have known what happens here, but it has been important to form some impression. What the flock and the final product are like and which scientific work is being done to work out the issue of evolving of human lactoferrin from milk. And this impression is contradictory. On the one hand, I see that the work is delicate, meticulous and demands great patience, and it has been conducted to a large extent. It is a very knowledge-intensive product and there is a lot of high qualification here. On the other hand, it is obvious that we still have a lot to do. We haven’t reached our final goal, where we could say that the programme has been finished, and when we could kick-start production and put a full stop to this part.”

Realisation of the programme will continue as a programme entitled ‘BelRosFarm’. Calculated to run until 2018, it stipulates development of technologies for industrial production of medicines, food additives and products on the basis of lactoferrin.