Never too many good proposals

Never too many good proposals 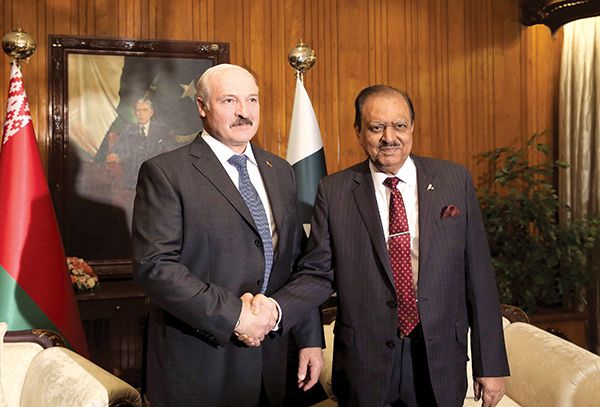 Our two states’ trade-economic collaboration is yet to be stable in nature, having fluctuated between $50 mln and $120 mln over the past eight years. However, huge potential is possible if a systematic approach can be applied. Clearly, top-level talks are essential.

At the moment, Pakistan is focusing on the agrarian sector, involving a major share of its population in working the land, and with prospects for developing other branches. Pakistan is among 11 states which — alongside BRICS members — enjoy great potential for becoming major world economies this century. The mining industry should bring significant benefits, since the country boasts deposits of gas, oil, chrome ore, marble, sodium salt, uranium, limestone, phosphate rock, barites, sulphur, and precious and semi-precious stones. Deposits are modest in volume but fully investigated and the experience of Belarusian specialists may prove useful.


Alexander Lukashenko during his meeting with President of Pakistan Mamnoon Hussain:

Our relations are efficiently developing and we have virtually no problems in the sphere of politics. We co-operate within international organisations and support each other. We should continue to follow this path, involving members of parliament and heads of Government agencies. As regards economics, serious work lies ahead


Minsk and Islamabad share many points of business interaction and recent talks were conducted at all levels.

Summing up the results of their talks, the Belarusian President stressed that our bilateral agreements now take the form of two-dozen signed documents. “In Belarus, we view Pakistan as a leader in the Muslim world and it’s important that such a country is represented at the centre of Europe,” he said.

It has been agreed that a Pakistani embassy will open in Minsk, with a land plot allocated for building.

A major Belarusian delegation visited Pakistan jointly with the President, including ministers, and heads of major state and private companies; as a result of talks, they have agreed to establish joint facilities in both countries, to manufacture high-demand products.

Mr. Lukashenko noted Belarus’ recent visit from China’s Chairman, Xi Jinping, with the heads of state visiting the construction site of the Chinese-Belarusian Industrial Park, near Minsk. It is to host production facilities for the world’s most advanced companies. The President noted, “This project is part of an economic concept for China’s Silk Road. We invite your companies to participate, setting up their facilities at this technological park. We’ll create all necessary conditions, offering unprecedented privileges.”

According to Mr. Lukashenko, our country is interested in seeing Pakistan set up modern sewing and textile facilities. He asserted, “You have great experience in this field and we offer an industrial platform, being ready to establish joint modern production plants at the centre of Europe. Your products, manufactured at these facilities, alongside our own, would enjoy great demand across former Soviet states, which currently import from abroad. Your goods would be competitive on the European market as well. 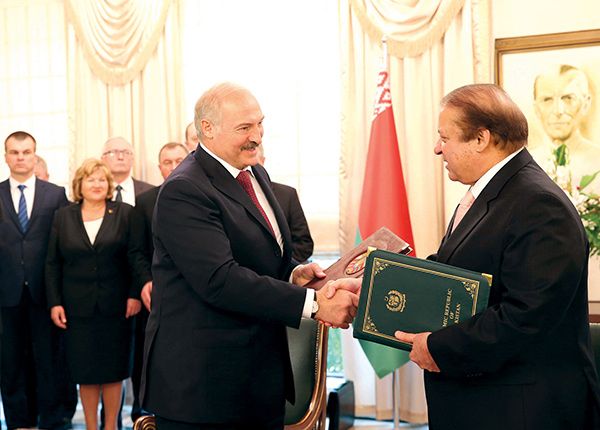 Clearly, our two states have the political will and business motivation for dynamic and productive interaction across all spheres.
The signing of the Islamabad Declaration of Belarus-Pakistan Partnership,
by Mr. Lukashenko and Mr. Sharif, was an important result of talks, while delegation members concluded around two-dozen agreements and memorandums

The foreign ministries of Belarus and Pakistan have signed a memorandum on mutual understanding for the establishment of a mechanism of bilateral consultations. In turn, Belarus’ Justice Ministry has joined Pakistan’s Ministry of Law, Justice and Human Rights in signing a memorandum on mutual co-operation. Another agreement foresees launching a Belarusian-Pakistani joint business council.

Agreements on collaboration in the spheres of education and culture were signed: by Mogilev’s Regional Executive Committee and the Government of the Punjab Province; by the Belarusian Chamber of Commerce and Industry and the Federation of Pakistani Chambers of Commerce and Industry; by Belarus’ National State TV and Radio Company and Pakistan Television Corporation State TV and Radio Company; and by the Belarusian State University and the University of Quaid-i-Azam.

In addition, memorandums on mutual understanding were signed in the fields of industry, agriculture and food, science and technologies, and investments. Such documents were also signed between the national libraries of Belarus and Pakistan and between the Belarusian State University of Informatics and Radio-electronics and Pakistan’s National University of Sciences and Technologies.

The Belarusian President’s visit to Pakistan included official meetings, and the symbolic planting of a tree in Shakarparian Park, in Islamabad’s historical centre: a popular spot for tourists and city residents. A national Monument of Pakistan is situated on one of its two hills, with the second accommodating a leisure park, which always gathers crowds. The amazing site unites the spirit of historical traditions and focuses on the country’s peaceful and calm development.

The President of Belarus wrote in the book of honorary guests: ‘I’m impressed with Islamabad’s Shakarparian Park, which eloquently embodies Pakistan’s unity and its intention to live peacefully with the nations of the world. Let the tree — which I’ve planted today — be a symbol of the friendly relations between Belarus and Pakistan, their dynamic development and flourishing’.


Clearly, our two states have the political will and business motivation for dynamic and productive interaction across all spheres. The signing of the Islamabad Declaration of Belarus-Pakistan Partnership, by Mr. Lukashenko and Mr. Sharif, was an important result of talks, while delegation members concluded around two-dozen agreements and memorandums.

The Belarusian President and Pakistan’s Prime Minister later told journalists the results of their talks and declarations, with mutual trade, investment exchange and cultural contacts to the fore. In the sphere of politics, inter-parliamentary co-operation and expanded bilateral and inter-regional contacts are to be given attention. Meanwhile, close interaction on the international arena — primarily in the UN — remains vital, for Minsk and Islamabad.

Mr. Lukashenko invited the Pakistani Prime Minister to Belarus and Mr. Sharif accepted his invitation with pleasure, intending to arrive in August, with a major governmental and business delegation. The President has promised to seriously prepare for the meeting.

A session of the Business Co-operation Council is to take place immediately prior to Mr. Sharif’s visit to Belarus, to ensure that all memorandums and agreements signed recently transform into concrete contacts, as the President has proposed.

Importantly, both states are keen to establish joint production facilities, in Belarus and Pakistan. The process has already launched, with Mr. Lukashenko presenting Mr. Sharif with a certificate on the first Belarusian tractor assembled in Pakistan. No doubt, the future will be full of activity.


Vladimir Gusakov, the Chairman of the Presidium of the National Academy of Sciences of Belarus:

“Our colleagues are primarily interested in co-operation in the field of space research. I’ve shown them our programme features, including satellite images of Pakistani territory. They’re very interested and are equally so towards our unmanned aerial vehicles, biotechnologies, agricultural engineering and agricultural technologies. We’ve just introduced about 40 specific projects for collaboration, for study by our colleagues. We’ve agreed that, in the near future, a group of scientists from the Academy of Scientists will travel to Pakistan to make detailed plans of co-operation. A little later, a delegation of Pakistan’s scientists will come to Belarus. I think our co-operation will prove fruitful, as there’s great mutual interest.”


Lilia Ananich, the Minister of Information:

“In Belarus, there is great interest in journalistic training; we keenly desire to establish a regular and rapid exchange of new information and cultural projects, creating joint projects for television, including artistic series, which are very popular. We are interested in the experience of Pakistan in terms of information security and there is mutual interest in publishing liaisons: primarily in the production of textbooks. Our Pakistani colleagues are ready to participate in our exhibition projects. We understand that economic progress will be possible only when countries and people better understand each other. In this respect, we’ve enjoyed informative conversation with the Special Representative of the Prime Minister of Pakistan for National Development and Information Issues. We’ve spoken at length about the importance of communication. Pakistan is directing its attention towards Europe and views Belarus as an island of stability, bringing together various economic and political vectors. In promoting our country, we must understand the importance of Belarus’ role in the wider world. Europe and Asia are scrutinising us, as is the whole globe, without exaggeration. We should appreciate this, take pride in the fact, and use it to our advantage.”

Currently, the economy of Pakistan is showing obvious bias towards the agricultural sector, where most of the population works. However, it has prospects for developing other industries, being among the top 11 states (along with BRICS countries) with the greatest potential to become one of the largest economies this century. The mining industry is of particular note, as Pakistan boasts deposits of gas, oil, coal, chrome ore, marble, salt, limestone, uranium, phosphate rock, barite, sulphur, and precious and semi-precious stones. The subsoil is very rich but not yet fully investigated, for which the experience of Belarusian experts may be useful.


Andrey Kovtukho, the Director of the Geological Research and Production Centre:

“Belarusian specialists have rich experience in the exploration of oil fields, solid minerals, salts, and underground water: fields in which our Pakistani colleagues are interested. We’re enjoying an exchange of information, presenting the capabilities of Belarusian geologists, while Pakistan shows us its resource riches. Of course, we need to seriously study the geological structure of Pakistan, to identify opportunities and prospects for co-operation. There is some interest from Pakistani companies, including in relation to exploring hydrocarbon, oil and gas.”

The problem of finding underground water is also relevant. We have agreed to sign a framework agreement on co-operation in the field of mineral exploration. Possibilities and conditions have been discussed, including the sharing of expertise and training of higher-level personnel.