Motiejus Sinkevičius was one of the first to install a private turbine, which powers his workshops and lights his courtyard

Motiejus Sinkevičius, from the village of Novye Podduby in the Shchuchin District, was one of the first to install a private turbine, which powers his workshops and lights his courtyard.

If harvested efficiently, wind energy could fully satisfy the world’s energy demands. The number of wind-powered land turbines has tripled over the past five years globally, with wind-farms a common sight across Europe and Belarus now following suit. Our republic has gained its first such major installation in Novogrudok (more effective than any other in Europe) and private farmsteads are purchasing individual turbines. Motiejus Sinkevičius, from the village of Novye Podduby in the Shchuchin District, was one of the first to install a private turbine, which powers his workshops and lights his courtyard. 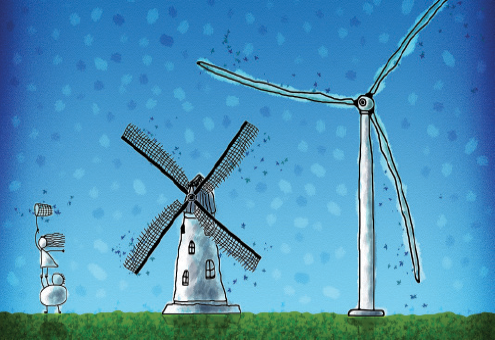 Energy in a courtyard


Motiejus Sinkevičius, his wife Yanina and their two little children moved to Belarus from Lithuania in the early 1990s. He gained respect from his new neighbours immediately, demonstrating himself to be a hard worker. His passion is to work with stone, by hand, and he even made his own machinery for this purpose. Today, he has fifteen similar machines and a mini-fleet of self-made tractors and cars. For a long time, he cherished the idea of placing wind turbines in Shchuchin. He tells us, “As a child, I remember watching a windmill turning powerful millstones, several tonnes in weight, which ground flour for the district. Wind turbines are quite common in Lithuania, where I was born and grew up, so I wanted to make something similar for our own courtyard. I started sketching and, to tell the truth, it was my grandson who gave me the idea of going online, searching for ‘hand-made wind turbines’.” 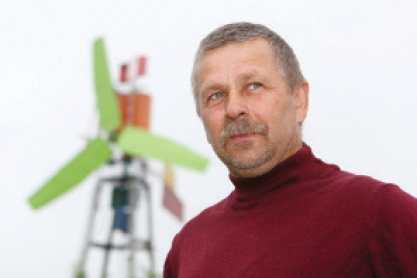 Motiejus Sinkevičius and his self-made wind-turbine


The Grodno Region is a national pioneer in the use of wind energy in Belarus. Three years ago, HEAG launched our first wind-electric installation, with a capacity of 1.5 megawatts, located at one of the highest points in Novogrudok, near the village of Grabniki: 323m above sea level. The wind turbine is 82m, with each blade having an 82m wingspan, weighing around 200 tonnes, mounted on an octahedron shaped pole 14m in diameter, weighing a thousand tonnes and made from ferro-concrete. Unsurprisingly, a special crane was needed to raise the turbines into place, with a boom outreach of more than 90m. An automatic control system allows the turbines to work independently, and birds and other living creatures are kept away.

Potential not yet exhausted


The wind-energy potential of Belarus is estimated at 1,600 megawatts. About 1,840 platforms are suitable for wind-turbines, rivalling Poland and other countries in Eastern Europe, where wind energy has been in use for some time. Germany and Spain are particular leaders in this sphere.

Naturally, the branch requires huge investment in order to become a true alternative to traditional energy resources, so Belarus is eager to attract investors. A corresponding law ‘On renewable energy sources’ is helping build a system of state regulation and support for all forms of renewable power — and wind-energy in particular. Investors are being offered a number of privileged terms, to encourage their interest.

28 wind-driven power plants are currently operating, boasting a total capacity of around 9MW. Last year alone, 7 wind turbines were put into exploitation. At present, several large organisations-investors in the Republic are involved in preparatory work, including the measurement of wind potential for further decision making regarding the construction of wind parks in the Vitebsk, Grodno, Minsk and Mogilev regions.

In particular, one more wind park has been already laid down in the Grodno Region, which will be located in the Smorgon District. First two wind-driven power plants, being around 58m high and boasting the capacity of around 600kWh each, are situated close to the village of Krevo. Belarusian Aero Stream JSC has implemented the project dealing with the construction of wind mills. These already generate energy that is supplied to common electrical power system of the district. According to the signed treaty, a private investor sells the wind-generated energy to Grodnoenergo Republican Unitary Enterprise. Twenty five land lots have been determined in the Smorgon District and agreed with corresponding departments where installation of wind turbines is possible. These are to be built in the Dyatlovo District.

Private installation of wind turbines is permitted as long as the noise does not disturb neighbours or break the law in any other fashion. They can be purchased online and one Belarusian enterprise is offering their own design for sale for just $2,000: able to produce 1 kilowatt. Mr. Sinkevičius paid next to nothing for his turbine, having assembled it himself, and is planning to raise its output to 18 kilowatts, so that it may heat his home.