The first official visit to our country by the Prime Minister of the Islamic Republic of Pakistan, Muhammad Nawaz Sharif, can be called logical continuation of the May meetings at the top level in Islamabad

The first official visit to our country by the Prime Minister of the Islamic Republic of Pakistan, Muhammad Nawaz Sharif, can be called logical continuation of the May meetings at the top level in Islamabad 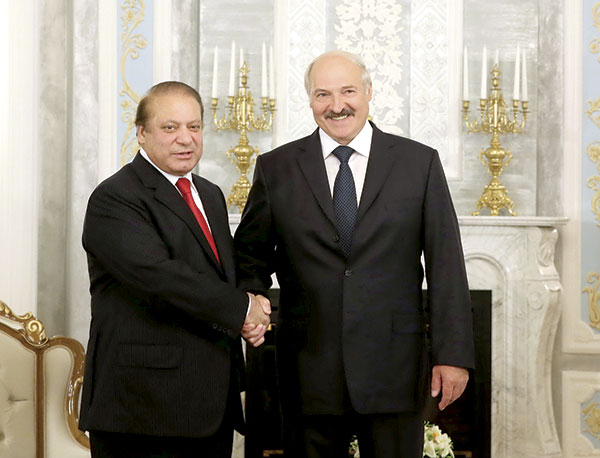 At that time, Alexander Lukashenko visited Pakistan — first in the history of the bilateral relations. In general, it’s a rather rare case in world practice when the two sides exchange visits within just two and a half months. This fact vividly demonstrates mutual desire and aspiration of both states to move from intentions and declarations to fully-fledged co-operation.

The more often politicians meet, the higher the level of trust is and the stronger the friendship is, which is a factor of successful development of economic interrelations. Last November, the Belarusian Embassy began its work in Pakistan while this year the Pakistani Embassy will open in our country. The interests are quite definite. Pakistan, with a population of almost 200m people [the whole Eurasian Union] is the world’s fourth grain manufacturer and the planet’s fifth milk producer — a huge and rather promising market for our manufacturers.

Probably, few are aware that the word ‘Belarus’ is strongly associated in Pakistan with tractors and only then with the country — a wonderful example of efficiency of economic diplomacy. Moreover, this year, MTZ plans to increase by one third the sales of its tractors to Pakistan: from 3,000 to 4,000 pieces. However, Mr. Lukashenko offers not to be limited to pure trade but to expand the potential of production co-operation, i.e. to shift towards the establishment of assembly productions of agricultural machinery in Pakistan. Mr. Lukashenko and Mr. Sharif have agreed to develop a ‘roadmap’ of the development of the Belarusian-Pakistani relations in the nearest future.

The negotiations in Minsk have also proven joint readiness to expand collaboration in the sphere of struggling against terrorism, extremism and transborder organised crime. The President noted that there’re six densely populated countries in the world, including Pakistan. Mr. Lukashenko believes that the climate on our planet will depend on the situation in these states.

After the negotiation,s 15 documents have been signed, with the Agreement on Friendship and Cooperation being a key one, outlining major principles of political and economic dialogue between the two states.
Заметили ошибку? Пожалуйста, выделите её и нажмите Ctrl+Enter