If you want a holiday, go to the Bolshoi… Regardless of the time of year, the opera revives your spirits. In bad weather, you feel warmth, and in hot, only coolness. If you feel tired after a working day, the beauty of the performance will awaken you. Even when your mood is quite low, you will leave cheered. Much lies in the anticipation, which only heightens once the conductor`s baton begins to offer its blessing over the orchestra, beginning its musical marathon with the overture. 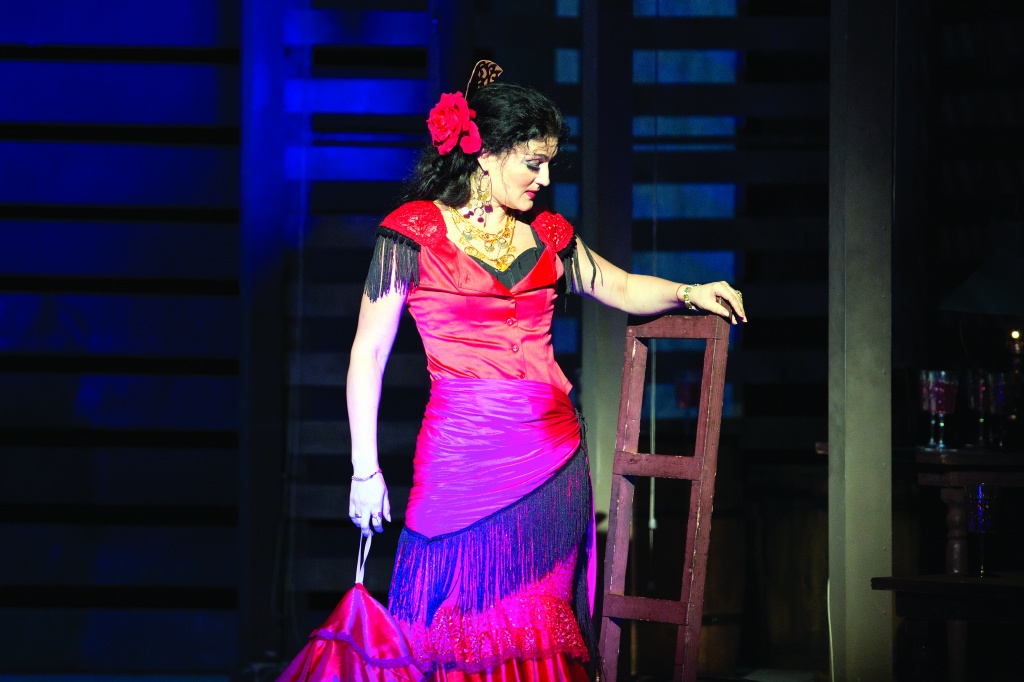 The foyer and hall are lit by elegant candelabrum and chandeliers of the highest quality, with upright doormen and security guards welcome you at the entrance. It’s hard not to smile, since they are there to ensure everyone’s safety. It’s a great feeling.

Audiences tend to make an effort with their outfits, although not all ladies wear evening dress. Some don jeans and T-shirts or tunics with bright prints, following this season’s trend for informality. It’s an eclectic scene. My neighbour, who is a student, tells me that the Vienna State Opera does not enforce a dress code, since many arrive straight from work. However, she likes to wear a magnificent dress, believing it more suitable.

If I go to the opera after work, I tend to take a light scarf, to liven up my appearance, and ensure I place my favourite perfume (‘Alien’ by Thierry Mugler) into my handbag in the morning. A few spritzes of scent work wonders! Sitting in the audience, you smell a bewitching blend of fragrances: from oriental-arboreal aromas, with top notes of jasmine, to musky scents and floral meadows. It’s like a ‘symphony’ for the nose.

Some audience members have been attending the theatre since it first opened, in 1933, when legendary People’s Artiste of the USSR Larisa Aleksandrovskaya sang the role of Carmen. Grand dames like to recall past performances, discussing the merits of various singers in various roles, as they sip their tea with friends.

Five performers have sung the role recently. Oksana Volkova, an Honoured Artiste of Belarus, now sings at La Scala. Those who follow such things know each artiste’s biography and performance history in detail. In autumn, when Oksana returns to Minsk, her fans will gather to see her, and I’ll be among them! It’s impossible not to admire her tremendous mezzo-soprano: she has so much depth of tone and is known for her charm. Her portrayal of opera heroines is second to none, especially when the roles are passionate and strong, as for Carmen.

People say that the role becomes a calling card. I can hardly wait for autumn to arrive. I’m looking forward to seeing Oksana Yakushevich play Carmen, as she’s so brimming with energy. I heard her in Grey Legend, as Lyubka, and Aida, playing Amneris. I once read that professionals compare her to Jessye Norman. It will be interesting to see how she copes with the most complicated role of Carmen, as musicologists assert it to be.

Attending the opera is almost like taking the sacrament, so beautiful are the voices. It doesn’t matter who stages Carmen, or how, I love it each time. It awakens the best in me. I’ve been browsing the June issue of Parterre magazine, which is devoted to the second Ballet Summer at the Bolshoi and to the sixth festival of opera and ballet art, entitled Evenings of the Bolshoi Theatre at Radziwill Castle.

My colleague, Tatiana Teodorovich, likes to quote Nietzsche, who was an enthusiastic fan of Carmen. He said: ‘When I listen to Bizet, I become a better person, a better musician and a better listener. This work releases me’.

I feel just the same! No other art form gives me such sensations, making me feel alive, clever and loving. It makes me feel that life loves me. I experience tremendous emotions at the opera. As soon as I sit down, either on a soft chair in the stalls or on a folding press chair, I feel that my life is purposeful, and an air of tranquillity descends. I feel at one with all in the hall around me. 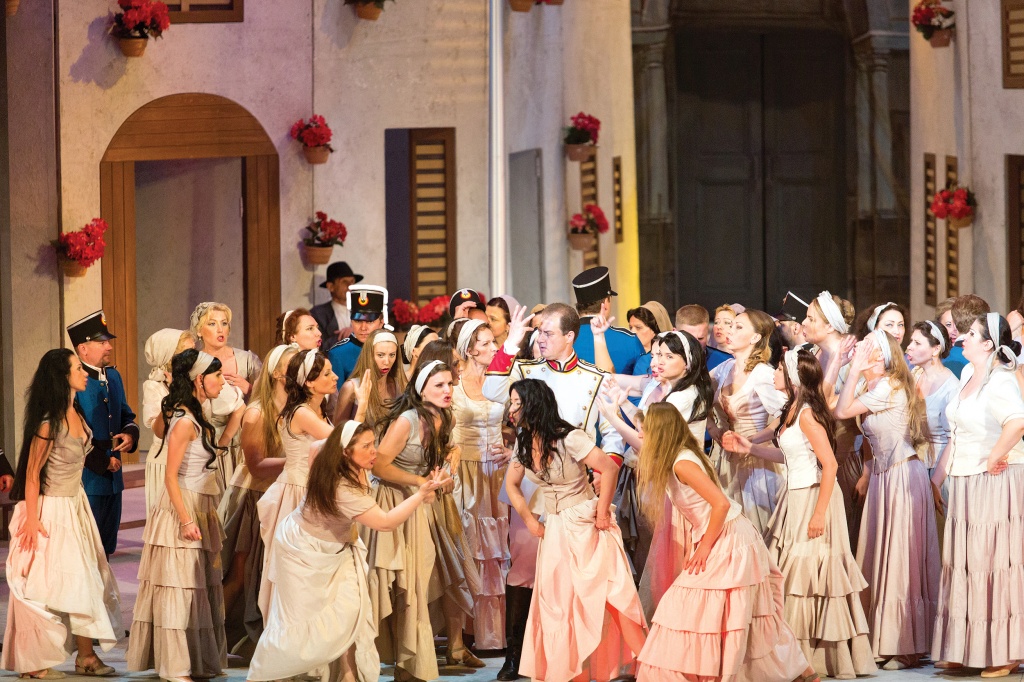 Scene from the performance

One of the most popular musical dramas in the world is Carmen, created by Henri Meilhac and Ludovic Halévy, and based on the short story by Prosper Mérimée; it is an eternal opera masterpiece. As Andrey Galanov, the conductor-director tells us, some pieces continue to charm us through each new generation, regardless of performers or directors. Something unusual and mystic occurs.

For those who have forgotten the plot, I will remind you that Carmen is a beautiful Gipsy working at a cigarette factory. She is arrested for fighting at work, and placed under the guard of Sergeant José. Having fascinated him, she persuades him to release her. Such is her power that successful José, who has a modest and loving fiancée, and a lonely mother, is changed forever. In freeing her, he loses his employment, being obliged to take work as a simple soldier. However, in the heat of a quarrel, he raises his hand against his chief. To avoid prison, he joins the smugglers with whom Carmen has been keeping company. Driven to such ends, the last straw is his witnessing of Carmen’s flirtation with handsome toreador Escamillo, who promises to honour her with his kill. José begs Carmen to return to him, but she refuses to be ‘owned’ and dismisses him, leading to him jealously murdering her, so that nobody may be with her if not him.

Carmen celebrates its 140th anniversary this year and, no doubt, has changed the face of European and world musical culture. It has been staged seven times at the Bolshoi alone, with producer Galina Galkovskaya this year devoting the performance to all the great masters of the Bolshoi Theatre of Belarus: its soloists, conductors, directors, choirmasters, ballet masters, concertmaster, artistes and musicians. Their joint effort is responsible for this wonderful theatre.

I can’t help but agree with Galina’s sentiment. Carmen is always received with delight, ovations, and shouts of ‘bravo’. Every actor currently in the lead role is wonderful, from Frantsisk Skorina medal holding Eduard Martynyuk (José) and Tatiana Gavrilova (Micaëla), to Honoured Artiste of Belarus Stanislav Trifonov (Escamillo), conducted by Ivan Kostyakhin.

I am no expert but I can’t help feeling some fragmentation in the current staging, and pauses without music, especially near the beginning. However, after the fortune-telling scene, when José begins to fall more deeply in love with Carmen, the performance gains more power and richness. We feel the tragic thread pulling the characters towards their destiny.

Ms. Galkovskaya admits that she finds Carmen`s tragic love story fascinating. She tells us that Bizet’s character is doomed, in failing to understand the true power of love. She has only affection for José, contrasting with real passion for the toreador. Her own actions lead to her death. 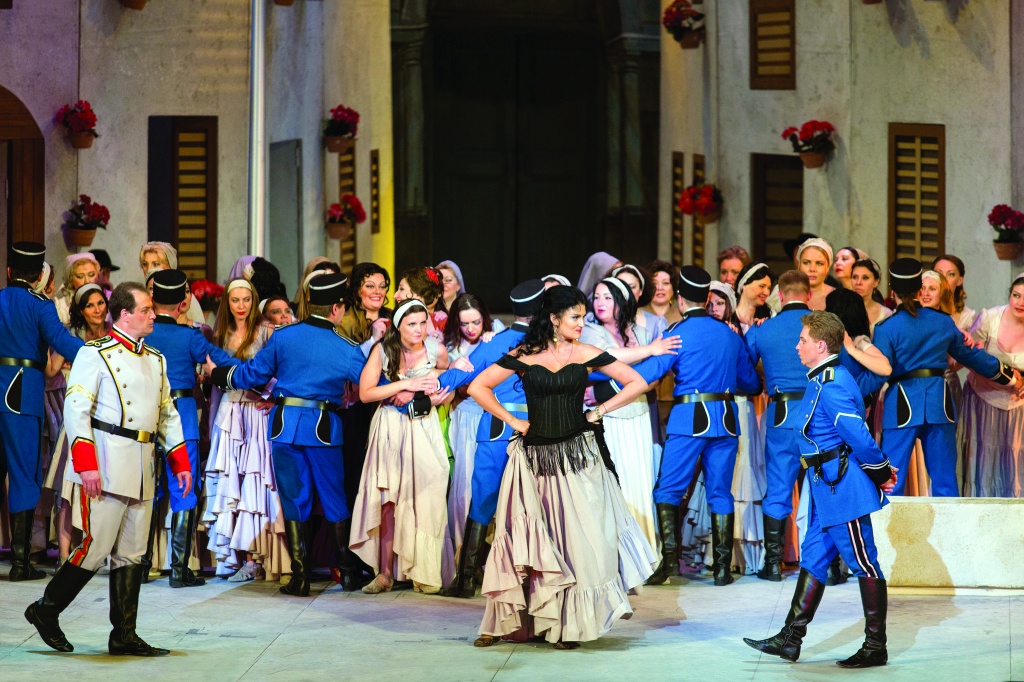 Crowd scenes in Carmen opera are little performances in the canvas of the stage action. In the foreground Oksana Yakushevich is in the centre, Eduard Martynyuk (José — on the right), Dmitry Kapilov (Tsuniga — on the left)

Of course, we all find Carmen attractive, being beautiful, independent and proud. I’ve watched several screen versions, and read the short story by Prosper Mérimée as a student. At that time, I saw that Carmen wanted to avoid the commonplace. She needs not simply a rich husband or lover, but a real hero. José, played by Martynyuk, is lacking: unable to unlock the potential of her heart. Carmen is confused to some extent, being unable to articulate her needs, as so wonderfully portrayed by Oksana Yakushevich. Perhaps, this could be emphasised for the audience more clearly.

Martynyuk is a talented actor, able to transform for a role. As the Duke in Rigoletto, he was a hero-seducer; here, he is a simple person, whose internal beauty and resoluteness is revealed through his falling in love. Nevertheless, he is not the hero Carmen desires.

Some women seek out powerful, brave and handsome men, having a subconscious thirst for healthy and strong offspring. Seeing Carmen’s struggle, we feel compassion and cannot condemn her choice. I admit that I’ve experienced a similar situation of having to turn down a marriage proposal. I’m not the first or last such woman to experience this. The theme of love and death is one able to stir a chord within us.

Who would ever grow tired of listening to Bizet’s sensual Spanish music? He never visited Spain, yet captured such beautiful melodies. He portrays love as a little bird with wings, to strains familiar around the globe. His March of the Toreadors is just as famous. On the opening night, this recognisable melody, with its rhythms of flamenco and sevillanas, seemed as fresh as if it had only been written. Time passed in the blink of an eye, with each audience member entranced. It seemed even as if I was on stage, taking part, so drawn in was I, as Carmen played with a flower…

The Bolshoi chorus, headed by choirmaster-producer Nina Lomanovich, is also worthy of great praise. Long gone are the days when the chorus were perceived as mere extras, who were placed as if rooted to the ground. In Carmen, as in other stagings at the Bolshoi, each has their own character, helping create the illusion of individual destinies, with their movements justified and directed.

The sets and costumes for Carmen have been created by Finnish costumier Anna Kontek, featuring a great number of frilled ‘bata de faralies’ dresses. Each is luxurious, with every costume different to those around it.

Has the Bolshoi Theatre managed to bring the bright Spanish style of Seville to the stage, with its pleasures, fatal passions, great emotions and realistic human relations? Has the cast and crew brought Bizet`s work to life, so that we feel blood pulsing through the veins of the performers? Does the opera feel relevant to our modern world?

In my opinion the answer is unequivocal: yes!