Belarus was welcoming a top guest for three days

Belarus was welcoming a top guest for three days. On arriving to Minsk, Patriarch Kirill of Moscow and All Russia admitted that he always comes to our country with warm feelings. However, his recent visit was truly special. 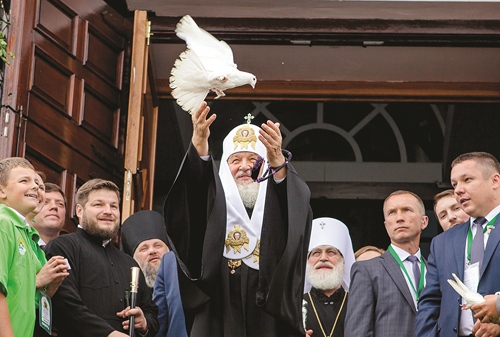 “My visit is timed to the 1000th anniversary of the Repose of the Holy Equal-To-The-Apostles Prince Vladimir who baptised Rus and laid the foundations of the Christian civilisation for Eastern Slavs, connecting fraternal nations with the Christian faith. With this in mind, visiting Belarus — which is a precious stone in this wonderful crown of Eastern Orthodox nations — is extremely important for me and I’m personally very happy,” the Patriarch said.

Despite a day-off, the Belarusian President welcomed his distinguished guest, demonstrating him the halls of the Palace of Independence. During their hearty talk by a fireplace, Mr. Lukashenko sincerely told the Patriarch that no problems in believers’ interrelations are observed in our country, “We highly appreciate this and would cherish this as much as we can. We do our best to ensure people feel comfortable and anyone is able to find his own path to the church.”

The Head of State stressed that Belarus` peace-making mission in the regulation of the situation in Ukraine is well known. “Fraternal peoples of Russia, Belarus and Ukraine have the same roots. It hurts when our brothers are in trouble. We will do everything to de-escalate the situation and, if possible, to stop this fratricidal war,” Mr. Lukashenko said.

In turn, Patriarch Kirill of Moscow and All Russia named the events occurring in the fraternal country ‘a major sorrow’. “This is truly a wound on our heart. At present, our church is a single organisation in Ukraine and a single force which has preserved its peace keeping potential — since it failed equal itself to any side,” he said, adding, “It’s impossible to divide congregation under a political principle.”

A kind hearted exchange of presents contributed to the warmth of the meeting. Patriarch Kirill of Moscow and All Russia presented the Order of St. Seraphim of Sarov 1st Class (in different times, presented to famous state, public and religious figures) and the Icon of Equal of the Apostles Great Prince Vladimir to the Belarusian President. In turn, Mr. Lukashenko presented the Icon of Guardian Angel — made by Gomel’s masters — to the Patriarch.

After meeting with the President and laying wreaths to the Victory Monument, Patriarch Kirill met congregation at the Holy Spirit Cathedral. When the solemn divine liturgy and sermon (broadcast on a large outdoor screen) ended, Patriarch Kirill and Metropolitan of Minsk and Zaslavl, Pavel, solemnly cancelled a stamp honouring the 1000th anniversary of the Repose of the Holy Equal-To-The-Apostles Prince Vladimir who baptised Rus, also taking part in the opening of a new Spiritual-Educational Centre of the Belarusian Orthodox Church and consecration of the Finding of the Mother of God’s Icon sculptural composition. This icon disappeared in Kiev in August 1500 but later miraculously rose to the Svisloch’s surface, near the ancient Minsk citadel. Since then, it’s known as Minskaya and has never left the city — being kept at the Holy Spirit Cathedral.

Patriarch of Moscow and All Russia Kirill continued his visit in Brest where he held a Sunday divine liturgy at the Host Resurrection Cathedral — attracting several thousand people, including heads of the region and city and the clergy. On June 22nd night, the Head of the Russian Orthodox Church visited the Brest Fortress, reading a mass of the resurrection at the Nikolaevsky Garrison Church to honour the memory of the killed warriors. Later, he took part in the meeting-requiem. The Patriarch presented the Consolation of All Sorrows icon — with the Mother of God’s face depicted — in memory of his staying in Brest.