In the footsteps of valuable rarities

Rare historical artefacts, connected to Slutsk and Mogilev, kept in Warsaw and Augsburg

Rare historical artefacts, connected to Slutsk and Mogilev, kept in Warsaw and Augsburg

Many artistic and cultural treasures related to our country can be found beyond Belarus, with some unknown ones until recently. However, researchers studying these artefacts now have much to share with us, including Ewa Orlinska-Mianowska, who has a collection of fabrics at the National Museum of Poland. She tells us of these Slutsk sashes, while a collector from Augsburg, Oleg David Lisovsky, focuses on rare photos kept in Germany, which are for sale to anyone interested. 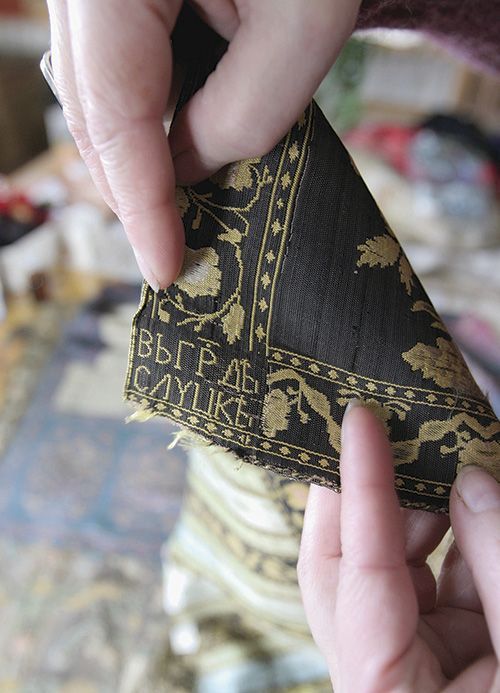 The largest collection of the18th century Slutsk sashes (woven at the Radziwills’ Slutsk workshop) is to be found in the National Museum in Warsaw. However, Minsk’s National Art Museum is showcasing six at the moment. Overall, the Polish collection comprizes 59 sashes which are thought to have been made in Slutsk, with another 226 imitating Slutsk designs and patterns but originating from other Belarusian and Polish regions.

The Slutsk sash is a national Belarusian symbol, as our children learn at school. Maxim Bogdanovich’s Slutsk Weavers poem tells us:

A pine wood skirt is growing darker…
While hands are weaving in oblivion
The native land’s flower
Instead of Persian ornaments.

Poland views these sashes as a part of its national heritage, shared with Belarus; of course, the artefacts were produced during the time of the Rzecz Pospolita common state for the 18th century Belarusians and Poles. Ewa Orlinska-Mianowska keeps a collection of fabrics at the National Museum in Poland and is a true expert on the famous sashes. She tells us eagerly, “Interestingly, Slutsk sashes and similar copies had no unique name in Poland, Belarus or in other Rzecz Pospolita regions. Only now they are called ‘kuntush’ (as they belted men’s kuntush and zhupan clothing). Sashes were produced not only in Slutsk and actually originated in India, Turkey and Persia (Iran). Belarusian poets mention ‘Persian ornaments’ and sash production was popular even in Italian Venice and French Lyon. Grodno’s manufactures focused on Western European ornamentation.”

Where do you find your numerous exhibits?

My collection started with sashes presented by Leopold Meyeton (upon which the National Museum was later established). Many were lost during WWII: only 28 remained out of 124. After the war, the museum obtained sashes from the Potockis’ collection: earlier kept at Krzeszowice Palace, near Krakow. Sashes were worn exclusively by noblemen; being made from expensive silk and golden threads, few could afford them. As a result, museum collections keep different sashes: some truly luxurious and others more modest. The National Museum owns many wedding sashes, woven for solemn ceremonies. 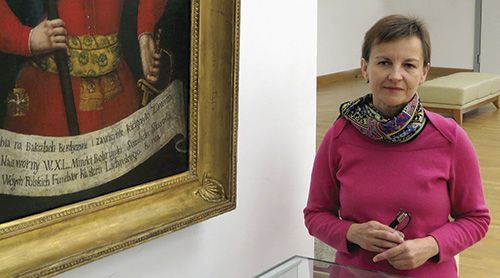 
Other 18th century Belarusian and Polish workshops became known for ‘persiarnya’ Slutsk sash manufacture, as Ms. Orlinska-Mianowska explains, “Persiarnya sashes remained popular longer than others, so that the ‘Slutsk’ name became synonymous with kuntush sashes produced in other areas. Some exhibits at the Polish museum date from 1807! Slutsk’s manufacture of sashes began around 1767, initiated by Jan Madjarski, at the behest of Karol Stanislaw Radziwill Panie Kochanku. Interestingly, Madjarski is mentioned in earlier documents as ‘a master of a Nesvizh-based Persian factory’. In 1776, he rented the workshop and, from 1780-1807, his son Lean took over the business. Falling popularity led to the factory falling into ruin by 1812, and it had completely been closed by 1842. From employing 24 local weavers in 1792, the number had fallen to 12 by 1795 (30 people in all). In the first decade of his management, Madjarski’s workshop produced 758 sashes. Most 4m belts took five days to weave and each bore 11 trademarks, including: Sluck; Me Fecie Sluciae; Johannes Madzarski (in the time of Jan Madjarski); Leo Madzarski; and In Slutsk City (in the time of Leo Madjarski). The two last sashes, produced in 1846, bore the name of Stefania Radziwill’s husband — ‘Ludwig Wittigenstein’.”

Warsaw’s Slutsk-made sashes have already been exhibited in Lyon and Venice and six are now on show at Minsk’s National Art Museum.

Collector with a hunter’s instinct 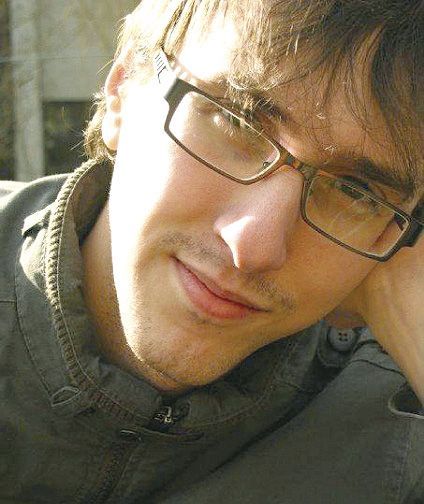 Interestingly, the collector lives not in Mogilev, which is his native city, but German Augsburg, having moved there for employment a few years ago. However, his soul remains in his homeland. The enthusiast has a rich mini-archive of Mogilev history in his German flat. Mr. Lisovsky explains, “I began collecting digital copies of the city’s old photos when I lived in Mogilev and, on coming to Germany, continued collecting, as well as uploading them to my site. This is how my work on Mogilev’s photo history commenced.”

Recently, the researcher has begun collecting written sources on the history of his native city and Belarus, discovering rare Western European books and newspapers via Internet-auctions. Some are unknown to Belarusian researchers, despite containing much valuable information. They would cost hundreds of Euros at Minsk’s second-hand bookshops but are sold for just 1-10 Euros in Germany; of course, truly rare editions cost up to several hundred or even thousands of Euros. 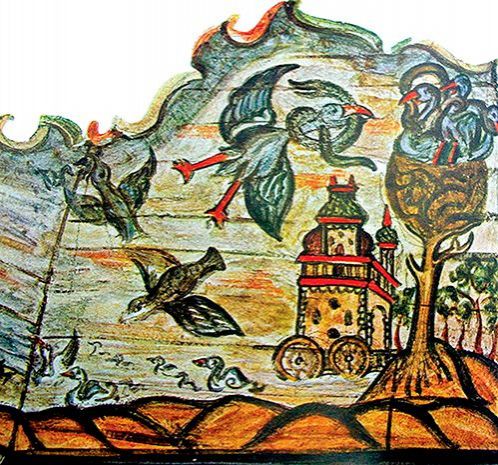 Mogilev. Storks in the interior of the cold “school” synagogue decorated by Chaim Segal


Mr. Lisovsky has already assisted Mogilev’s History Museum in buying several exhibits — among them engravings and the 16th century maps. However, the collector’s major aim is to study the history of his homeland. Reading German language books helps greatly, as he explains, “Belarus is often mentioned in the 16th-20th century German editions. Sadly, I lack time to read them all, so primarily focus on Mogilev. Many editions deal with wars from the past. I have 1812 newspapers devoted to the Napoleonic war in my collection, in addition to two pages of an early 20th century American newspaper which describes Russian Tsar Nikolay II’s stay in Mogilev.”

Mr. Lisovsky adds that a copy of Deutsche Blätter newspaper (dated August 23rd, 1814) is among his major treasures, containing a long article on Belarus-born Tadeusz Kosciuszko, who led the 1794 rebellion in the Rzecz Pospolita. The text reads: ‘Kosciuszko is among the greatest men of our modern times. Being a talented military commander, he is brave, loves his homeland, is extremely fair-minded and truly generous. Such features place him above his contemporaries in the eyes of his heirs’. The newspaper also describes some facts from Kosciuszko’s life, saying: ‘His fate has been guided by an unhappy love affair. His affection for a daughter of Lithuania’s Grand Marshall Sosnowski pushed him to leave Poland. Studies of history and mathematics and his bright intellect have prepared Kosciuszko for the school of war, freedom and life wisdom’.

Not long ago, Mr. Lisovsky completed his translation of a 1785 German book into Belarusian: Wonderful Facts on Belarusian Jesuits. It is now being prepared for printing at Mogilev’s History Museum. He is hugely proud of the edition, saying, “I discovered this book on the life of Mogilev Jesuits at auction. At that time, the Jesuit Order was prohibited in Western Europe but the Society of Jesus acted in Russia (Mogilev included). The book tells of how Jesuits managed to gain a foothold in Belarus, which was a challenge. A diplomatic war broke out between the Pope and Russian Empress Yekaterina II, over those ‘Belarusian’ Jesuits. Mogilev’s Archbishop Sestrentsevich managed to reconcile Rome and St. Petersburg, achieving the recognition of ‘Belarusian’ Jesuits and the further revival of the order all over the world. As a result, Mogilev became a centre of the global policy.”

Mr. Lisovsky notes that, for the first time in German literature, Belarus appears as an independent country, despite the fact that, at those times, no such state existed on the global map: Belarus was named Weissrussen in German and Russia was called Russland. Clearly, our country was already well-known and interesting to Europeans.

Mr. Lisovsky is a true hunter of historical facts, being unsatisfied with others’ work. He is eager to learn Belarusian history from original sources, including using online information. 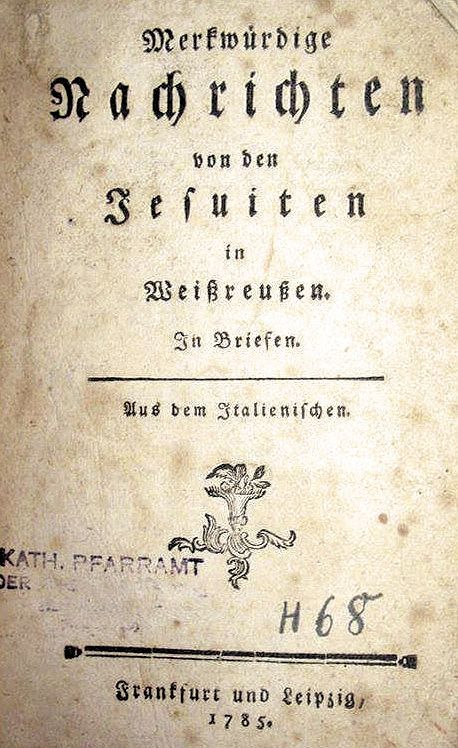 “Wonderful Facts on Belarusian Jesuits” book, issued in Frankfurt and Leipzig in 1785

Around 1916, legends were spread about Mogilev’s synagogue. After coming to the city, we discovered it in just a couple of hours. The synagogue is situated near the Dnieper River and is completely hidden, which is strange: synagogues are usually located to dominate their surroundings.

The synagogue has its doors closed during the day. Its walls are made of white oak and produce a boom when being knocked upon. Its ceiling resembles a tabernacle and is divided into several sections. Only a few simple colours are used but they create a whole world, which fills the small room with light. Everything is painted inside the synagogue,  including the benches and the dome. It is an indication of sublime culture.

Segal created all this beauty. On finishing everything, it’s said that he fell from the scaffolding and died. We cannot know for sure whether this really happened but the story perfectly characterizes his mastery: his work is so wonderful that Segal’s further life would have merely detracted from his greatness. His work was complete, so his soul had nothing more that it needed to achieve within his body…

The ceiling is the focus of the synagogue. Over the entrance (from the western side), huge lions and peacocks are decorated. The lions hold two banners with inscriptions; the lower is devoted to the master’s memory. In addition, a frieze is painted on three northern and three southern panels of the dome, showing predators and prey. Water is painted beneath, with land above and the sky higher, while stars scatter the sky, and flowers bloom. Fish are in the water, with birds catching them. On the land, a fox carries a bird in its mouth, while a bear climbs a tree for honey. Birds keep snakes in their beaks. All — with their wings and legs — represent people. These four-pawed creatures and birds have human eyes, as is common in Jewish artistry.