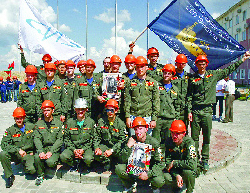 This year, construction of the nuclear power station and objects of its infrastructure in Ostrovets, received the status of All-Belarusian Youth Construction Site. For almost two months, the Single consolidated student Belarusian-Russian group, named after the Hero of the Soviet Union, Ivan Lebedev has worked here.

The student group did not get this name by accident. Ivan Danilovich Lebedev has been credited as its honorable fighter. A native of Russia and a participant of the Victory Day Parade in June 1945 on Red Square, he has served after war in Grodno and here, the former front-line soldier lives to this day.

210 fighters from Minsk and all regions of Belarus, as well as from two regions of Russia have been within the student labor landing troops. The Russian guys have been presented by the ‘Power Engineer’ student construction brigade of Obninsk Institute of Atomic Energetics and the ‘Current Strength’ brigade of Nizhny Novgorod Alexeev State Technical University. There have been 47 people in all.

“All people have worked with full dedication and conducted various works — enforcement of concrete constructions, making hardware items, concreting, stonework etc. We have attentively got the measure of everybody to invite some of them to the Power Plant as future specialists,” says Mikhail Filimonov, the Director General of RUE Belarusian Nuclear Power Plant.

The guys don’t hide the fact that they have come to the construction not only for romanticism. For students, it’s important to be financially independent of parents and to earn their own money. Mikhail Yanshin, a student of Obninsk Institute, has told that he has come here already for the second summer in a row. “We have worked 10 hours a day. Sunday is a holiday. According to the concluded contract, we have hourly pay. For overtime — it is double time,” Mikhail told.

Nearby, their Belarusian counterparts have worked too. They, like the guys from Russia, are ready to come here next year. “They have created perfect conditions for us,” the commander of the consolidated group, a fourth-year student of the Engineering and Construction Faculty of Grodno State University (named after Yanka Kupala), Andrey Skolota says. “All the members of the student group have been accommodated in the new multiple family dwellings. At the cost of the receiving organisations we have been provided with refrigerators, the necessary furniture, crockery, and medicine chests.”

Special buses have brought members of the consolidated group to work and back. The nutrition of the fighters has been organised in a canteen on the territory of the future power station. A half of its cost has been recompensed by subcontracting organisations.

Russian students, who have come to the Belarusian construction, get in their native land, core specialties, connected with atomic energetics. Working at the nuclear power station in Ostrovets is, for them, a peculiar practical training. Certainly, not all today’s members of the student group will come back here to work after the completion of the course, but they will have an immediate conception about their future profession.

Mikhail Kiselev, Commander of the Central Headquarters of the Russian Student Groups youth public association, thinks that this factor is of no small importance. “Our guys have received the necessary experience and have seen how the branch develops. It’s also important that young people see how projects of the Union State are realised in real life.”

The joint student construction brigade movement gains momentum. If, in the last year in Belarus only one Russian student construction brigade of 20 people had worked, this year there have been several. This year, Russian students have worked at the construction of the Minsk Underground, the Student Village, and other venues in the capital of Belarus. It has become possible thanks to the joint agreement between Belarusian Republican Youth Union and Russian Student Groups public associations.