The President’s official visit to Georgia began with a significant and symbolic event: the laying of a wreath on the Tomb of the Unknown Soldier in Tbilisi’s Vake Park

Friendly impulses from centre of Europe

The memorial is dedicated to the memory of all those soldiers who died during the Great Patriotic War. Our two countries are united by their history but, in our modern times, are discovering each other anew — as evinced by the agenda of the Belarusian-Georgian business forum hosted by Tbilisi on the eve of the President’s visit. 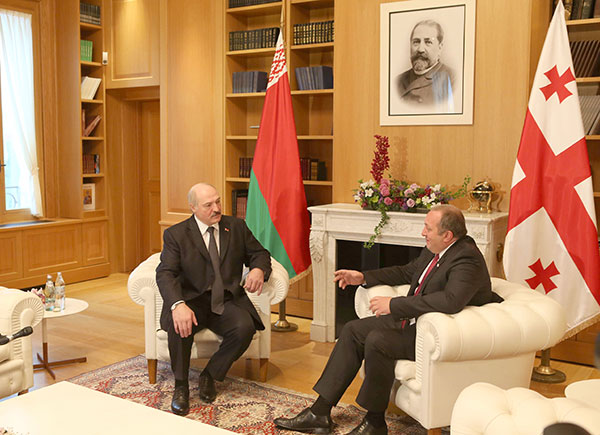 Presidents Alexander Lukashenko and Giorgi Margvelashvili during the meeting in Tbilisi

The forum brought about the conclusion of $4m in contracts — signed by Minsk Automobile Works and Minsk Tractor Works (in addition to direct agreements signed by some other enterprises). Importantly, the Belarusian Chamber of Commerce and Industry organised for 42 Belarusian companies to attend the Georgia event, helping arrange meetings with over 200 local businessmen.

Although no firm details are available, due to commercial discretion, it appears that turnover between our countries may double or triple, notes Belarus’ Deputy Prime Minister, Mikhail Rusy. He attended the forum, meeting with the heads of the Georgian and Belarusian chambers of commerce and industry: Kakha Baindurashvili and Mikhail Myatlikov.

Clearly, our two states enjoy significant potential and the possibilities of the Eurasian and European economic unions found much discussion at the forum. Being an associated EU member, Georgia enjoys its own advantages in this respect and Belarus has its own, as a central partner within the Eurasian Economic Union. Mr. Myatlikov shared his thoughts, saying, “Our two states’ businesses are interested in the possibilities offered by the Eurasian Economic Union and the EU. Belarus and Georgia can take advantage of these unions in bilateral terms.” Of course, economic and business co-operation are supported by top-level political dialogue, resulting in Mr. Lukashenko making time for talks with his Georgian colleague, Giorgi Margvelashvili, and with Prime Minister Irakli Garibashvili.

The Belarusian President also met the Catholicos-Patriarch of All Georgia and Tbilisi, the Archbishop of Mtskheta-Tbilisi and Metropolitan Bishop of Abkhazia and Bichvinta, Ilia II. Several major documents were signed, to develop co-operation across such spheres as tourism, health protection, education, science and engineering. Our two states have opened a new page in substantial political dialogue and mutually beneficial economic interaction.

From the very first minutes of the meeting between the heads of state, it was clear that Tbilisi (translated as ‘warm place’) lived up to its name. Despite the drizzle, the atmosphere of talks was definitely sunny. Our states have enjoyed diplomatic relations for over two decades but, until recently, no top-level contacts existed. However, this does not mean that inter-state dialogue has been lacking. Mr. Lukashenko thanked the Georgian President for his support within the international arena, which Tbilisi always renders to Minsk. Mutual understanding in the political sphere opens the way for development of strong trade-economic collaboration. Our states are both keen to develop such work, as the presidents assured one another.

Talks tackled a wide range of topics and, speaking to journalists afterwards, Mr. Lukashenko noted that Belarus views Georgia as a potentially promising trade-economic partner in the Transcaucasia area. The President shared his impressions on the business forum’s results, underlining his hope to see turnover reaching up to $200m. Since today’s figure stands at just $65,000, progress will need to be significant. Naturally, there is more to collaboration than trade; joint manufacturing ventures can be extremely profitable if they reflect demand on the vast markets of the European and Eurasian economic unions.

The presidents paid special attention to their integration vectors: Georgia within the EU, and Belarus within the Eurasian Economic Union. Without doubt, inter-state interaction is not only possible between our two nations but is highly desirable, opening the door to each other’s markets. In this respect, the essence of Minsk’s initiative ‘integration of integrations’ is clear and Mr. Lukashenko is convinced that, in due time, we’ll enjoy serious interaction with the EU and the Eurasian Economic Union alike. Meanwhile, there is much to be done to bring our major associations into rapprochement and work is likely to take some time. Investment in bilateral inter-state contacts can only yield fruit, as Mr. Margvelashvili agrees. He believes that unions are created for co-operation rather than for building obstacles.

Minsk and Tbilisi have outlined several pilot projects for further business interaction, including the establishment of Belarusian lift production in Georgia, and assembly of some tractor models and agricultural equipment. Belarus is ready to satisfy Georgian partners’ needs for agricultural and communal machinery, as well as for city passenger transport, medicines and food. In addition, Belarusian specialists are ready to share their expertise and technologies with Georgia’s agricultural facilities. Mr. Lukashenko assured Mr. Margvelashvili that Belarus is a reliable partner and responds to all good intentions.

Journalists asked the Belarusian President his thoughts on the most sensitive issues facing Georgia, to which Mr. Lukashenko commented, “The President of Georgia has mentioned that, after all the turmoil and conflict between Georgia and Russia, it would be wise to build relations softly, refraining from some steps. This may be true but the President and I are realists. We’ve agreed to draw a line under the past, looking to the future. What steps can be taken to normalise relations between Georgia, Belarus and the Russian Federation? I think, in coming days, we’ll find at least one answer to the question of what can be done to not merely stop this rhetoric but to bring our states closer, living as a single family — as in the past. There are no contradictions between the Georgian, Belarusian and Russian nations. We observe a lack of understanding at a political level, but this can be overcome. We need to set concrete tasks, taking certain steps, as we’ve agreed. I cannot disclose the details of our agreements at present but you’ll hear them in time.” Tbilisi appreciates that sincerity is the best path to co-operation and has signed a joint declaration to further strengthen and develop our relations in all spheres. Our governments now need to liaise to realise these top-level agreements.

At the end of the Belarusian President’s official visit to Georgia, Mr. Lukashenko and Mr. Margvelashvili travelled to Batumi, to talk to the Chairman of the Government of Adjara, Archil Khabadze. The Belarusian Head of State signed an agreement to establish partner relations between Brest and Batumi. Adjara, in the south-west, is among the most developed regions of Georgia, boasting a climate perfect for growing tobacco, tea and citrus fruits, although it has few vineyards. A major tourist centre, it is seeking foreign investments — mostly from the UK, Turkey and Ukraine, and has received state financing to improve roads and to repair and construct water supply systems.