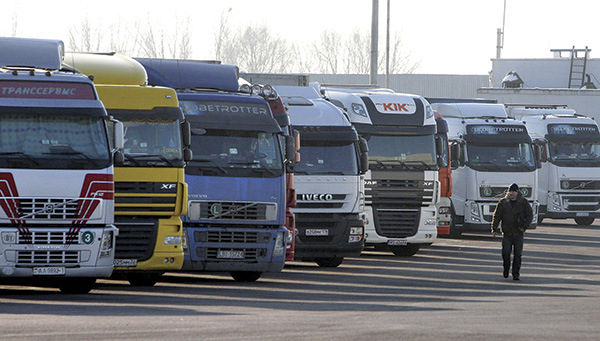 This was noted during the meeting between Belarus’ Deputy Prime Minister, Anatoly Kalinin, and the IRU delegation, led by Secretary General Umberto de Pretto. The IRU representatives expressed interest in further co-operation with Belarus.

The IRU Secretary General mentioned high level of professionalism demonstrated by Belarusian trucking companies, which occupy leading positions on the international market of freight transportation services. Participants of the meeting have also discussed the development of automobile transport and Belarus’ role in ongoing integration processes in the region, the creation of the Eurasian Economic Union, and the implementation of China’s Silk Road Economic Belt initiative. Meanwhile, the possibility of Belarus becoming an important part of the Belt taking into account the rapidly developing logistics system and the creation of the Chinese-Belarusian Industrial Park was also mentioned. The park may become a transshipment hub for cargoes being moved from Asia to Europe.

The IRU representatives were informed about promising development directions of the Belarusian automobile transport industry and about the country’s transit appeal, including in view of the geographical and geopolitical location.

The Belarusian side underlined the IRU’s significant role in taking care of the development of automobile freight and passenger transportation and in improving operation conditions of trucking companies.

The International Road Transport Union (IRU) was founded in Geneva in 1948. It operates in over 100 countries representing interests of passenger and freight automobile transport operators, as well as taxi service operators, at the national, regional and international levels. The IRU is intent on facilitating sustainable development of automobile transport, including by means of introducing innovations and professional training of the personnel.

Following the suspension of the EU sanctions, trade between Belarus and a range of European states is looking up, notes Vladimir Ulakhovich, the Deputy Chairman of the Belarusian Chamber of Commerce and Industry

In particular, according to the opinion of the BelCCI representative, Belarus’ trade relations have become more active with Spain and France. “Crisis phenomena made our partners revise their trade relations, to become more pragmatic,” Mr. Ulakhovich comments.

The BelCCI Deputy Chairman sees the development of Belarusian exports as a key task for 2016. Belarus needs to expand its presence on traditional markets and to master new markets in Africa, Latin America and South East Asia, with help from diplomats accredited in Belarus.

The Foreign Ministry recently hosted a meeting of heads of the Foreign Economic Activity Department, and leading Belarusian organisations involved in promoting national exports abroad, alongside diplomats, trade representatives and honorary consuls accredited in Belarus. Participants heard reports on the export and investment potential of the country, and the activity of the BelCCI and of the National Investment and Privatisation Agency.