New and second hand flats are becoming cheaper, inspiring Alexander Gorval, the Head of the Construction and Architecture Ministry’s Department of Housing Policy

New and second hand flats are becoming cheaper, inspiring Alexander Gorval, the Head of the Construction and Architecture Ministry’s Department of Housing Policy, to ponder whether state orders should become an alternative to housing co-operatives and whether shared-equity construction is to enjoy a bright future. 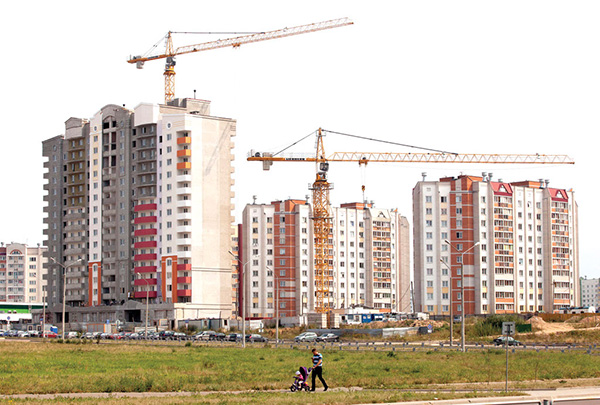 The housing market is seeing prices fall for flats. In H1 of 2015, the cost of each square metre for new-build homes fell by 16 percent, reaching around $1,200 in Minsk and as low as $800 in the suburbs.

The price of accommodation built with state support, for those on the waiting list, has remained unchanged since late 2014, despite the long-held premise that inflation affects all spheres. The current cost per square metre countrywide is almost equal to the average salary: Br7mln (over $460) — against an average June salary of Br6,800,000. You’ve mentioned falling prices for commercial accommodation. Truly, private builders have had to cut their profits: from huge amounts to more modest. If we covert Dollars to Roubles, we could argue that commercial accommodation has risen in price, since 99 percent of our citizens receive their salary in Belarusian Roubles.

It was initially planned to build 5 million square metres this year, including 2.5mln with state support. Not long ago, these plans were amended, so what’s the new figure?

Around 4 million, including individual and rental housing, in addition to accommodation in villages and constructed to state order. This year, around a million fewer square metres will be built for ‘subsidised’ accommodation: the total figure should reach 1.5 million. The same figures (with state support) are planned for 2016.

Falling volumes definitely affect construction organisations. How can this situation be changed?

Everyone is experiencing hard times. Volumes have fallen significantly, as investment programmes have been cut and people lack money. Integrated home-building factories are especially affected, operating at just 80 percent capacity (or less). They would happily export their services but our neighbours, the Russians, are also building less accommodation. Belarusians have been constructing across Russian regions but are still working to less than full capacity. Company managers are seeking out orders but, if they fail, employees must take on fewer shifts in order to keep their jobs. However, hope is not lost. We’re now negotiating with Pskov Region; agreements have been signed to build around 360,000 square metres in Kaluga Region.

In recent years, long delays at construction sites have been rare. Might this problem emerge again?

The key reason for delays is not criminal (as with Terrastroyinvest) but non-payment. If money is not transferred within a deadline, work stops. At the moment, there are about ten such sites in Belarus and the figure has remained unchanged over recent months. Some houses are being successfully completed while others are delayed. At least, they aren’t 150, as it used to be previously.

There’s currently a ban on new housing and construction consumer co-operatives. Will it last long?

Some have been disbanded.

This has happened at the initiative of HCCC members. Seeing that construction of their house is delayed, they seek alternatives. Meanwhile, those on the waiting list (for state support) are satisfied with the system of state order.

Is this mechanism functioning properly?

Absolutely. Over the past six months, 5,158 flats have been built by state order — six times more than in 2014. State orders have replaced housing and construction consumer co-operatives: capital construction managements are now building accommodation using privileged loans and selling them to people on the waiting list.

Russia is planning to abolish shared-equity construction as being too ‘risky’.

We have no plans to act similarly. On the contrary, not long ago, we settled all our agreements to minimise possible risk to equity holders at legislative level. We’ve pegged payments to the National Bank’s refinancing rate for those who might decide to give up on construction plans. As a result, people will be saved from significant losses. Moreover, we’ve a few major organisations able to build accommodation from their own funds, to sell privately on the market. The use of bank loans raises the price of a new flat by around 40 percent so we plan no significant changes. 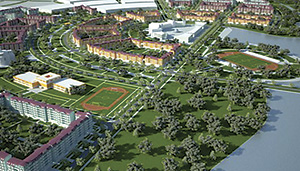 Six such settlements are located no more than 60km from Minsk: Dzer­zhinsk, Zaslavl, Logoisk, Smolevichi, Fanipol and Rudensk, with the latter being viewed as the most optimum alternative, boasting good local transport infrastructure and several industrial enterprises for employment.

Much attention will be paid to developing Minsk’s agglomeration, which is related to developing satellite-cities, the Chinese-Belarusian Industrial Park and the construction of the second ring road. All these have been taken into consideration in developing a new general plan.

Meanwhile, the general plan is only an important document while new homes are still need to be built. At present, only one house has been constructed so far, in Smolevichi. At the end of last year, the 2016 budget was discussed at the city council’s session. In particular, participants focused on the volume of financing for a district of high-rise homes in Rudensk. 700,000 square metres of accommodation (or over 10,000 flats) are to be built there.

Moreover, in line with a Governmental decree, state enterprises and joint stock companies (with a 50 percent state owned share) are obliged to build 250,000 square metres of accommodation in 2016, or around 4,000 flats: 180,000 of these square metres will be in Minsk and in the Minsk Region.