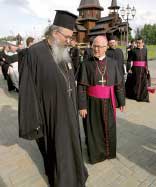 He noted that he and the entire Belarusian nation are obliged to put even more effort into preserving inter-religious peace and national tranquillity. “Belarus is unique in not having a history darkened by religious war or inter-ethnic conflict. We carefully preserve and hand down from generation to generation the good traditions of our ancestors: mutual understanding, tolerance, mercifulness, respect for labour, peacefulness and patriotism,” noted the President.

According to Mr. Lukashenko, Orthodoxy and Catholicism have played their part in determining the mentality and the national character of the Belarusian nation. “Today, Christian belief represents an inalienable component of the outlook and the spiritual life of the majority of our citizens,” he said.

According to the President, globalisation has both positive and negative consequences.