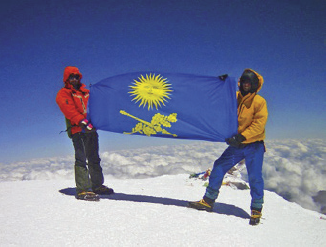 Flag of BSPU on the top of Elbrus


The summer roads of students’ Belarusian summer lie far beyond the country. Good traditions of student labour detachment movements are being actively revived today as fans of active kinds of tourism and mountain climbing go on interesting journeys. According to the Rector of BSPU, Professor Alexander Zhuk, students of the university hoisted the university’s flag on the top of Elbrus in the middle of July.

The participants of the students’ Gorizont (horizon) tourist club began their mountain trip to the Caucasus by ascending the highest mountain of Europe on June, 27th and finishing on July, 16th. “The trip gave rise to an anniversary marathon ‘Centenary traditions — modern technologies’ which is held on occasion of the 100th anniversary of BSPU,” the Rector said. As he explained, the preparation for the expedition started six months ago. Participants of the club developed a detailed route, studied its features and during summer held training on the development of the necessary skills of movement in mountain terrain.

The route lay across the Syltran (height 3,435) and Irikchat (3,667) passes. Then, the participants of the trip ascended up to Achkeryakolsky lava flow and from there made their ascension of the highest place of mountain, a height of 5,642 metres. Alexander Zhuk proudly noted that the flag of BSPU, waving at the top of Elbrus, symbolised the high achievements of the university in the fields of physical training, sports, science and education.

It is necessary to add that the tourist club of BSPU was formed on November, 20th, 1966 and is the oldest operating tourist club in Belarus. Dozens of students which lead a healthy way of life, annually go on the organised pedestrian, mountain, water, ski or bicycle trips.
Заметили ошибку? Пожалуйста, выделите её и нажмите Ctrl+Enter