Nikolai Valuev recently headed an excursion across Belarus for pupils of a St. Petersburg school

Nikolai Valuev is recognised everywhere. Even in Pleshchenitsy, which is far from world boxing. The well-known heavyweight recently headed an excursion across Belarus for pupils of a St. Petersburg school. 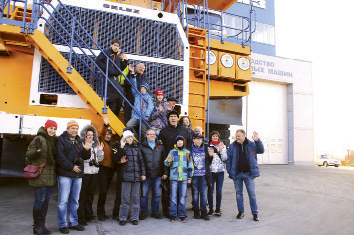 Nikolai Valuev with schoolchildren from St. Petersburg during an excursion to BelAZ enterprise


The Khatyn Memorial Complex was the first destination for the group of students, although Nikolai was inundated there by requests for autographs, photos and interviews. On visiting BelAZ, the presence of ultra-champion Valuev almost brought a whole shift of workers to a standstill, as they stopped to take out their mobile phones and capture photographs. What it must be to be so much in the public eye, constantly ‘in demand’ by fans, without the privacy most of us take for granted.

Many realised Valuev’s star potential back in 2003, when he was performing his brutal wonders at Minsk Circus. At that time, he near ‘massacred’ journalists at a press conference, shocking them with the depth of his intelligent argument. Eleven years have passed for ‘the Animal from the East’, allowing him to rise to the top of world boxing, claiming the title of world champion. It’s an amazing feat.

Is it difficult to be Valuev?

It might be difficult, if you’d been Petrov beforehand! I’ve had 41 years to get used to the idea.

Are you still involved in boxing?

I still box and take part in various activities; my charity foundation works with boxing schools and some of the children are very talented, already winning national championship prizes. This delights me greatly, since they began from scratch.

During your tour of Belarus you’re only allowing the youngsters access to phones, tablets and other electronic devices in the evening. It’s an interesting initiative.

This generation is so different; it’s obvious. However, there’s no need to lament times past. Today’s youngsters are no worse than us: simply different. They live in another age, so we must keep step, understanding, accepting and explaining the dangers of the Internet, just as we were warned of dangers on the street. Of course, they’ll argue against all you say, as they simply want to do as they wish, as we did at their age. Our parents taught us as best they could and we’ll do the same.

Champions often seem to return to professional boxing but you haven’t boxed since 2009: do you desire to relive the past?

I’m a realist, and always have been — so I won’t return. Speculation is senseless. I’ve retired and that’s it. All I’ve achieved was destined; that I have not was also fated.

Are you a natural leader?

I wouldn’t say so. This trip with the children wasn’t my initiative — but I always support such offers. I’m primarily a father. I do worry about how our children will develop, since they should know the history of their country, as well as world history — at least in order to make their own judgements. If we do not help them, a vacuum will appear in their outlook, to be filled by someone else. Look at today’s world. I wasn’t brought up strictly but I learnt quickly the difference between good and bad. I send my son to sports classes so that he can learn self-discipline.

No, swimming. I see no problem with it. If I hadn’t known my trainer, I would never have dared to box.
Заметили ошибку? Пожалуйста, выделите её и нажмите Ctrl+Enter