Belarus increases food supplies to the Russian market by $4.7bn

At the common table

Belarus increases food supplies to the Russian market by $4.7bn

Last year, Belarusian food exports to Russia reached a record level of a 17-percent growth in comparison with 2012, thanks to demand on milk and skimmed milk powder, sugar, butter and beef. More than 80 percent of Belarusian food supplies went to Russia. 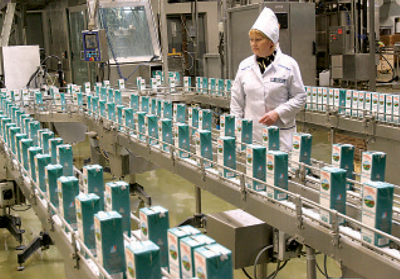 This year, the positive trend continues. For 4 months, food exports to Russia have reached $1.5bn; almost 85 percent of all Belarusian exports. Recently, Moscow has shown its desire to see more Belarusian food on their counters, meaning an increase of supplies to the Russian capital of 15 percent and confirmed by a document signed in Minsk by Leonid Zayats, the Minister of Agriculture and Food of Belarus, and Alexey Nemeryuk, the Head of the Department of Trade and Services of Moscow, during the Belagro-2014 international exhibition.

Overall, 77 Russian regions are consumers of Belarusian food. The biggest amount of supplies, are traditionally provided to the Moscow Region and St. Petersburg, closely followed by Minsk, where there is an opportunity to deliver chilled fresh products within 24 hours. But they know the taste of Belarusian milk and meat products as far away as the Amur Region, where last year, produce was also exported to.

Alexey Bogdanov, Head of the Main Department on Foreign Trade of the Ministry of Agriculture and Food of Belarus, thinks that the revival of export in the Russian direction is a result of bilateral economic co-operation supported by the recent signing of a contract about the Eurasian Economic Union.

“We have constructive relations with our Russian colleagues. Trade and economic wars, and reciprocal claims concerning the allocation of quotas for food export or dumping at the common market have remained in the past. The issues which emerge are discussed within the framework of balance commissions and at the common Collegium of Ministries of Agriculture of Belarus and Russia. It has become possible thanks to agreement of mutual positions and the understanding of tasks allotted before the branch by the Presidents of Belarus and Russia. Not a ‘colliding’ of national producers at the common market, but the planned development of agriculture and processing industry for the purpose of providing food supply security of the Union State, and entrance to the markets of third countries with competitive products.”

Currently, the share of Belarus in the common food import of Russia is 12.5 percent. The large-scale upgrade of the milk section which is held in our country over the last years, has promoted a solid presence on the Russian market. Modern equipment at the processing enterprises, the reconstruction of 1,200 dairy farms, an increase of refrigerating power, strict veterinary and sanitary inspections have all significantly increased the quality of milk products.

But there are also some problems. This year, supplies of counterfeit products to the Russian market have increased. Under the ‘Made in Belarus’ brand counterfeit goods of questionable quality are also being sold. In particular, a so called Belarusian cheese product is sold in Russian chains.  It contains vegetable components that are a mixture of palm oil and casein instead of proteins and adipose. The wholesale price of this product is almost two times cheaper than the real cheese, but at the shop counters, its cost is almost the same as the original, and buyers can’t always distinguish the fake. Concerns about the flow of these counterfeit goods have been brought up many times in Belarus and in Russia, but the problem hasn’t been solved yet.

By 2020, Belarus intends to increase the production of milk to 10,000,000 tonnes from the present 6,000,000. So, alongside with the expansion of our market presence in Russia, our country plans to develop other channels of marketing. At the Ministry of Agriculture and Food of Belarus, they expect that in the near future, a list of more than 60 countries worldwide, which consume Belarusian food, will be refilled with new addresses.