The Marc Chagall Museum and ancient Po-lotsk — the centre of Europe — and host to the annual International Slavianski Bazaar Festival of Arts are, probably, the major pearls that allure foreign tourists to the Vitebsk Region. As 2014 is the Year of Hospitality in Belarus, the country’s northern region decided to considerably expand their tourist potential. At present, there are over 550 tourist routes, including 80 trans-boundary. New attractive sites have appeared and we’ll familiarise our readers with some of them. 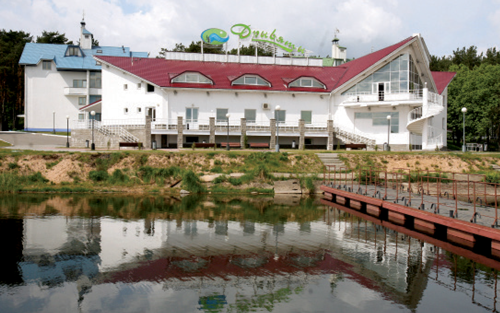 Braslav is not called a natural pearl for nothing. The Braslav lake group, which includes over 30 lakes, is considered to be the largest in Belarus. These originated as a result of the passing and melting of a huge glacier. With its beautiful shores and enchanting landscapes and pine forests filled with the freshest of air, this area is home to rare animals and aquatic inhabitants like lynxes, brown bears, tench, vendaces and eels. All of these act as a magnet for potential tourists.

In order to ensure comfort for those visiting Braslav, a new three star hotel — The Braslav Lakes Hotel — is opening there this summer. A contemporary hotel complex, which is being constructed on the bank of Lake Novyaty, offers 16 rooms and 8 bungalows. It will also boast its own beach and piers on the territory adjacent to the lake. Moreover, according to the Chairman of the Braslav District Executive Committee, Valentina Vysotskaya, there will be also a restaurant there, alongside a karaoke-bar and even a golf lawn. “The hotel will offer its guests high-class services. We’re convinced that both domestic and foreign tourists will be pleased to stay here,” she explained.

Those who prefer to go far away from the urban fuss will be offered a rest in the Lesnaya Polyana agro-tourist complex, which is being built by Russian investors. The first visitors are to be welcomed there this autumn. The facility is situated 20km from Braslav on the bank of the Voloso Lake and consists of 5 cottages, 2 banyas and a café, which are primarily designed for fishers and hunters. Nevertheless, those who simply want to stay in the countryside won’t be bored either, bicycle rental will be available and exciting cycling routes will be developed.

It should be also noted that a project is currently under development that deals with reconstruction of an ancient estate of the Plyatery in the village of Opsa. This is a long-term prospect of tourist development in the Braslav area. Located on the picturesque bank of the lake, the estate will be turned into a cosy hotel by 2017. It will be very romantic to spend several days far from civilisation in a former duke’s manor.

Some are keen on trophies while other — on photo shots

These are primarily Russians, French, Germans and Finns who arrive at the National Park for hunting. Everything starts with an application by phone, fax or email. All the details are available at www.braslavpark.by. The terms of the tour are agreed with the hunter; depending on availability, one can wait from 2-3 days to 2-3 weeks. The organisation of one day of individual wild boar hunting will cost 50 Euros to a foreigner, while one-year-old wild boar hunting costs 90 Euros. According to Mr. Drozhzha, if the hunter fails to shoot an animal, they will have to pay only for the organisation of the hunt.

“Foreign hunters come to us, not only because they are attracted by our affordable prices and guaranteed trophy, but because we also provide a whole range of related services: meeting at the airport, accompaniment, provision of transport, accommodation in the comfortable recreation camps of the National Park, meals and a game warden for the organisation and conducting of the hunt.”

Clients enjoy this, and many of them constantly visit us. Over the least year, there were over a hundred such clients. Each foreigner spends at least 500 Euros for hunting while also leaving another 1,500-2,000 Euros during his stay in Belarus. Meanwhile, not everyone is keen on shooting animals, so some are eager to wander along Belarusian forests and marshes with a photo camera instead of a gun, like, for example, French photographer, Thierry Girard. He has worked in the Berezinsky Reserve, located at the junction of the Vitebsk and Minsk regions in late spring and early summer this year. Coloured and black-and-white works by Mr. Girard, which are created by him with the help of a film camera and a special large-sized camera, can be found in large State and private collections all over the world.

He makes documentary photos, adding his personal views on the surrounding world. He has shot thick woods, as well as streams and marshes. He was also interested in Belarusian villages, therefore many portraits of local residents will appear at an exhibition, dedicated to the 90th anniversary of this reserve that is due next year. The visit of the talented master is carried out thanks to the co-operation between the Berezinsky Biosphere Reserve and the Northern Vosges Regional Natural Park, and was organised under the support of the French Embassy to Belarus.

Seeking for health and impressions

Cultural tourism for the Vitebsk Region is traditional. For instance, many guests annually arrive at the regional centre for the Slavianski Bazaar festival. However, alongside the arts festival, Vitebsk annually hosts children’s summer schools of art which are connected with names of such prominent painters as Marc Chagall and Ilya Repin. Youngsters from Belarus, Russia, Latvia and Germany take part in these forums. As far as Ilya Repin’s Zdravnevo Museum-Estate is concerned, which is located not far from the regional centre, Chief Director of the Vitebsk Drama Theatre (named after Yakub Kolas), Valery Anisenko, has an interesting idea. The theatre’s repertoire has the performance of Shakespeare’s Macbeth, which was performed by Vitebsk actors under the open sky at an international festival. Mr. Anisenko proposes to organise a similar open-air festival in Zdravnevo.

This is only a project so far, but the pilgrimage and recuperation of tourists is rapidly developing in the Vitebsk Region — for example, the inclusion of the Transfiguration Church of St. Yevfrosiniya Monastery and St. Sophia Cathedral in Polotsk into the preliminary UNESCO World Heritage List. At present, these sites will be also expanded with the John the Baptist Roman Church in the village of Kamai of the Postavy District. Such facilities are always interesting to tourists, as are the spas of the Vitebsk Region. Foreigners have long come to the spas and health-improvement camps of the region in order to take a course of wax and ozokerite treatment, needle therapy and mineral baths. Moreover, the Deputy Chairman of the Vitebsk Regional Executive Committee, Vladimir Terentiev, believes that considerable reserves are hidden in the development of corporate tourism. “Last year, the Russian company, Gazprom organised the Fakel (Torch) Festival in Vitebsk for ten days, which featured over 5,000 people. The participants remained pleased and it brought considerable profit to the region.”

Other Russian, as well as Israeli companies have used the ability of Vitebsk residents to organise mass events: both cultural and sporting. This is another good reason for increasing the number of tourists, visiting the region.