The boxer from Gomel Yana Burim lived through a hundred competitions, she owns dozens of medals of various classes. The latest gold comes from the international tournament in Khabarovsk, which took place at the end of May. Yana has been in the sport for 18 years, 13 of which she has spent in the ring.

The result of daily training

My acquaintance with Yana happened by chance. At one of the children’s holidays I heard the invited girl talk about her mother. ‘My mom, you know, left for boxing competitions.’ It turned out that Yana Burim was performing in distant Khabarovsk these days, defending the honour of the country at an international tournament. She brought gold medal home — the only one of the seven medals that the team won. How could I not ask for an interview?
A brick high-rise building hid in the shady courtyards of an old residential neighborhood. We press the buttons on the intercom and hear the sonorous voice of the hostess inviting to go to the second floor. We go up. Smiling Yana awaits us on the threshold, “What should I show to you first? Kitchen or hall? Oh, you asked me to prepare the medals, I’ll do it now!”
The girl opens the sliding door wardrobe and takes out a heavy box. There are many awards inside — they are the result of resilience, dedication and many years of daily training of their owner.
Medals spill out onto the bed with a clang. Yana tells sorting them, “This one is for the victory in the Cup of Belarus, this one is for the national championship. I won this medal in Bulgaria, and the one next to it at the international tournament in Latvia.”
The medal from Khabarovsk is heavier than the others.
“Just hold it! How much do you think it weighs? 254 grams!” Yana handed a sparkling award.


Paper medal is the most important! 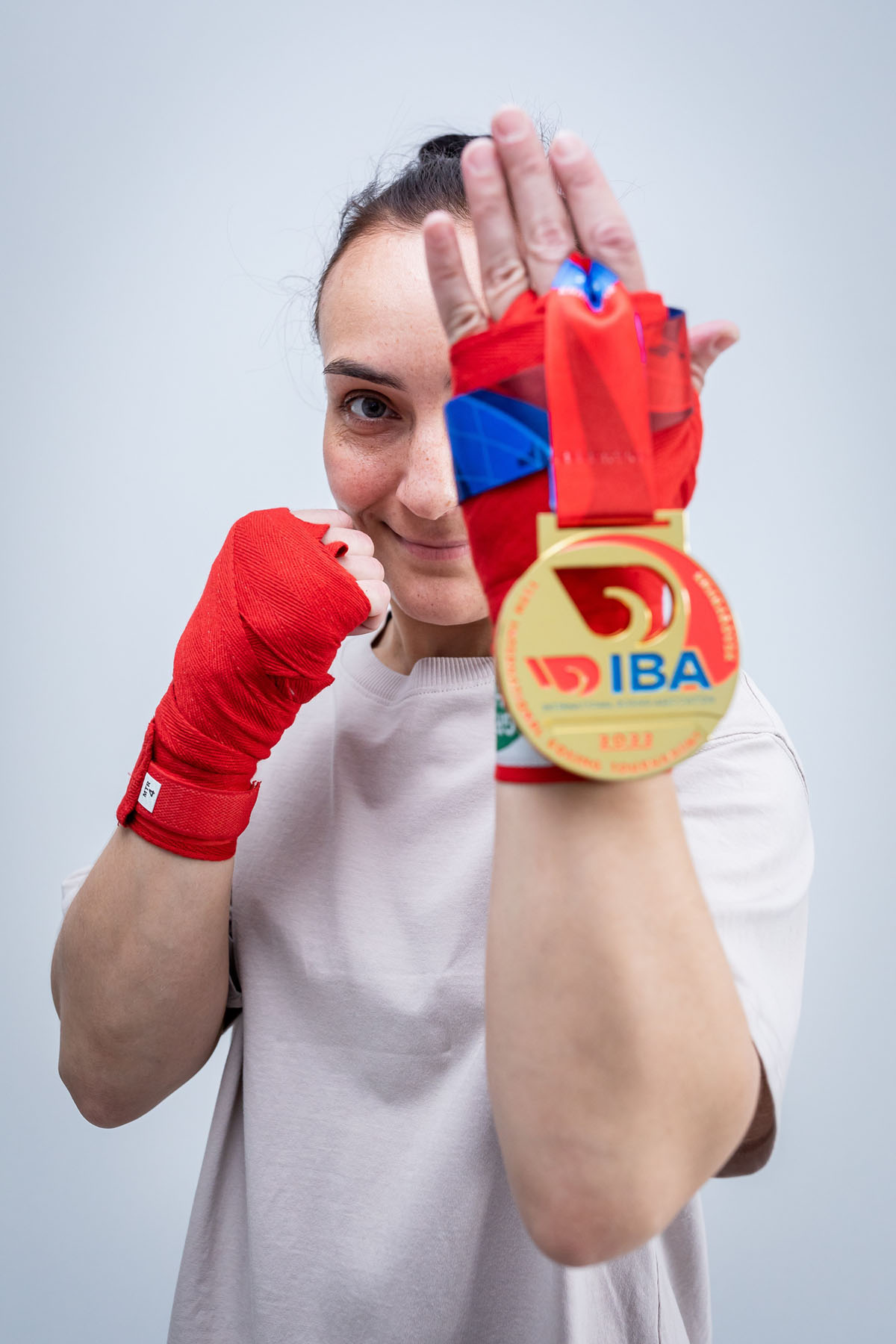 In the palm of the girl is the medal dearest to her heart. Paper, on a thread. On it is written in children’s handwriting ‘For the 1st place.’ Yana smiles, “This is a gift from my daughter. It so happened that I can only see my family on weekends. Five days a week I live and train in Minsk. This year, we have training camps almost every month. It also happens that I don’t come home for two or three weeks. Since the beginning of the year, we participated in competitions for four times. Before that, we could not leave because of the pandemic. Now the entire planned calendar is being revised. It’s good that the boxing federation finds solutions and we can show the results of the work invested in training.”
“How do you assess the current level of women’s boxing?”
“In recent years, it has developed so much that it is possible to understand who is boxing now — a man or a woman, only by whether a helmet is worn. Men now compete without it. Cruelty, cunning, perfected technique, precision, balance — these are the characteristics of modern fightings. With great pleasure, you can watch both power boxing and well-thought-out intellectual meetings of rivals.”
Yana is 34 years old. In amateur boxing, one can compete up to 40. And then what? Yana admits, “So far, it is difficult for me to answer this question. Maybe I’ll go to coaching. Once I worked with children, it was a valuable and interesting experience. I like children’s dedication, their sincere diligence. It is important to understand that each child needs an individual approach. The coach has to feel how to communicate with children, understand when to reduce and when to increase the workload.”

During the conversation, it turned out that Yana still has an alternative option for the post-sport period, “I love to cook. This is my passion, relaxation and hobby. Yesterday I came from Khabarovsk and made tiramisu and nuts with condensed milk. This is after 27 hours of travel! Let’s go taste!”
We, of course, did not have the required perseverance in the face of such temptation. A French photo landscape with a landmark recognisable all over the world is spread over the entire wall of the kitchen. 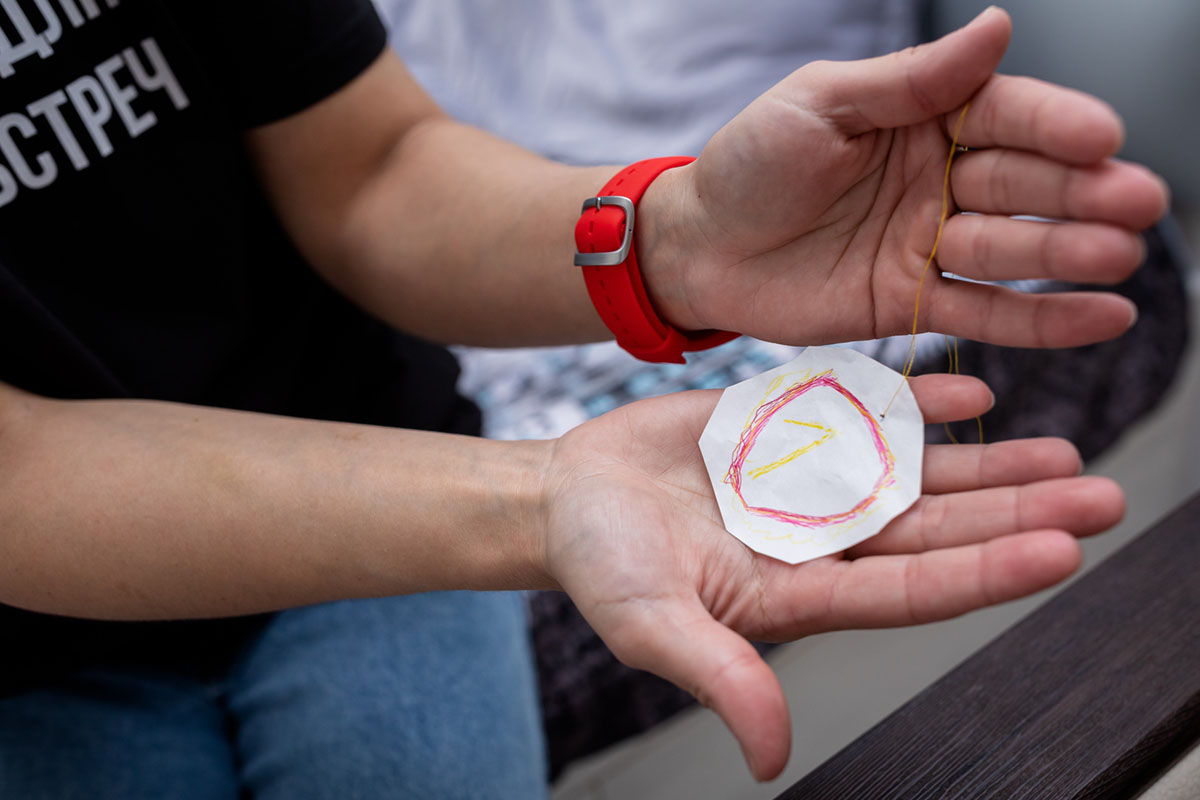 Yana points to the Eiffel Tower, “That’s where I want to go! France will host the 2024 Summer Olympics. Amateur boxing is also included in their programme. It would be a great honour for me to represent my country in the ring.”
I can’t help but ask Yana where her love for sports came from. It turned out that physical education was on a par with all other subjects at her school, “I loved these lessons! My teacher Aleksander Vasilkov always seemed strict. But this severity was on point, no one even thought of missing a lesson! For example, we should have a skiing lesson according to the plan. But the street looked like more like one big ice skating rink than the winter from the stories of Mikhail Prishvin. It wasn’t a problem, we just went to the warehouse with the entire class, we got skis — full speed ahead! The teacher encouraged us and told that the weather is good, the skiing is excellent, which means we will slide faster than usual! And we rushed! Now I remember these lessons with great warmth and gratitude. One had to try to get a good mark from Aleksander. I say this in all humility, I almost always had 10 points.”
Except for physical education lessons, Yana’s path to sports began at the age of 16, “First it was a gym. Then I enrolled in the taekwondo section, but three workouts a week was not enough for me. The solution was found very quickly. I got up at six in the morning for individual training at the stadium: I ran, did push-ups, pulled myself up, worked out abs.”
Yana entered the Francisk Skorina Gomel State University at the Faculty of Law, after which she studied at the Faculty of Physical Culture and Sports at the same university. She received a boxing coach diploma from the Olympic Reserve School. During this time, she became a master of sports and the owner of a black belt in karate, she was also engaged in Thai boxing.
“How do your parents feel about their daughter playing such a tough sport?”
“Mom gets worried when she sees my bruises. Dad — no. Either masterfully disguises it. He can come up, take my chin, look at the black eye and say with a smile ‘Hmm, you have to work on the defence...’ I was pleasantly surprised after returning from Khabarovsk. It turns out that my parents watched all my fights, which were at five in the morning, our time! I called them to say that I was the first, and they told me that they know and they watched it from start to finish. I can’t even imagine what could be more valuable than this.”