In the very near future, Belarusians will be able to participate in the development of the Vostochny Cosmodrome. The agreement on this was reached during a two-day working visit of the President of Belarus to the Far East. And already in 2023, the Belarusian cosmonaut will go out to the ISS. 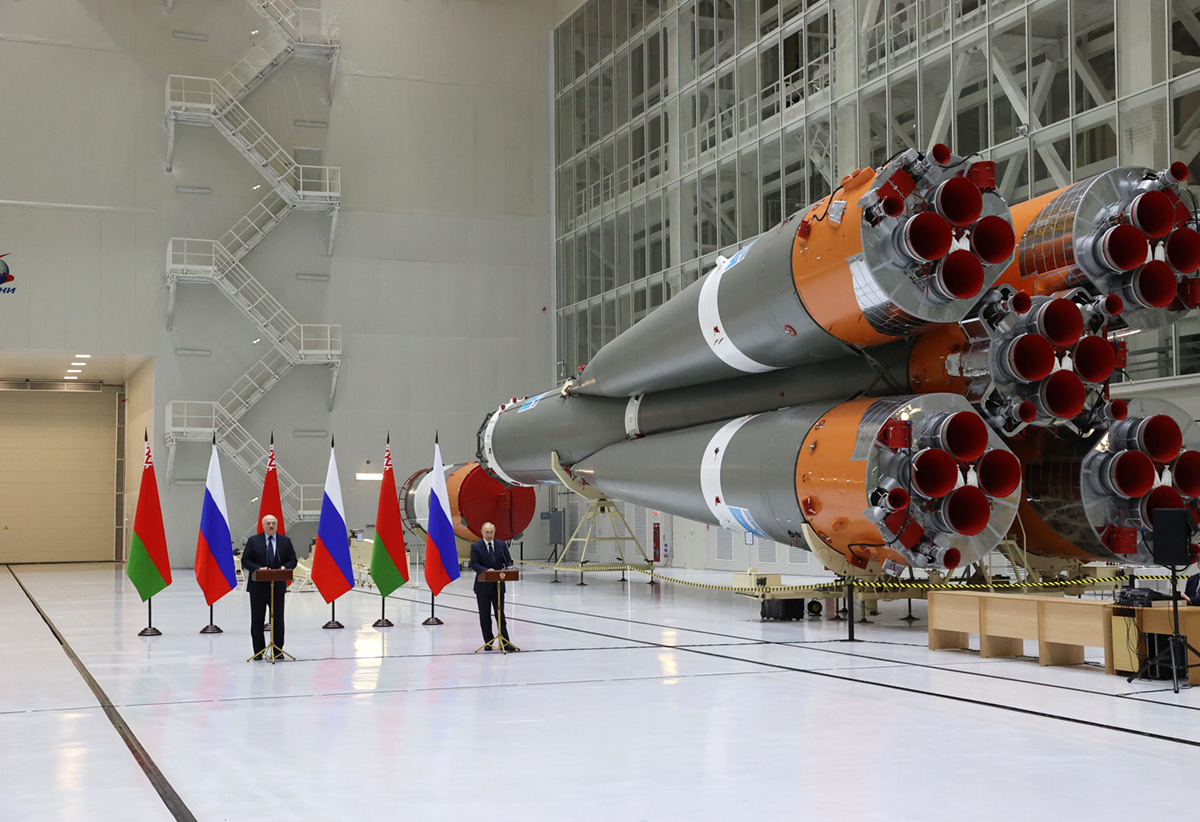 
On Cosmonautics Day, the Presidents of Belarus and Russia visited the Vostochny Cosmodrome, where they inspected the infrastructure, held talks, and then answered journalists’ questions.
Aleksandr Lukashenko became the first foreign leader to visit this spaceport, which demonstrated the highest trust. The presidents arrived at Vostochny together by helicopter. They talked with the staff of the cosmodrome, held confidential negotiations, discussing space, economic co-operation plans and the further development of the two countries under external sanctions.

“Space is our common topic. During the Soviet era Belarusians made a significant contribution to the development of cosmonautics. We have managed not only to restore the former skill sets but to develop many new ones with the help of Russia. As a result, Belarus has entered the club of the space powers,” reminded Aleksandr Lukashenko.

“It is important that we managed to preserve and expand co-operation on space research with our Belarusian friends. The countries implement joint programmes in the area. We will continue to strengthen co-operation in this very significant area,” Vladimir Putin noted. According to him, workers and specialists, companies and enterprises of Belarus will very soon get an opportunity to participate in the development of the city of Tsiolkovsky and the Vostochny Cosmodrome.
“I won’t leave it unanswered. Why do we bother about these sanctions? Won’t we be able to build houses?” promised Aleksandr Lukashenko to the employees of the cosmodrome.
So, the Belarusian side must select a group of applicants for a flight into space by June 15th. In addition, Russia and Belarus will jointly participate in a major project for the production and launch of special spacecraft for remote sensing of the Earth. The two allied countries also intend to jointly form the infrastructure in this area. This, according to Vladimir Putin, guarantees the Union State independent access to space. The creation of plasma engines is also recognised as a promising direction.
Vladimir Putin and Aleksandr Lukashenko have no doubts: the Union State will not only survive, but will also flourish, because import substitution will only benefit.
The President of Belarus emphasised,

“Today we already have to look into tomorrow and lay down a brand new economic strategy of development of construction of the Union State of Belarus and Russia in the long term. They say the world will never be the same. It is true. To those, who would very much like to return to the past, as they say, into a comfortable environment, we can say right now: you have to forget about it. The modern world is a fierce struggle, a clash of civilisations.”

The President of Russia supports his Belarusian counterpart

“I am convinced that in the current situation, when Western countries have unleashed an all-out sanctions war against Russia and Belarus, it is important to deepen our integration within the framework of the Union State. Mr. Lukashenko and I share this view. We will continue to jointly oppose any attempts to slow down the development of our countries or artificially isolate them from the global economy.”
The personal meeting of the two leaders lasted three hours. Vladimir Putin urged to use all potential opportunities to support each other. Aleksandr Lukashenko assured: Russia can count on Belarusians, Belarus will be together with Russia and will stand side by side in all situations.
Speaking about external pressure, the President of Russia said that the ‘blitzkrieg’ of the West had failed and would now boomerang at their authors — sanctions would lead to inevitable internal political problems in the European Union itself. And the continued introduction of restrictions can provoke famine in different regions of the world and new waves of migration, including to European countries.
Aleksandr Lukashenko added,

“We once decided that the Cold War was over, that that page was turned over, and we will live in a new civilised and fair world based on mutual understanding and the triumph of international law. We thought so. But the West didn’t. They didn’t destroy us then. They’ve decided to try now… No sanctions will tilt us or lead us astray!”

The presidents spoke that day about the situation in Ukraine, including the events in Bucha.
“We’ve discussed this special operation of theirs in detail — a psychological operation staged by Englishmen. If some of you need addresses, passwords, places of secret meetings, plate numbers and brands of the vehicles those people used to come to Bucha and how they did it — Russia’s FSB can share these materials. If you don’t, we can help in this regard. Together with our Russian friends we have gotten to the bottom of this nasty and disgusting position of the West from the first hour to the last one,” Aleksandr Lukashenko emphasised later during a conversation with the media.
Vladimir Putin, in turn, said, “Today Aleksandr Grigoryevich gave me the documents, which were handed over to the Federal Security Service. The documents identify how, who (they have the relevant intercepts), on what vehicle came to this population centre and created conditions for organising this fake.”
The working visit of the President of Belarus to Russia also included a meeting with the Primorye Territory Governor Oleg Kozhemyako in Vladivostok and a visit to Russky Island. The conversation was about specific mutually beneficial projects. Representatives of Primorye offered to create here a single service centre for the maintenance of Belarusian equipment. Now the region is actively purchasing Belarusian combines, road equipment, buses. Local enterprises have their own small service stations, but, according to the Governor, it is necessary to actively develop this area of co-operation.
“It is necessary to advance to a new level, create a single centre to instantly respond to all kinds of needs, like maintenance, training, exhibitions. Deliveries from Japan and Korea that have always dominated our market are winding down. I think Belarus will take their place with its machinery and equipment, which was previously imported,” Oleg Kozhemyako believes.
Aleksandr Lukashenko spoke about the need to create highly efficient joint ventures, “We agreed that we should move forward in creating joint assemblies here. To carry less back and forth, and to produce what is needed here.”
The issues of purchasing Belarusian mining dump trucks were also touched upon. By the way, Belarusian consumer goods: clothing and furniture are especially popular in Primorye. For three years, Belarus has increased food exports to Primorye by more than seven times. However, local farmers and industrialists successfully use equipment from Belarus. The Belarusian elevators have also proved to be excellent. The region plans to replace more than 1,300 elevators by 2030. Based on this, 80 to 100 elevators per year are purchased from the Mogilev plant.
Seafood is actively transported from Primorye to Belarus. As a result, the Governor of the Primorye Territory noted, the trade turnover with Belarus has increased three and a half times in three years. By the end of this year, it will reach six billion Russian rubles.
As the governor noted, the prestige of Belarusian builders is high in the region. They participate, among other things, in the construction of a cultural and educational centre on Russky Island, in which the President of Belarus took part during the visit and personally got acquainted with the progress of work. There will be a choreographic, music school, a kindergarten, a boarding school. A boarding school for students who will be trained in music and ballet, residential buildings for employees and specialists of the complex are also being built.
Aleksandr Lukashenko said that Belarus intends to seriously work with the Primorye Territory,

“I am glad that Belarus will grow together with Primorye in economic terms. We are serious about working here…”