The President gave an interview to one of the largest international news agencies — Associated Press. The frank conversation lasted almost an hour and a half. Vice President of Associated Press Ian Phillips was the interviewer. Various questions were raised — from hot international topics to the internal situation in our country. However, most of the conversation concerned the special military operation of Russia in Ukraine and the position of Belarus on the Ukrainian issue. Aleksandr Lukashenko stressed the main thing, “We are resolutely against wars. We have been doing everything to prevent this war.” 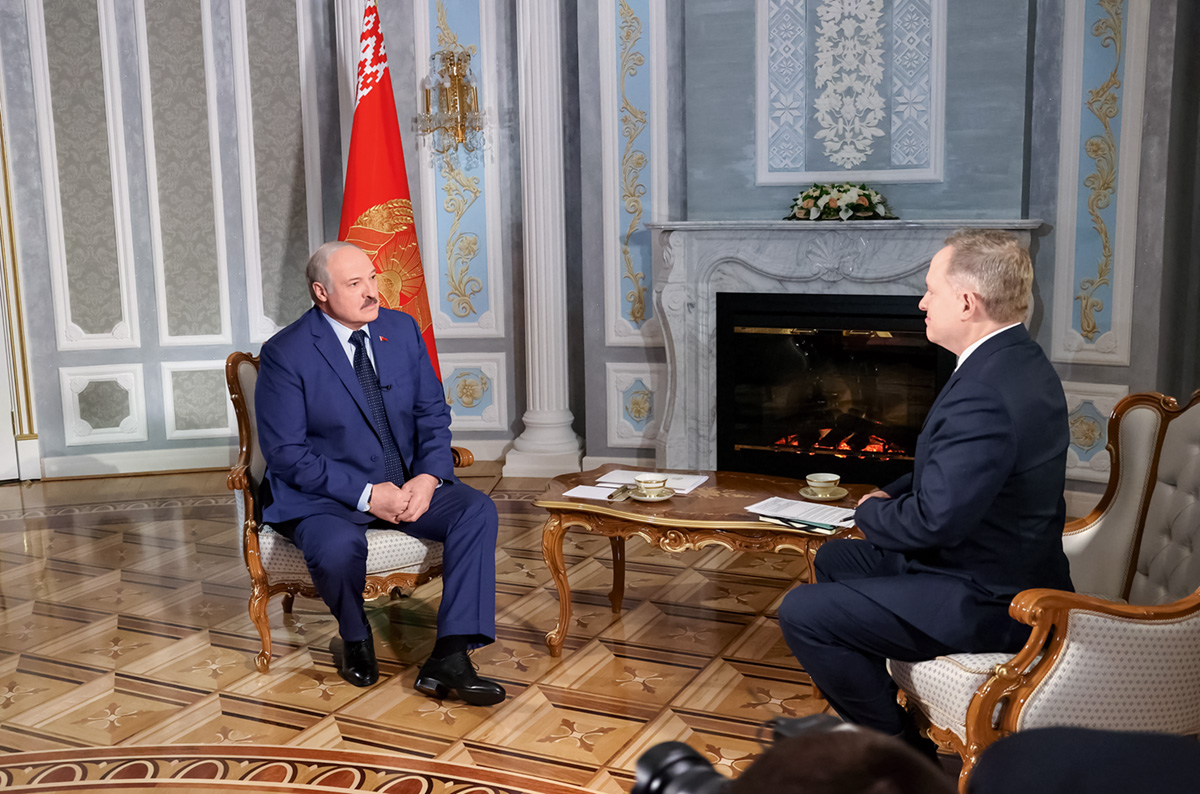 
‘We do not threaten anyone and are not going to. The West can sleep peacefully’

The Western journalist started the conversation with a snap inspection of the Armed Forces of Belarus by the Belarusian side. Ian Philips asked about its goals and whether this can be considered a signal of Belarus’ readiness to take part in a special military operation in Ukraine.

“The answer to the second part of the question is no. We are not going to take part in a special operation in Ukraine, because there is no need for it. Everything that we can offer and could offer the Russian Federation — it already has it all. Therefore, there is no need to take part in this special operation... We do not threaten anyone and are not going to… The West can sleep peacefully,” Aleksandr Lukashenko said.

As for the actions of our Armed Forces, the President noted that recently they (including the Allied Resolve 2022 joint Belarusian-Russian exercise in February) were closely related to actions of the NATO bloc (particularly in Poland and the Baltic states) and rising tensions around Belarus, “I’d say tensions around Belarus are being whipped up even more fiercely recently. Naturally the Armed Forces forced to respond to it. We knew about it even before the NATO bloc began exercises in Poland and the Baltic states. We saw that countries of the NATO bloc, including the United States of America, the UK, are redeploying troops towards our border. Their number totalled 3,000 several years ago. Now it is 32,000.”


‘The use of nuclear weapons is unacceptable’

The nuclear weapons that Russia has in service are of great concern to the collective West. The journalist asked Aleksandr Lukashenko: ‘Is it possible that Russia will use it? Do you think this is acceptable? Isn’t this a ‘red line’?’ The President stated,

“I am absolutely sure that the use of nuclear weapons is unacceptable, also because of the proximity. We are not so far away like the United States. This may deorbit our planet and send us spiralling into space... I will tell you one thing I have been thinking about all the time recently. You know, it seems to me, kind of wild thought that if, for instance, Poland and other countries continue behaving the way they do now, then we, Belarus, Russia, and Ukraine will fight together against you.

Because individual people and politicians in Poland are sharpening their swords already and see Western Ukraine as part of Poland. In other words, they are thinking about Ukraine’s dismemberment. Even the current leadership of Ukraine cannot condone it. Ukrainians themselves will not be able to resist so-called current allies. This is why I don’t rule out the possibility that we, the three Slavonic nations, including Ukrainians, will have to defend Ukraine’s integrity.”

As for Volodymyr Zelenskyy, the Belarusian leader is convinced that he is not independent in action,

“I would like him to be an independent person who understands that the war is going on in Ukraine, not in America, not in Poland, not in Belarus, not in Russia. In his country.”

The President added that Zelenskyy is not stupid, but he cannot act independently due to pressure from outside, and also because there are enough forces within Ukraine itself, ‘which will not allow him to establish peace diplomatically today’, “This is how I see it, I may be mistaken. But I see more and more clearly that I tend to be right. His behaviour? Well, I do not know, he should act as a president. It is time to shave, dress properly and show the Ukrainian people and the global community that he is doing better every day. This is the image he should build. This game is going on for too long. Nevertheless, he is a filmmaker, he is an actor, an artist, he knows better, and he is living in a certain situation. I am not as immersed in this situation as he is. So I won’t judge him.”
The Head of State is extremely negative about the fact that practically two neighbouring countries are at war. Countries, which are very close for us.
Aleksandr Lukashenko once again reminded that Ukraine is not a stranger to him and his roots remain there. But Russia is also a fraternal, the closest state to us.
The President noted that it was thanks to Belarus that the negotiations between Ukraine and Russia were launched,

“I know Russia’s position. I know what Russia offers to Ukraine. But why Ukraine, on the territory of which there is actually a war, combat operations, people are dying, is not interested in these negotiations, is another question. You need to look to Washington for the answer to this question…

The United States of America and the West are racking up tensions by supplying weapons and the rest instead of ending the war in Ukraine, instead of ending it decently now. I dare assure you that Russia is taking it easy on Ukraine. It is only the beginning. And it has to be finished first. There is no need to whip up tensions. There is no need to reproach us for siding with Russia. Frankly speaking, there is only one country on the side of Russia now — Belarus. On the other hand, as many as 50 states have united and not only with weapons, but also with soldiers, they help Ukraine fight with mercenaries. What for? What I am saying, we have not learned from the media. We see well what is happening in Ukraine. We categorically do not accept any war. Furthermore, we did and are doing everything now to ensure that this war does not happen.”
Answering a question about the consequences of economic sanctions, Aleksandr Lukashenko noted,

“We will survive. Everything that we produce is in demand on international markets today, which means that it will be sold one way or another, mostly in Russia. Therefore, I am absolutely convinced, I do not hope, but I am convinced that we will hold out.”

The Head of State also recalled the incident with the Ryanair aircraft, “What aren’t you asking me about this? Why don’t you list it as a claim against me? Because it was all made up on your part. ICAO specialists figured it out — there was no reason to blame us for it. It was followed by silence. Everything will clear up soon. Your sanctions are illegal, especially the ones against Belarus. You criticise me for being an aggressor, Putin is number one, I am ‘Putin number two’, ‘co-aggressor’ and so on. I have just told you: you are bigger aggressors than I am, because you are involved directly through private military companies, mercenaries, and you supply weapons to Ukraine.

Our people do not accept war. I do not accept it. I do not want this war. Now is the time when this conflict is moving to a qualitatively new level, and then it will be difficult to stop it. And God forbid, things escalate into a nuclear conflict. It will be it! So let’s stop it.”

Aleksandr Lukashenko added that if the West doesn’t like something, they just immediately silence their opponents, “Neither us, nor the Russians can express a different point of view in your YouTube, Twitter and so on. No one can. You have banned it and that’s it. In addition, you keep stirring up only one topic. Fake news, actually. This is your freedom of speech. Here journalists express their points of view on Russia, the West and so on. The only thing, which is forbidden, is to destroy the country. We have learned it from you. You do not allow anyone to destroy the United States… Am I doing something unusual? We are good at learning from you. I’m quite good at this either, sorry for being indiscreet, I’m learning from you.

We have much more freedom of speech and democracy, which you constantly talk about, than the stronghold of this democracy does, I mean the United States, England and the European Union.”

***
Ian Philips shared his impressions with journalists after an interview with the President,
“We had a fairly lengthy and open interview. We have been able to discuss a broad range of topics — from the situation in Belarus to hot international issues. Of course, our opinions did not always coincide. Yet, it is important for us to be able to hear the positions of all sides. Therefore, one of the goals of our agency is interviews with leaders of states. This allows us to present objective information and reflect the situation in full scale.”