Strengthening the Air Force and Air Defence Forces, holding a constitutional referendum and the lessons of Kazakhstani events. Details of the working trip of the President to the Luninets District. 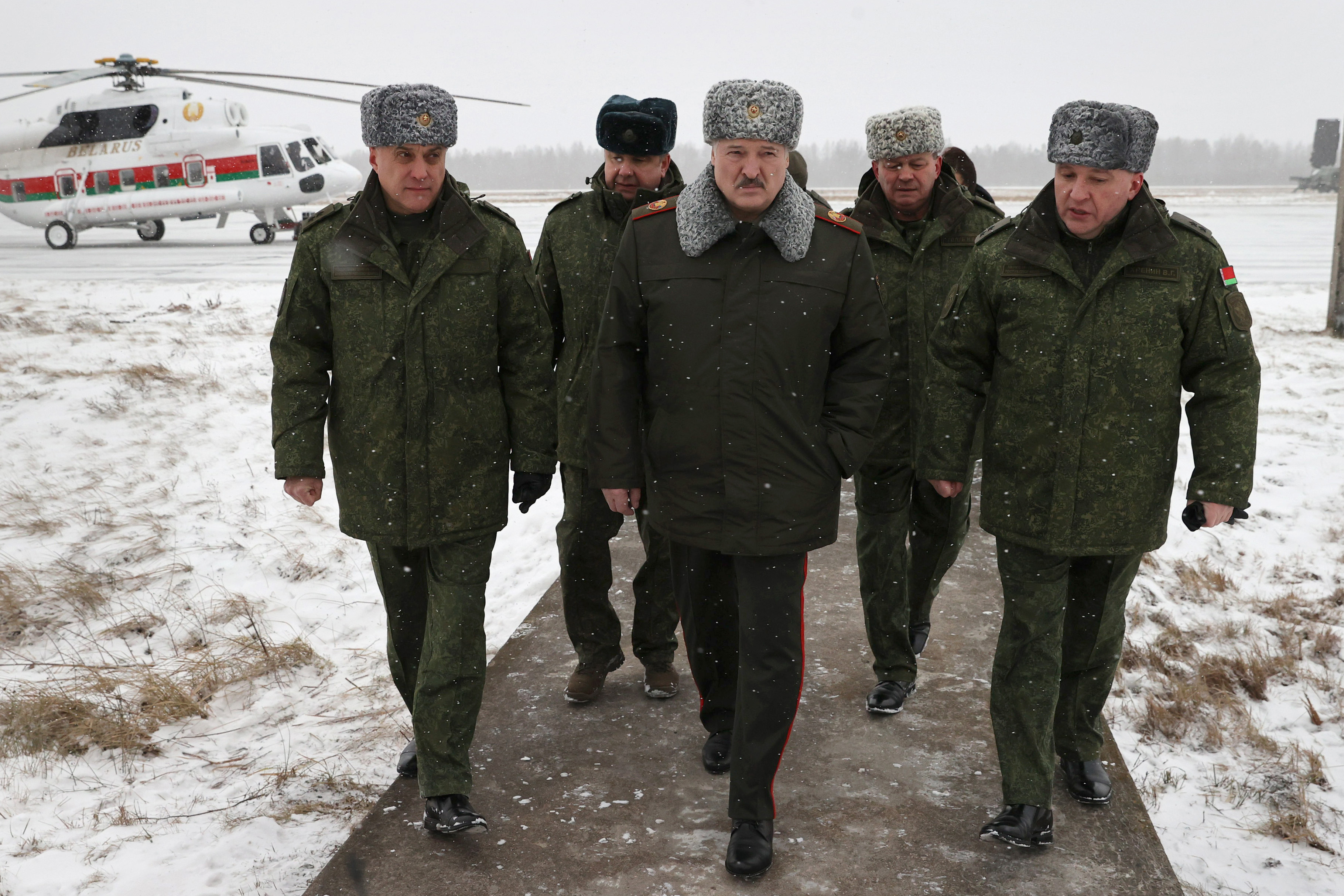 The place of the third meeting of the Commander-in-Chief with the military leadership of our country in recent time was chosen for a reason. From the point of view of state security, the airfield near Luninets is a strategic point, located not far from the southern borders of Belarus, near which tension is only growing now. We need to cover them from the air. The militarisation of the western neighbours is also in full swing. Therefore, the formation of another air defence unit is on the agenda. In this regard, Aleksandr Lukashenko did not fail to warn the West against attempts to attack the Union State,
“We don’t want war, but if they don’t just constantly pull us, as they are doing now, but deploy armies against us, intimidate us and put us on the brink of survival with all sorts of sanctions, economic and non-economic ones, and threaten us even more, then we will hit hard. Don’t mess with us, we can’t be defeated.”

So that we don’t get caught off guard

The programme of the presidential route includes a number of military facilities in the Luninets District. The Commander-in-Chief, in particular, was informed about the organisation and fulfilment of the tasks of combat duty in air defence. Belarusians see what is happening in the south and in general along the country. We know how to act today. It’s with regard to ‘as it is now’. However, the meeting on strengthening military security discussed the issue of how it will be.
“There is a wise saying: if you want peace, prepare for war,” noted Aleksandr Lukashenko. “It is cruel, but so masculine.

We must do everything to ensure that we cannot be taken by surprise, and that we can respond at the right moment.

I am absolutely convinced that you, people in uniform, know what needs to be done to protect our land.”
Aleksandr Lukashenko lamented that 10 years ago no one imagined that to protect the southern borders in Belarus, military units and even an entire association would have to be created. And that’s why, “With pain in our hearts, we are watching everything that is happening in Ukraine. Its current political leadership, being under external control, sometimes behaves unpredictably and inadequately. Therefore, in case of unpredictable, inadequate actions, and in case of, God forbid, military actions, we need to be decisive. Almost one and a half thousand kilometres of the southern border of Belarus and Ukraine is a considerable length.

Whatever it costs us, we need not only to see what will happen and is happening on this border, it must be reliably protected.”

By the way, the Head of State will name more than one or two examples of unpredictable and inadequate behaviour of the Ukrainian authorities. The President stated with regret that everything that is possible is being torn out of the souls of Ukrainians. The memory of the Slavic peoples, common roots, language, cultural and ethnic code that binds peoples, “Everyone is trying to destroy the Ukrainians in the soul. We did not imagine that several decades after the end of the Great Patriotic War, thugs with a fascist swastika would march along the central streets of Kiev and other cities. This is unacceptable for us, because we will never forget everything that happened on our land. In the end, we remember Khatyn, we remember what happened. And not only what happened, but who did these atrocities there. This is also one of the reasons why we are forced today to respond here, in the south of our country, to the situation that is developing.” 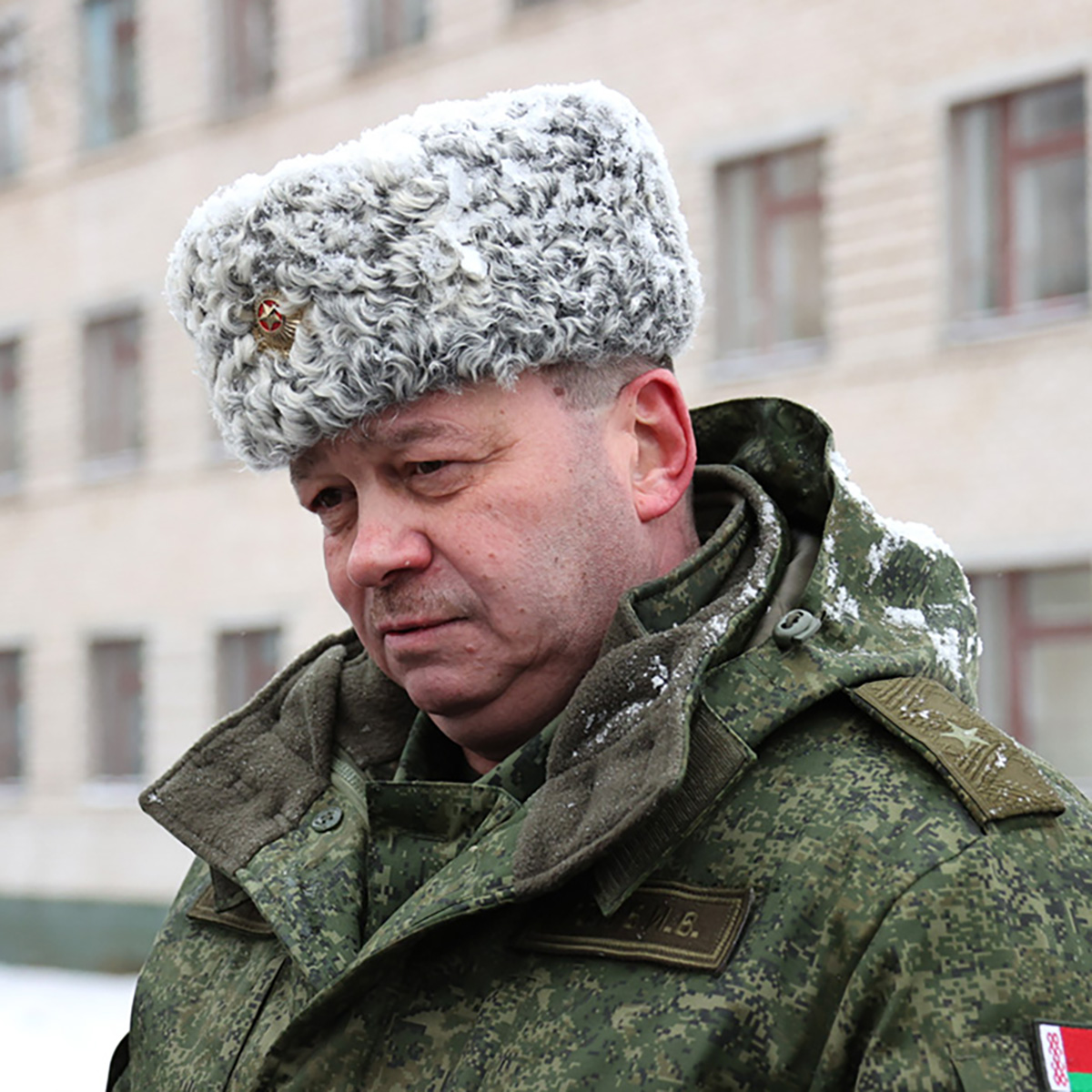 Commander of the Belarusian Air Force
and Air Defence Forces Igor Golub
For obvious reasons, the meeting with the security forces was mostly closed to the press. But, despite the piercing wind and heavy snow, the journalists patiently waited for the Commander-in-Chief to hear first-hand comments on the most pressing topics on the agenda. And, to be honest, they thoroughly froze,“Are you cold?” greeted us Aleksandr Lukashenko. “Just imagine what a war is... Therefore, God forbid we end up in the state of war. Especially after we ourselves are accustomed to living in warmth, with complete comfort. This is not the generation of the Great Patriotic War that lived…you know in what conditions. And we are already accustomed to a good life and very keenly feel what war is. Therefore, everything must be done to avoid it.”
“We don’t want war!” This phrase, answering the questions of journalists, the Head of State will repeat more than once. Moreover, he will speak not only as the President of Belarus and the Commander-in-Chief, but also as the Chairman of the Supreme State Council of the Union of Belarus and Russia, “Not only because it is hard and bad. This is not just discomfort — it is terrible for a person, for people and not only for military personnel.

God forbid war, it will affect everyone. That’s why we don’t want to fight. We also don’t want to, because we remember what kind of war we had, which ended seven decades ago.”

And one more very emotional nuance. The President draws attention to the fact that we have to build the most expensive security system to defend from close people! At the same time, he warns: there is no need to pull us.
“In spirit, we are such people that it is impossible to defeat us, and in terms of territory — from Brest to Vladivostok,” said Aleksandr Lukashenko. “Many have already tried the for the last 3-5 centuries. How did it end? It’s clear.”
And if someone considers Belarus an aggressor...
“We do not meddle into anyone’s affairs, we have enough land, God help us keep and develop it. Here are our goals.

But I repeat once again: if someone doesn’t understand all this, our response will be tough.” 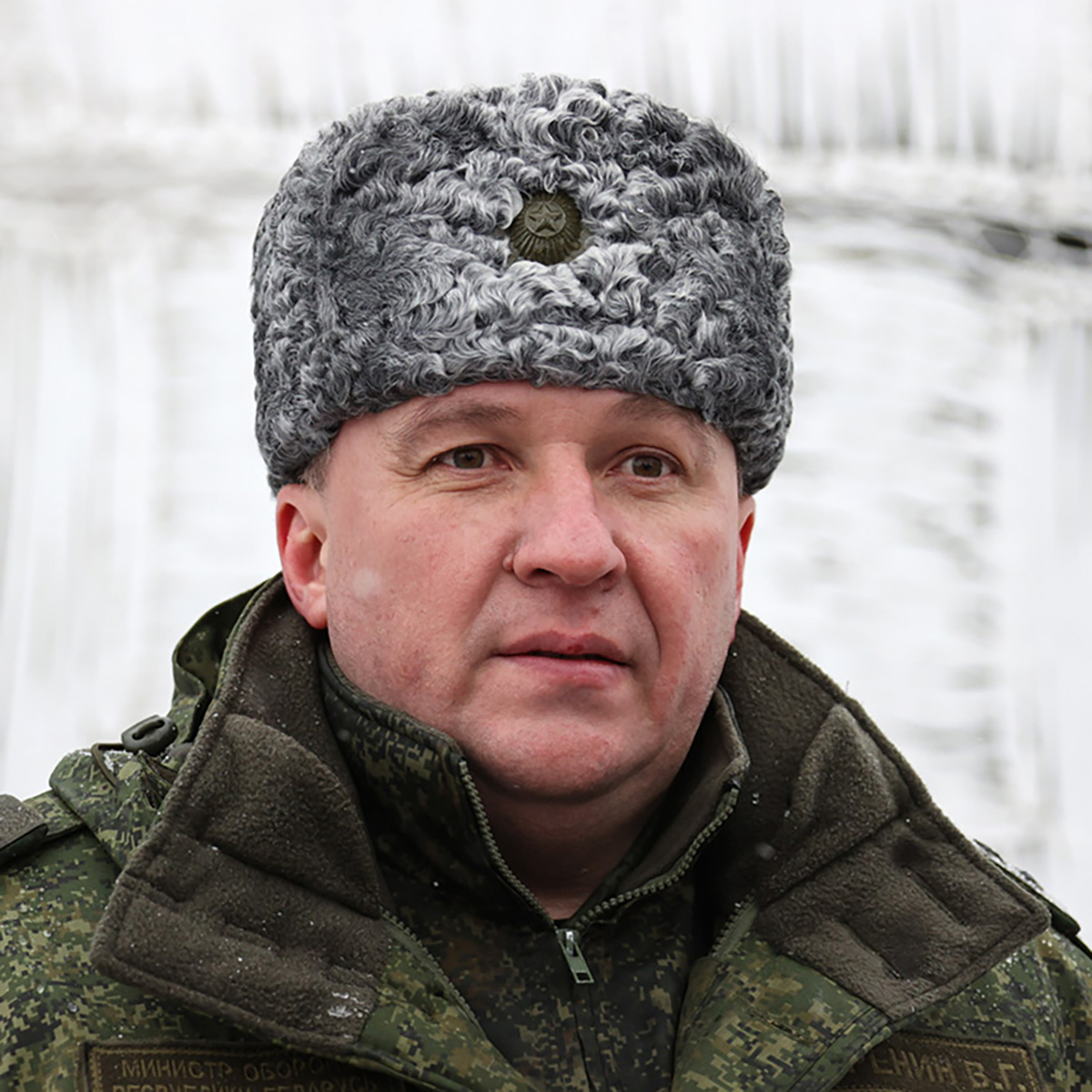 Belarusian Defence Minister
Viktor Khrenin
Especially stubborn foreign politicians and runaway ill-wishers are trying with all their might to accuse our country of aggression, almost of ‘air terrorism’, for strict adherence to all possible instructions and international norms. We are talking about the forced landing of a Ryanair plane in Minsk, which was on a flight from Athens to Vilnius. ICAO, after 9 months, has finally presented an absolutely neutral report. At the end of January, the council will consider the report and take appropriate action, and will also discuss the request of Belarus on the legality of the sanctions imposed on it.
“We would like to know your opinion about what to expect from this organisation? Are they ready to tell the truth or will they continue to sound the position of the collective West? Maybe they will apologise to us, open the sky to the West and for the West?” the journalists asked the President.
He replied that the best solution for the ICAO Council now would be to put the brakes on the situation. And he even called the members of this organisation ‘heroic people’, “With that pressure (this is a UN organisation, you know that we are not just in the minority there, we are alone there), they nevertheless had to admit that Lukashenko did not open fire on the plane, did not fire at it, that he did not raise the MiG to force the plane to land. Listen, they are heroes because they were able to say at least that.”
According to Aleksandr Lukashenko, this fact alone is important for Belarus, nothing more is expected from the investigation, “If they are ready to prove otherwise, the facts are on the table. There are no facts, we also see it: now it has been sent to all ICAO member countries. You know who’s in charge there. The best thing for them is to put brakes on everything, not to go into it too deeply. Because the farther into the forest, the thicker the trees. Therefore, there is no need to go too deep: nothing good awaits them. And we shouldn’t expect them to kneel before us or even stand up and apologise. I don’t expect it. The whole world understood where is the truth and where is the lie.” 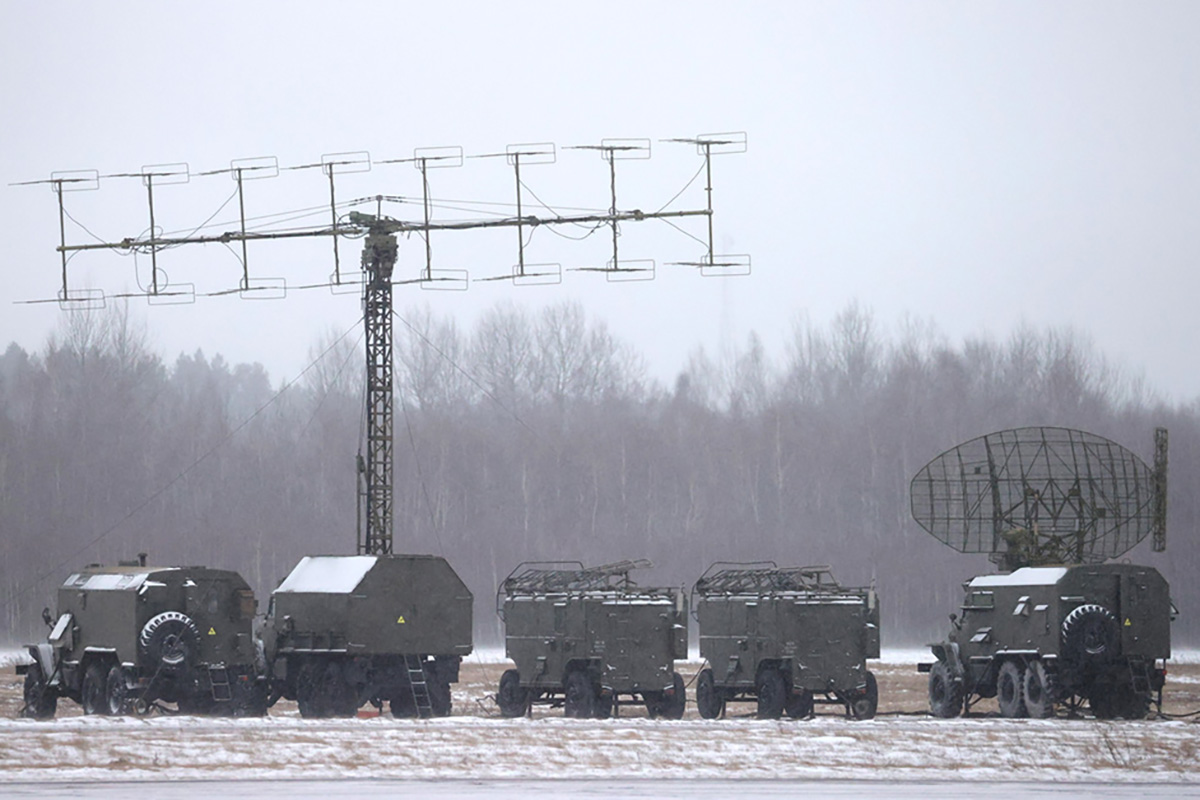 Further steps are up to Belarus. Our country, the Head of State announced, will go to court to be compensated for the damage caused by sanctions against the aviation industry. Now experts are evaluating it. Aleksandr Lukashenko noted,