The Belarusians are proud of their symbols and history, they look into the future, remembering their origins. This is our way, and this is our strength! This was stated by the President Aleksandr Lukashenko at the ceremony to honour the Belarusian national symbols, which took place on Sunday at the State Flag Square in Minsk. 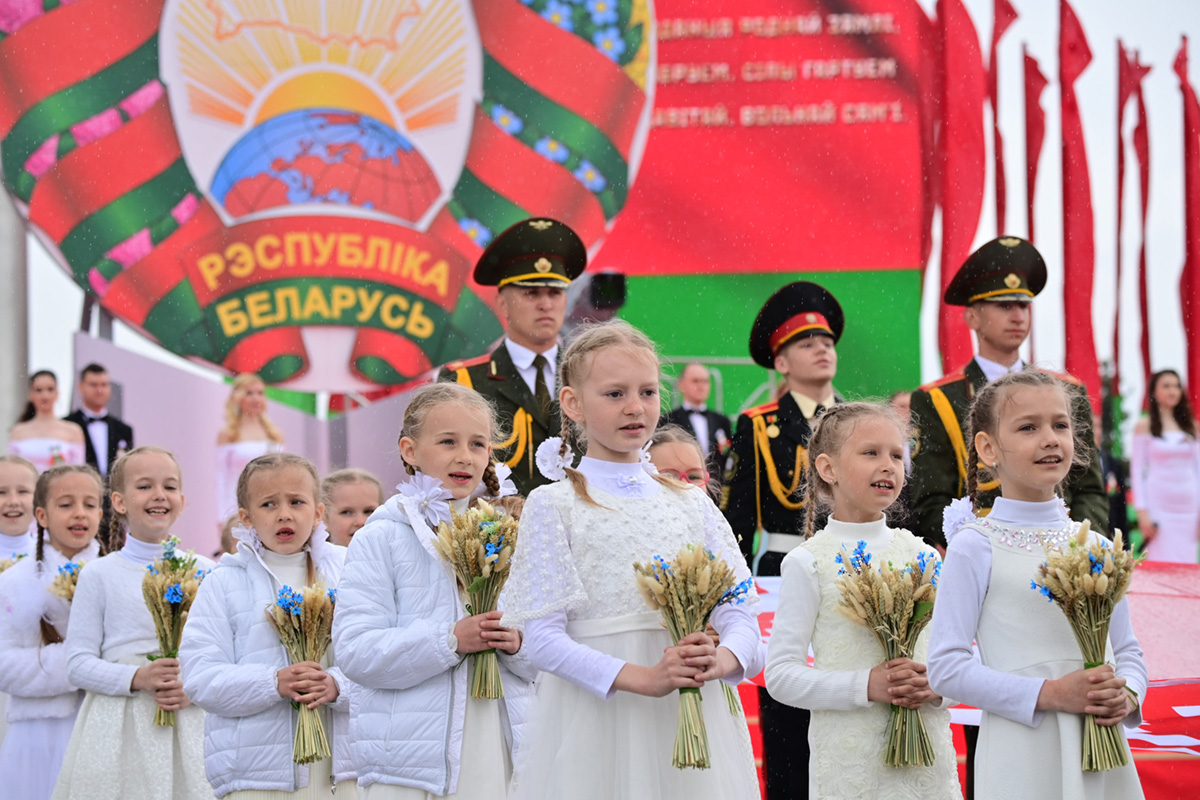 This year, Belarus celebrated National Flag and Emblem Day on the eve of the most important holiday — the Day of the Great Victory. State symbols demonstrate the self-identity and independence of our country in choosing the path of development. They concentrated all the best that the people had in their history. And it was this symbolism that the people accepted at the referendum by an overwhelming majority of votes, the President emphasised,

“Most recently, we adopted a new constitution in a referendum. The emblem and the flag are an integral part of this Constitution... The symbols that represent our sovereignty and national unity are in front of us. These symbols were born in the depths of people’s culture in an era of global upheaval and the breakdown of the world order. Generations of people were born and raised with these symbols, bound by historical memory, which even today, at the most critical times, helps the nation to continue the chosen path, overcome challenges and obstacles.”

Aleksandr Lukashenko recalled that in the 1990s when the Belarusians rejected the attempts to adjust their way of life to the Western European standards, kept true to traditions, preserved the national wealth: domestic enterprises, land, as well as the right to social justice.
The same was in 2020 when we did not let history repeat itself by defending our choice, our values, our flag and anthem, the President emphasised,

“Keep in memory the fact that the state symbols were created by people inspired by lofty ideals, tried and tested in the struggle for freedom, well aware of the value of independence and a clear, peaceful sky. We are reminded of their heroic deeds during the Great Patriotic War by the national flag, the successor to the Victory Banner. The national ornament preserves our ancient cultural traditions… We also remember how our fathers and grandfathers died for their flag, saving it from the Nazis, rose and fearlessly went into battle under it, protecting their families and their native land. In the name of those who paid for the future of sovereign Belarus and its people with their lives, the modern Belarusians, the heirs of the winners, do everything to prevent the crazy heads, struck by the ideas of Nazism, from reviving them on the holy Belarusian land.”

The President added that the current generation of Belarusians, like the previous generations, strive for peace and creation, “We are proud of our symbols and our national history, we look into the future, remembering our origins. This is our way, and this is our strength!”
Aleksandr Lukashenko moved away from the official format of the ceremony and addressed important words to his compatriots, “I know that there are still people (although they are in the minority) who do not understand why Belarus has such national symbols, but not those that we were forced to ban in Belarus by law? For what purpose? Why not the white-red-white flag, as people call it? First, the national symbols should distinguish the state from the other states. They should distinguish us from others. What emblem was suggested? Pagonya (Pursuit). Doesn’t it resemble the emblem of another country? In my opinion, it does! We were recommended a flag. Add one more stripe, and we would borrow the flag of a neighboring country. Didn’t we have our own history? Did we really want to adjust our history and our country to Lithuania or Poland? How relevant it sounds today!

Today they are sharpening knives, swords and sabers in the neighbouring state, dreaming of taking away half of the country as they did before 1939. Maybe they were proposing these symbols for their dreams — the dreams of 2020? But I have already said: in 2020 we once and for all put an aspen cross on the grave of those who wanted to ruin and destroy our country. Thus, our emblem and flag are special and differ from the symbols of other states, including the neighbouring ones.

Symbols are the memory of generations. They should absorb all the best that the people have had in their history. Listen, we kept the red and white colours in our symbols. How many there were: tens, perhaps hundreds of them?
White symbolises the purity of the Belarusian people, which corresponds to our people.
Red is the colour of the people’s struggle for independence, the colour of victory, including that in the Great Patriotic War.
We have added green, which has been a distinctive feature of our symbols in recent years. It is the colour of life, of peacefulness. All our victories are based on our desire to be independent and to work honestly on our land. 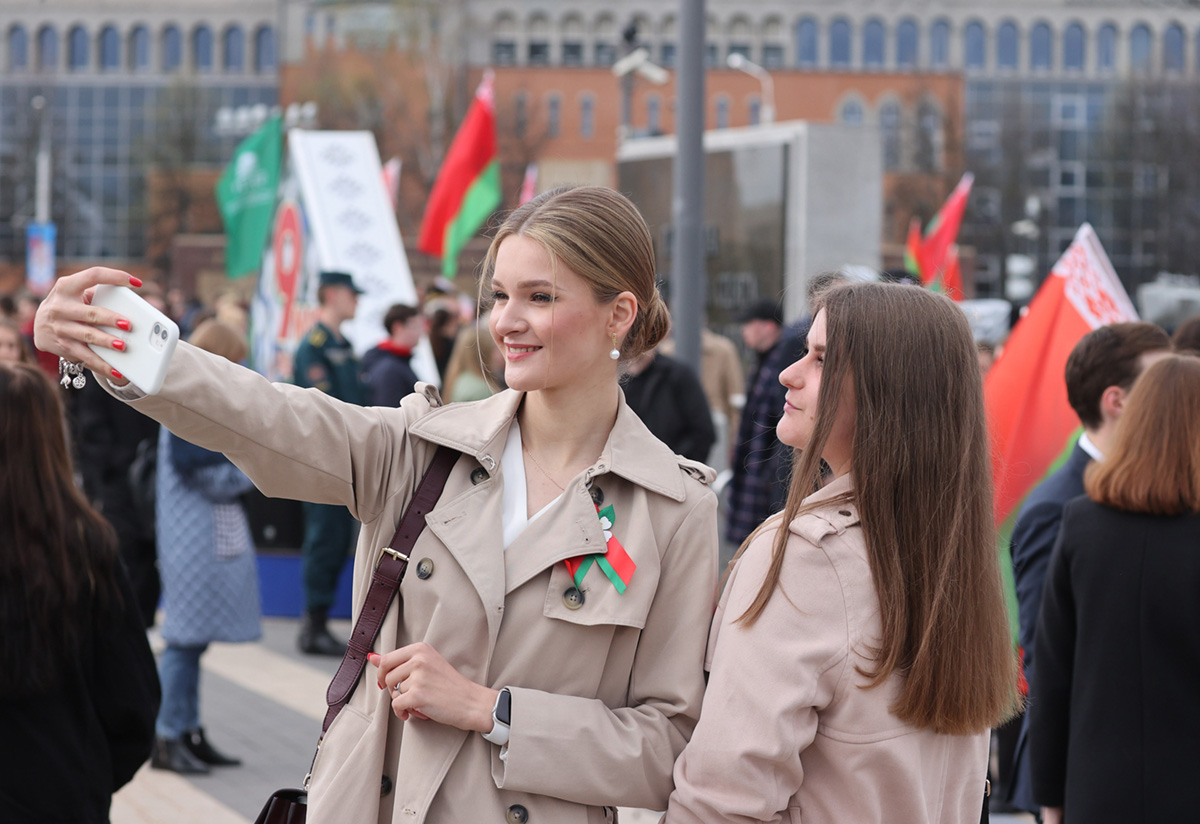 Look at the ornament. These are dreams and aspirations of the people. These are Belarusian traditions. In the past, mothers, relatives and loved ones, giving their daughter in marriage, the most precious person they had, embroidered this ornament on the bride’s clothes. The mother, embroidering the ornament, thought of a better life for her daughter. A better life could not be without a country. Therefore, we have embodied it in our symbols.
So what are we doing here? What are we missing here? This is in favour of the current symbolism.”
The most important thing, according to the President, is that this symbolism was accepted by our people at the referendum,

“The people made their choice and no bunch of offspring of collaborators and traitors can change this decision today.”

Aleksandr Lukashenko is convinced that all of us should worship flag and the emblem, “They are, if you like, the secular icons of the country. Tell me, how could we worship the white-red-white flags and so on? How could we do it, if these flags have the blood of every third Belarusian on them! Those who know it, understand it, have lived through it, are not dead yet. They are alive. How could we go so far as to give our people the right, call upon them to worship those symbols! Those symbols bear the blood of our people, the weeping and moaning of our children, the children of Khatyn, the women and the elderly! The cries of the people of the Minsk Ghetto, the weeping and moaning of the people tortured in the concentration camps. The shame of betrayal and collaborationism. No flag and emblem are to blame for this (we know who is to blame). It was. If someone has forgotten this, outside the format of the current event, I remind you all of this.”
Addressing the younger generation, Aleksandr Lukashenko asked them to never forget this fact, “Forget it — it will be just like in the south of our country, in our brotherly Ukraine. God forbid that we once again, less than a century, less than a hundred years after the terrible war, not our war, which swept back and forth (and how many wars were there!), so that we repeat it in our time!”
During the ceremony, the servicemen of the combined silent drill team brought the State flag to the square. Youth representatives from each region of Belarus and the city of Minsk, on behalf of thousands of their peers, took an oath of allegiance to the State Flag.


On May 14th, 1995, Belarus hosted the first referendum in its history, initiated by the Head of State. Among the questions submitted for the approval of the citizens were the following: ‘Do you support the proposal to establish a new State Flag and State Emblem of the Republic of Belarus?’. 75.1 percent of the citizens who took part in the referendum were in favour of this proposal. The President signed two decrees as a result of the referendum on June 7th, 1995: No. 213 ‘On Approval of the Standard of the State Emblem of the Republic of Belarus and the Regulations on the State Emblem of the Republic of Belarus’ and No. 214 ‘On Approval of the Regulations on the State Flag of the Republic of Belarus’. National Flag and Emblem Day is celebrated on the second Sunday of May.
In 2013, on the eve of the main holiday of the country, the State Flag Square was officially opened. When creating the State Flag Square, architects proposed 26 projects, but it was necessary to choose one. There were many selection criteria, but perhaps the most important was the wind rose. It turned out that there are strong winds at the intersection of two major transport routes of the city — Pobediteley Prospekt and Orlovskaya Street. This allows the flag to fly all year round. Today, the State Flag Square is the venue for major holidays and exciting celebrations. In 2014, a welcoming ceremony was held there for the countries participating in the Ice Hockey World Championship, and in 2019, the fire of the 2nd European Games was lit there. On the square, they swear allegiance to the Motherland and join the ranks of the pioneers, start the working semesters. This is a landmark place in tourist routes.