New Year’s holidays are just around the corner, which means it is time to plan fabulous trips around our blue-eyed country for the whole family 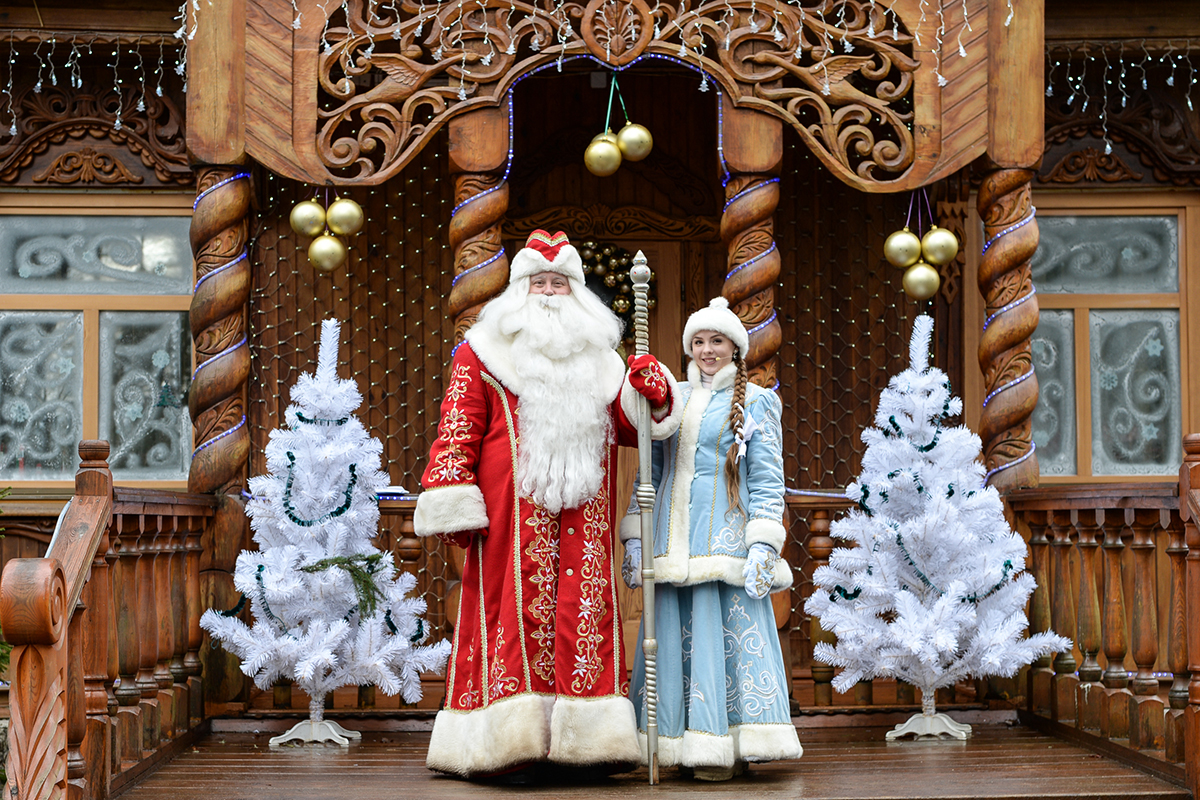 Trying on a general’s coat

Guests are greeted by Father Frost with ... shoulder straps in the Stalin’s Line Historical and Cultural Complex! Army ‘accessories’ decorate the red festive fur coat: astrakhan collar and golden epaulettes. There is a bright star in the centre of the cap. It seems that the stately and stylish wizard has already risen to the rank of general! 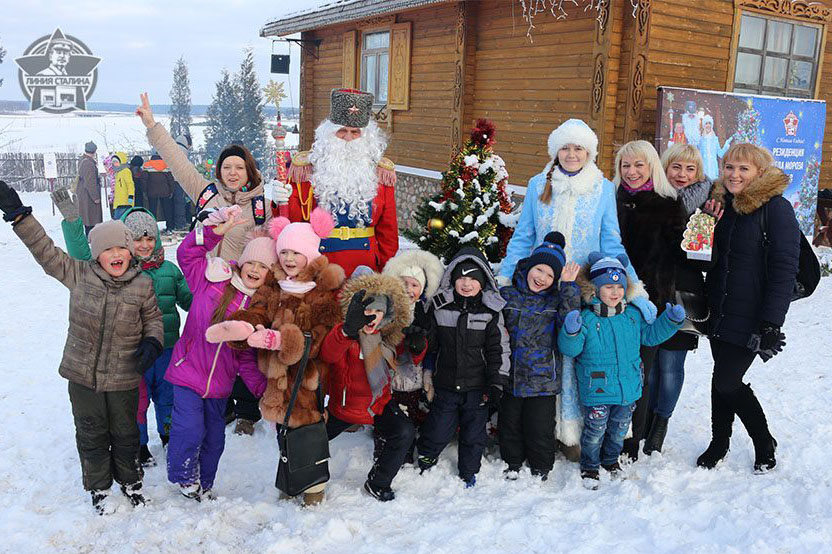 Among the legendary machinery of the Soviet era and modern armoured vehicles, guests practice their agility and accuracy, passing unusual tests. Together with Father Frost they play ‘snow artillery’, ‘funny snowman’ and ‘snowballs’. For the most daring there is riding a T-34 tank with a breeze or shooting from a ‘Maxim’ machine gun. The most active children will receive gifts. This is not only a box with the usual sweets, but also a real army helmet in a khaki colour. They will not let you go without an obligatory ritual: you need to leave a letter with your dreams and wishes in a hefty sleeve. Father Frost and Snow Maiden bury the ‘piggy bank’ under a fluffy Christmas tree until next December.
Where: Stalin’s Line Historical and Cultural Complex, Minsk Region

Children and adults alike had to worry: a vacancy for the country’s chief magician appeared in Belovezhskaya Pushcha in autumn. What if by the holidays they did not find ‘that very’ Father Frost?! They worried in vain. 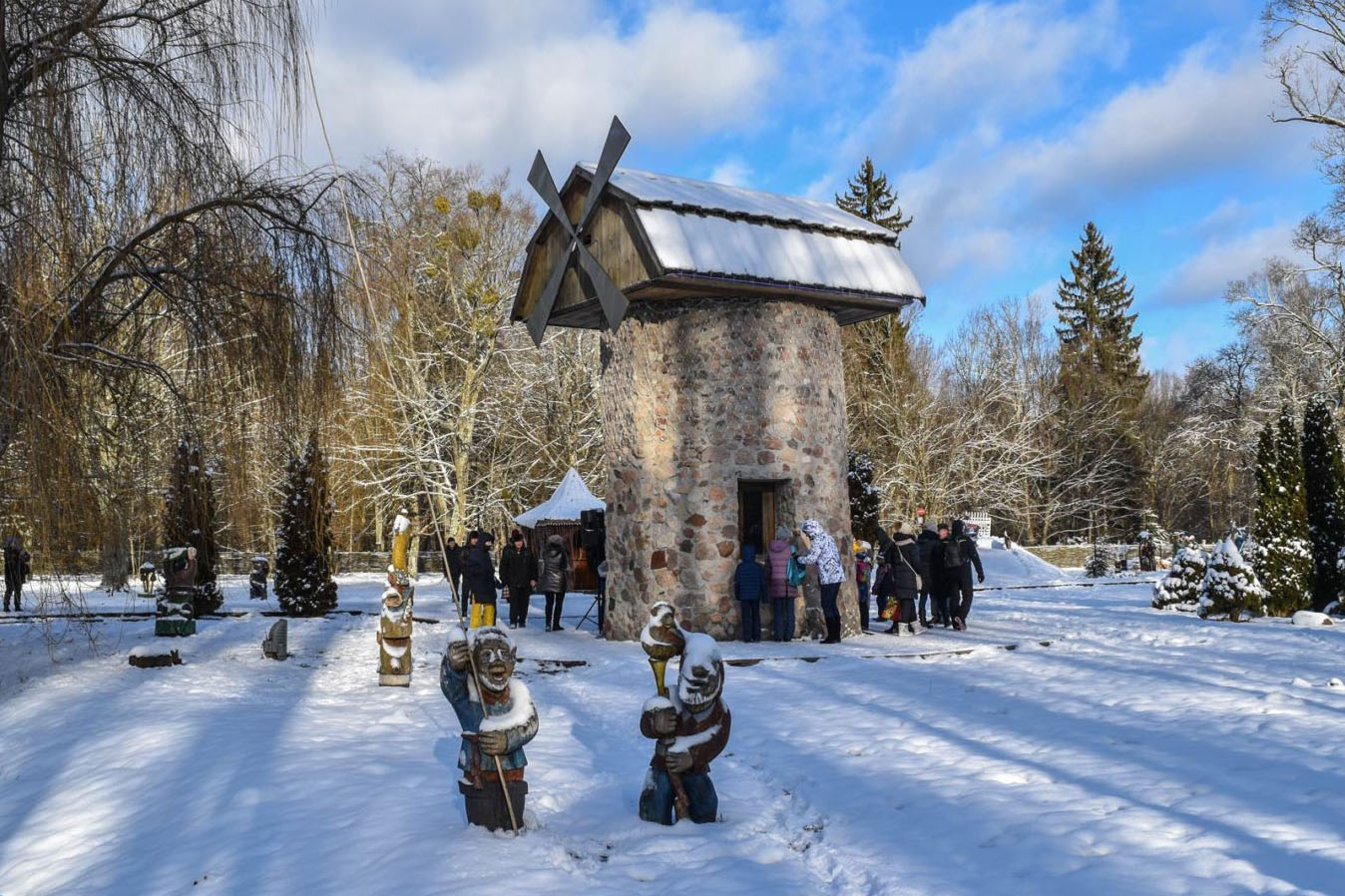 He is already waiting for guests! The New Year’s train from Minsk to Father Frost and Mother Winter first left on December 10th. When visiting the magician, there is lots to see: a two-story carved tower sparkles with bright lights in the evenings, creating a special atmosphere. True, naughty children will not get inside: the entrance to the residence is guarded by wooden knights: Dub-Dubovich and Vyaz-Vyazovich. Another interesting place is the magic mill. Here you can leave all bad deeds from the year and grind them into dust. Meanwhile, you can meet handsome bison in the snowy forest. They are almost tame. After a fascinating excursion, warm yourself with vitamin tea on Pushcha’s herbs and taste fragrant pancakes.
Where: Kamenyuki agro-town, Kamenets District, Brest Region

Being a partisan in the swamps 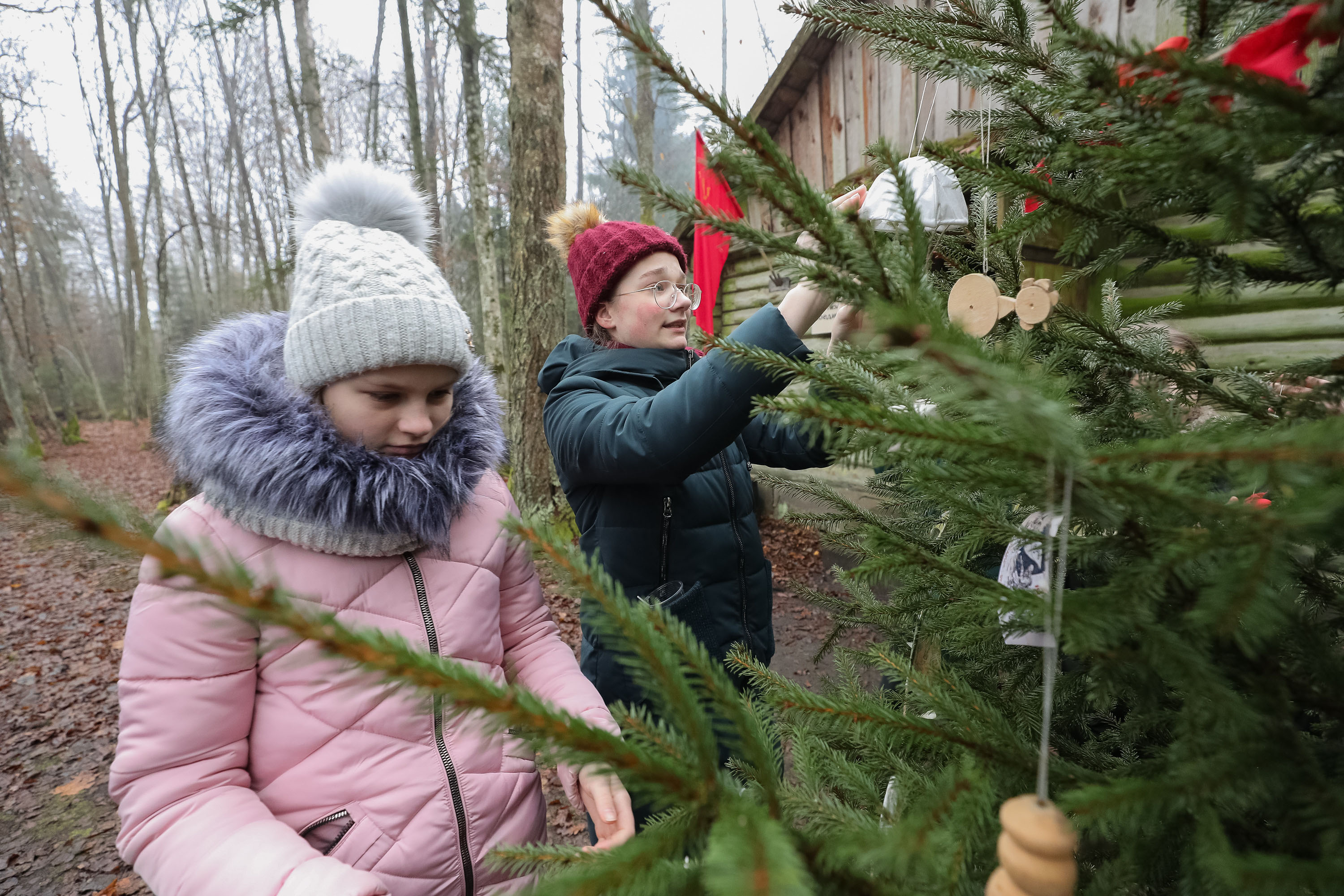 Khovanshchina Memorial Complex
Photo by BELTA
Finding the path to the partisan Father Frost is not easy. We’ll give you a tip: go to the Polesie bogs at the Khovanshchina Memorial Complex. The children there are greeted by a rough Father Frost: in a hat with earflaps, a sheepskin coat belted with a leather belt, a staff in his hands, crowned with a star from a tin can and covered with red bunting. Behind his back he has a cloth bag, but these are not the usual toys and sweets for children, but fragrant gingerbread cookies according to an old ‘partisan’ recipe. They are ‘accompanied’ by exotic tea with marsh herbs from a samovar.
On the forest edge not far from the ‘base’ the Scouting is Looking for a Partisan Father Frost quest is organised. After all the tests, the guests go to the headquarters, where a Christmas tree, round dances and treats await. 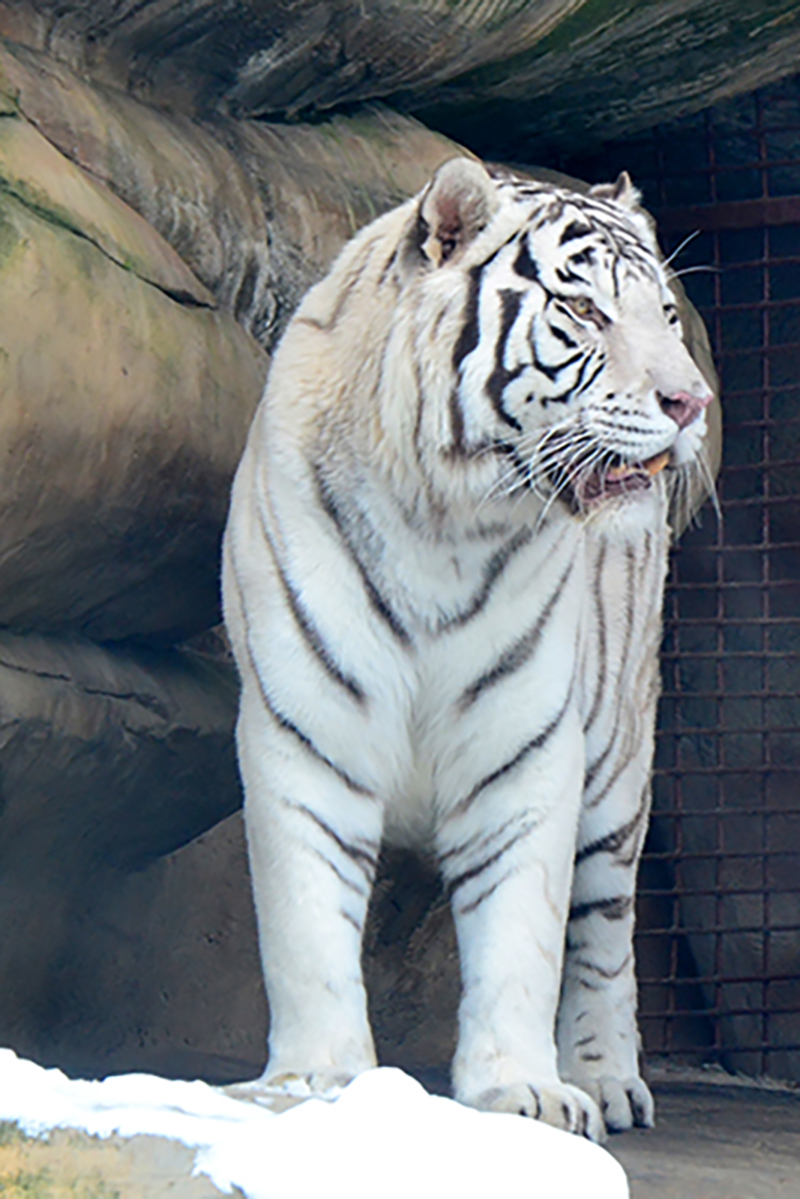 Racing off on a striped voyage

The symbol of the coming year is the tiger. It’s time to visit the graceful striped beast. For almost two years, a predator from Penza, Yaroslav, has been living in the capital’s zoo.
The Amur tigress does not like slush, but she walks in the snow and frolics like a kitten: she playfully throws a pine branch with her paw, then she watches the visitors with interest. Next door is a Bengal tiger named Simon. The fluffy handsome tiger has an unusual colour: snow-white fur with stripes that shimmer from dark brown to black. Of course, you won’t be able to stroke him, but you are welcome to take a picture. The tailed beasts will surely appreciate such attention and will give you success and luck next year. Closer to the holidays, children are invited to the New Year’s performance, entitled How a Bee Decided to Become a Tiger.
Where: Zoo, Minsk, 40 Tashkentskaya Str.


Finding out where the wood spirit walks 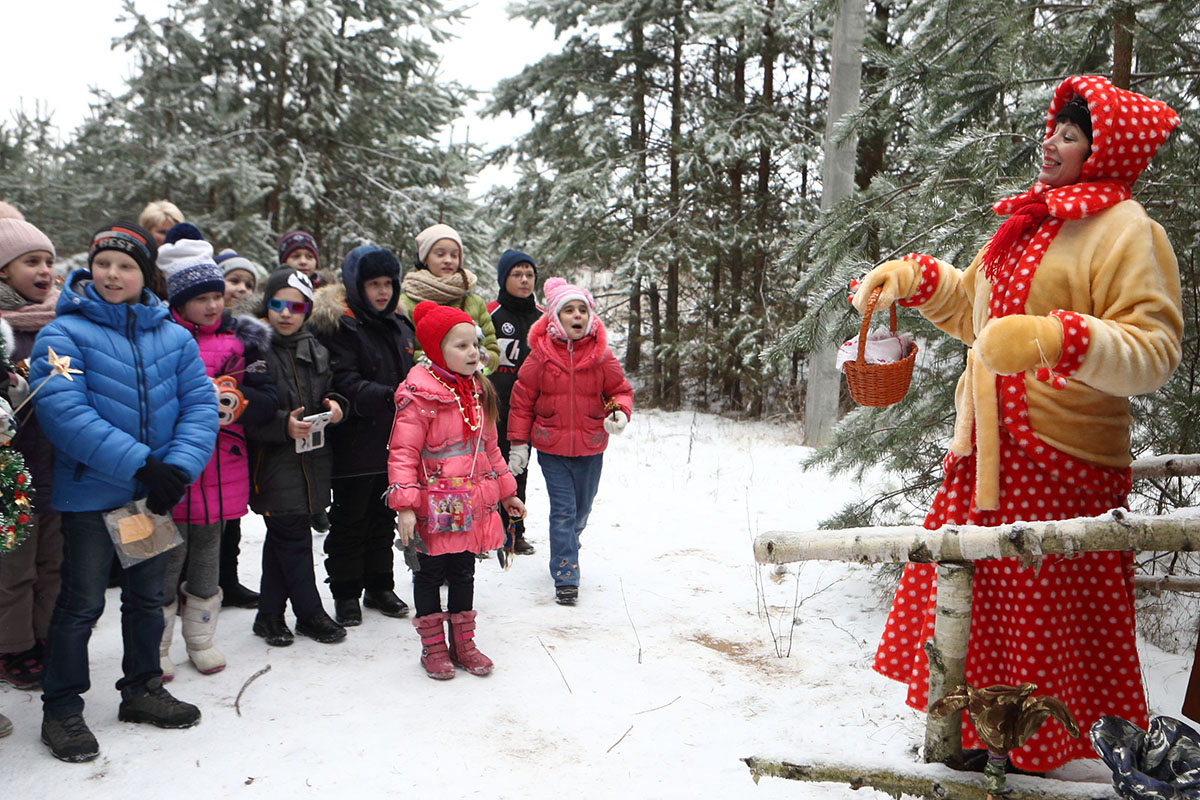 Estate of Zimnik and Baba Zavirukha
Photo by BELTA
Ded Zimnik and Baba Zavirukha are waiting for guests in Nalibokskaya Pushcha, as well as Kikimora, Nightingale the Robber, Baba Yaga, Leshy (wood spirit) and other characters that frighten naughty children. Fairytale characters roam the forest paths, making riddles for visitors and handing out tasks. Here you will not get bored or freeze. The grey-haired Ded Zimnik himself greets the guests in a stylish purple fur coat, high felt boots, and in his hands he holds not a painted staff, but a wooden stick. Every year, a new interactive performance is prepared for young guests here, and after the performance they are treated to hot tea with snacks. After a fabulous show, you can go to Nalibokskaya Pushcha. Such animals as royal deer, roe deer, wolves and bisons are there to amaze you in these wonderful places.