Not just Lenin alone. It is generally accepted that our blue-eyed Belarus is the country with the largest concentration of monuments to Vladimir Ilyich Lenin per square kilometre. However, there are also more original sculptural forms here. 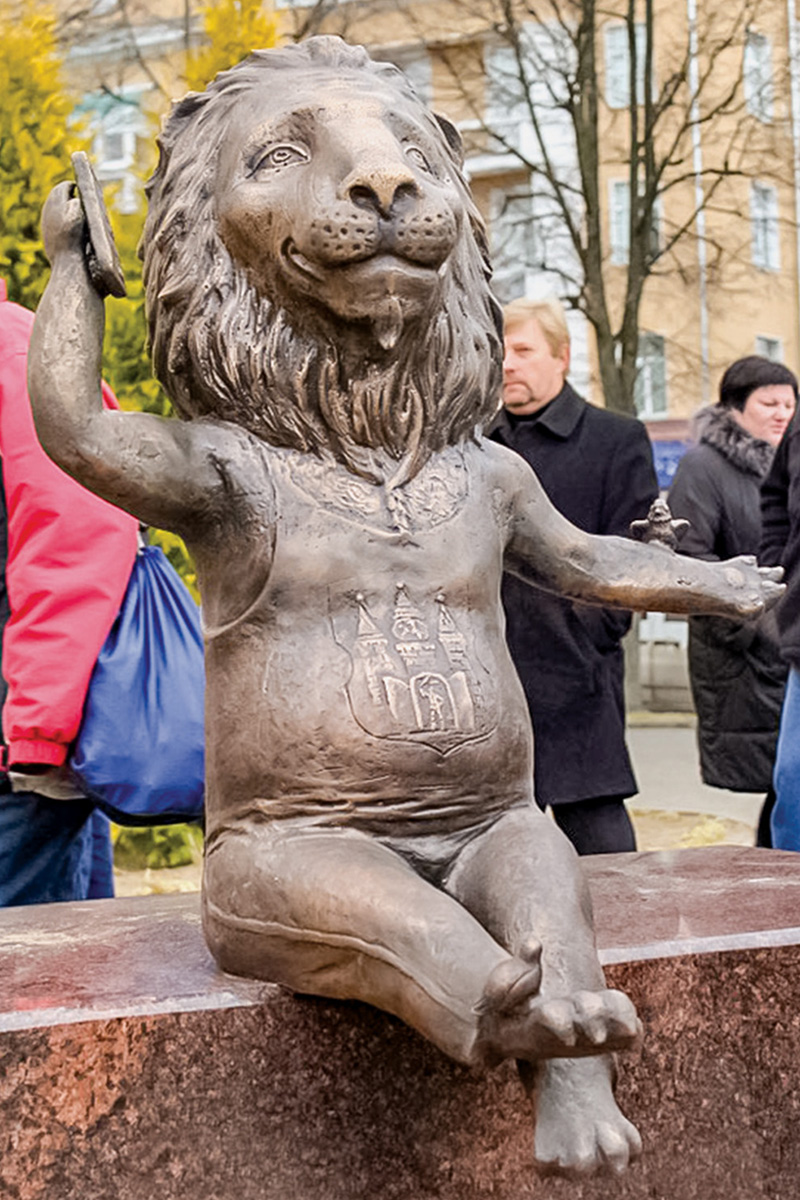 Lion on the line

There is a beaver in Bobruisk, a wolf in Volkovysk and lions in Mogilev. Moreover, there are lions in several bronze variations from one author: sculptor Andrei Vorobyov. These proud ‘kings of the beasts’ adorn the Pushkin Bridge: manes in the wind, their eyes are focused and it seems that they will jump from the high bank into the fast waters of the Dnieper River. In the evening twilight, guests of the city are often horrified by the realism of the frozen predators.
However, in the centre of Mogilev there is a tiny good-natured ‘king’ — relaxed, smiling, open to the world. A thick beard is braided in a pigtail, and he has a cell phone in his hands. “In order to call his relatives in Africa and tell them about the wonderful life in Belarus,” smiles Andrei Vorobyov. 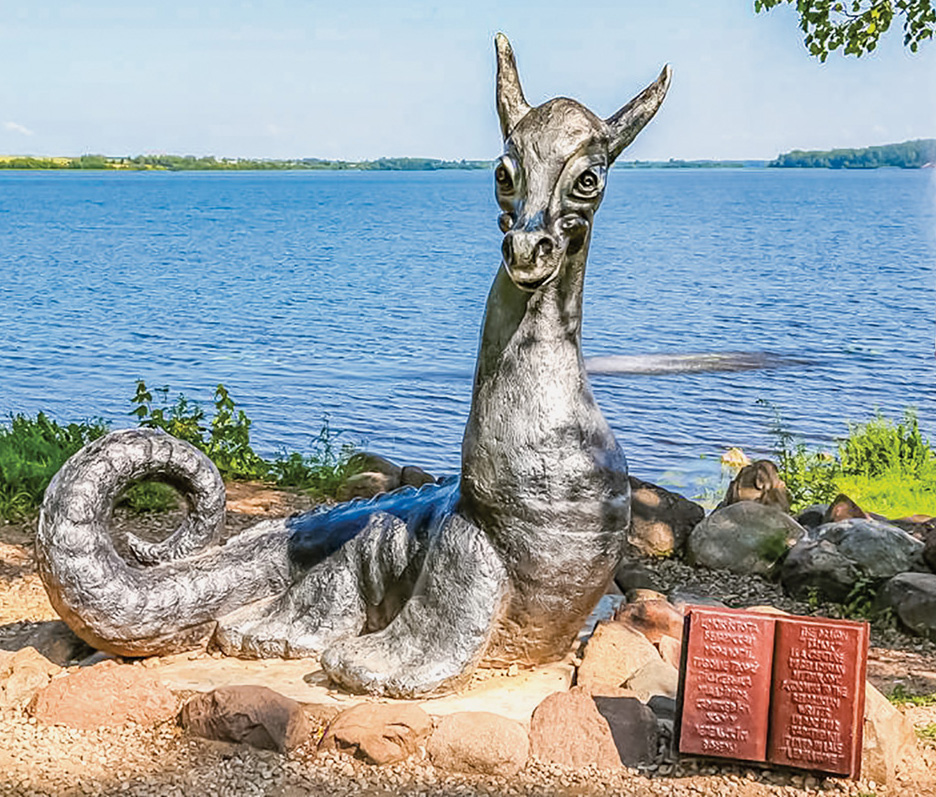 Guest from the past

Dragons have not died out in Belarus. Don’t believe me? You have a direct road to Lepel, where a real ‘Tsmok’ (dragon in Belarusian) lurks on the shore of the lake in the city park. It is bronze, single-headed and not dangerous at all. It was Lepel land that was considered the birthplace of Belarusian dragons thanks to the novel by Vladimir Korotkevich Christ Has Landed in Grodno. The eminent writer, based on legends, not only gave a residence permit to a mythical monster, but also gave an interesting portrait of an animal: grey, glossy, with a thin long neck. ‘…God knows, that head laughed. Maybe it just bared its teeth, or maybe it made fun of our troubles. And the teeth were the size of a horse’s, but sharp, and there were many of them for such a small head, too many.’ 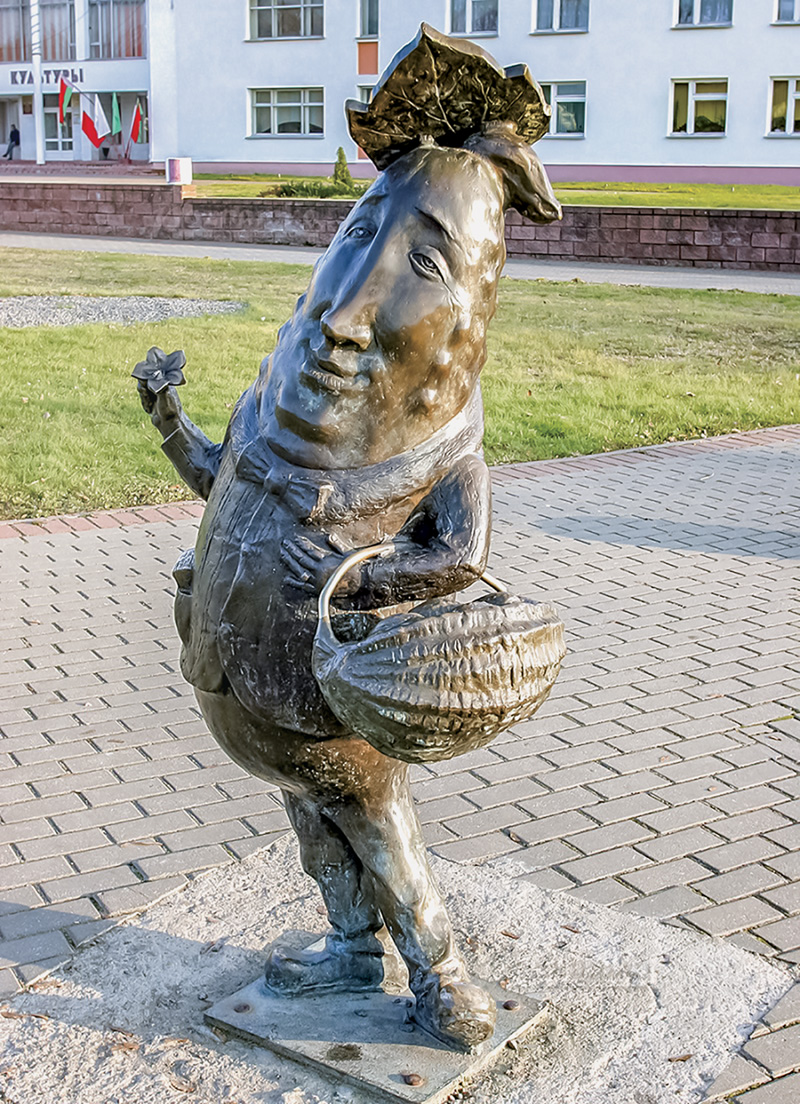 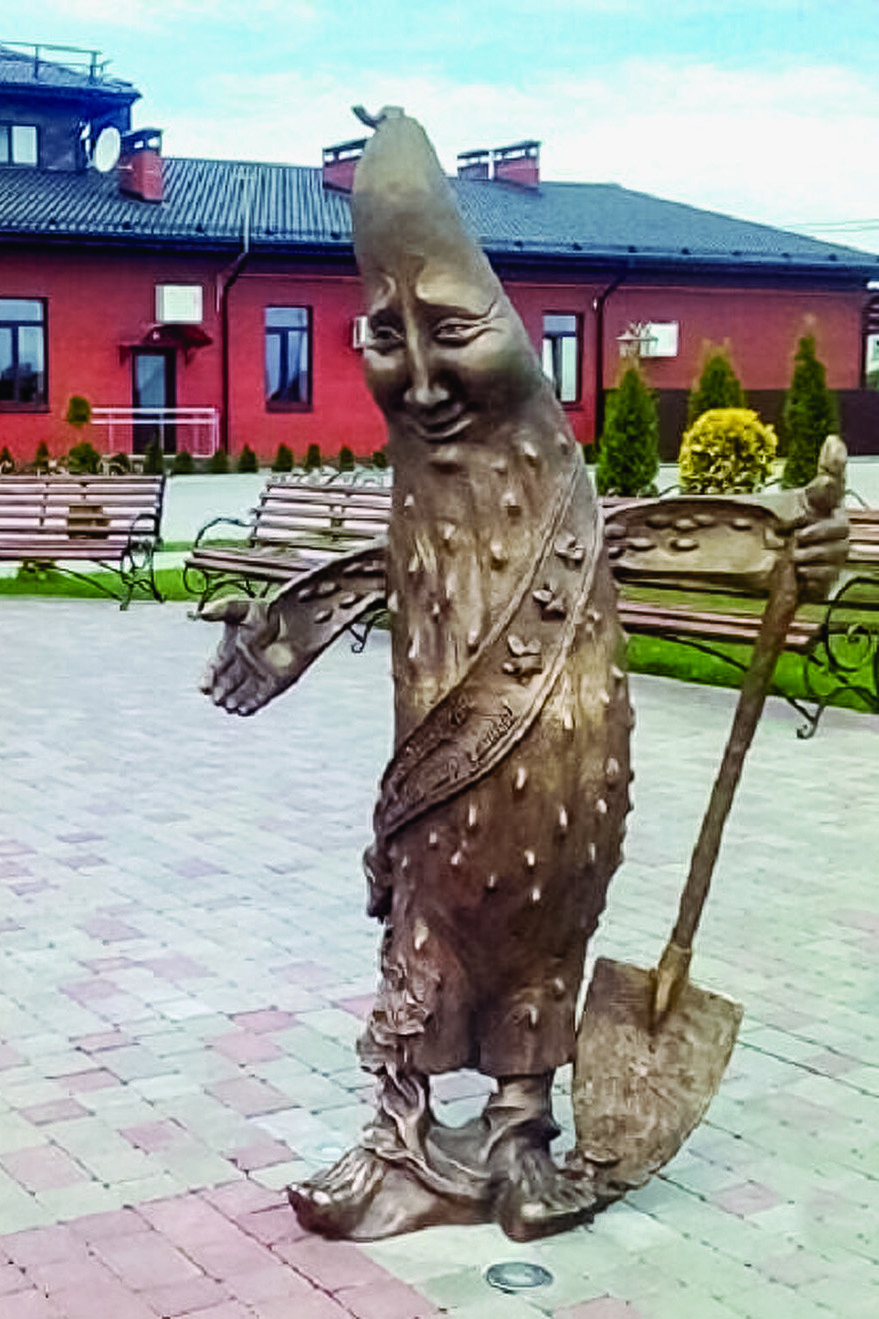 Two Belarusian townships at once claim the title of the cucumber capital: Shklov and Olshany. In the first, the inhabitants rely on history. They say their cucumbers were delivered to the table of Yekaterina II. The residents of Olshany have their own truth: their crispy vegetables are so good that they go in tonnes to Moscow, St. Petersburg and other megacities. In the rivalry for the title of the cucumber capital, monuments to cucumbers were erected in both places. In Shklov, the cucumber is depicted as a real hard worker, having a basket in its hands and boasting a working-romantic attitude. Meanwhile, in Olshany, the cucumber is cunning, inviting others to work in the greenhouses.

The most advanced sculpture in Belarus is the legendary Baba Raya from the Komarovsky market in Minsk. The colourful seed seller loves to be photographed, so she often flashes up on the social networks of Minsk residents and guests of the Belarusian capital. Yes, she herself has an Instagram profile and a whole army of 65,000 subscribers! 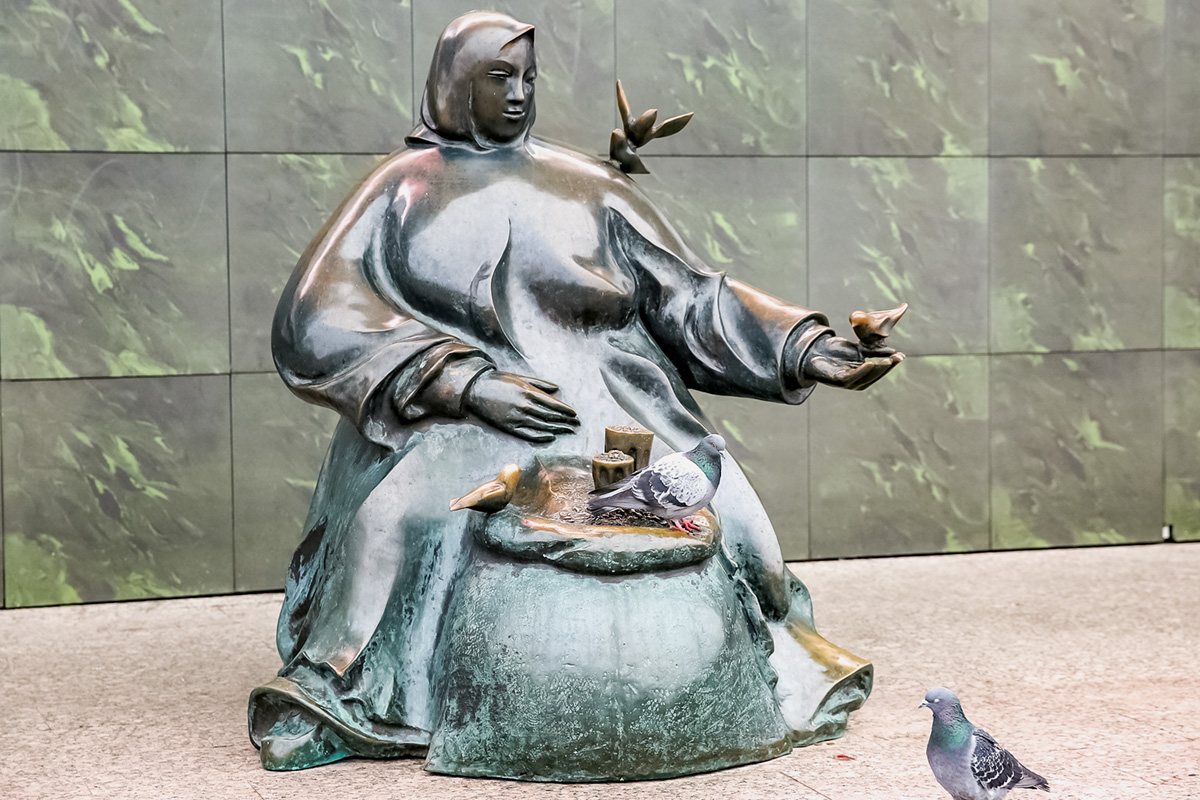 The content of Baba Raya at the Komarovsky market is updated daily. She also gives out advice to guests: where to buy the most delicious bacon, milk and cheese. And a few years ago, a detective story was played out. The scammers hacked into the account and demanded a ransom: Br500,000, threatening to delete all the pictures. Komarovsky market employees tried to resolve the conflict peacefully. They offered to meet with the offenders, set the table for them and thank them for the lesson. But the hackers turned out to be relentless: ransom or death online! As a result, the support service of the social network stood up to protect Baba Raya, and the criminals were left with nothing. 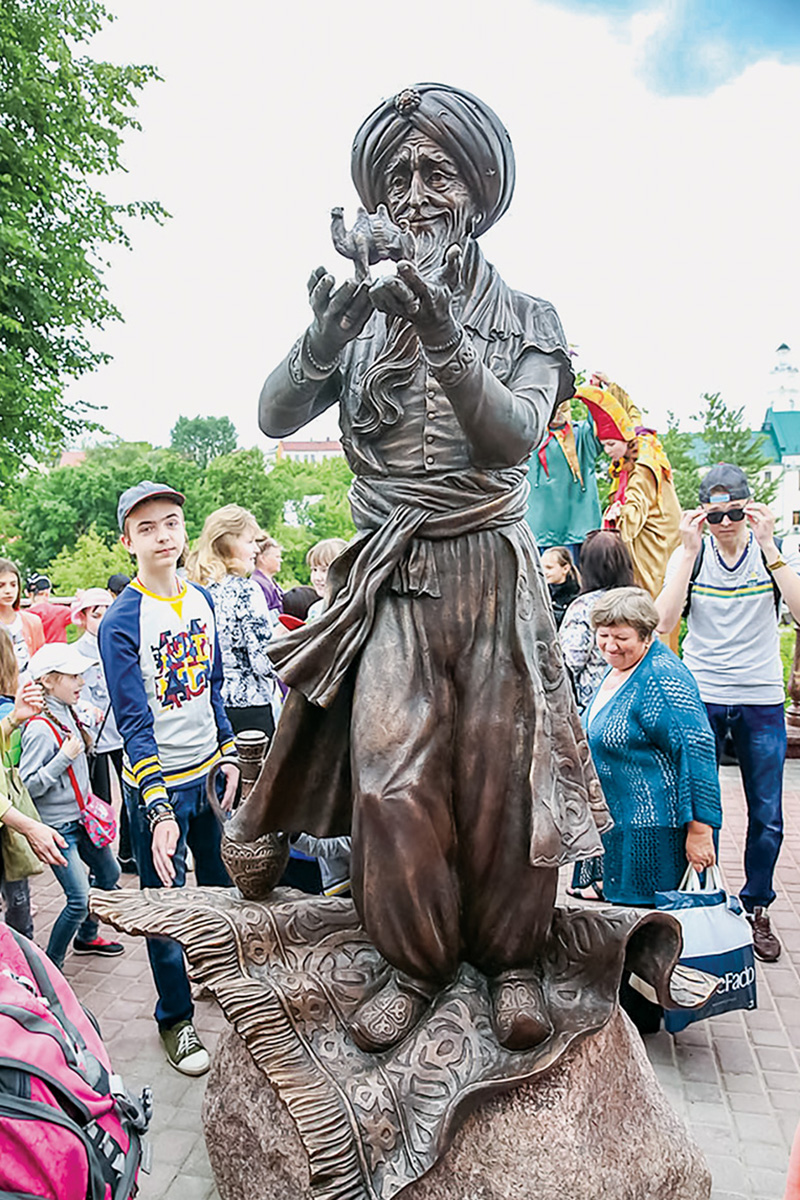 The sudden arrival of a magician

In Vitebsk, one of the most beloved wizards of Soviet children — Hassan Abdurrahman ibn Khottab, aka Old Man Khottabych — is ‘hovering’ on a flying carpet with his bushy beard opposite the entrance to the puppet theatre. The most attentive can find at the feet of the genie, the very copper jug that will help fulfil cherished desires. All you need to do is rub it well.
The legendary old man didn’t appear in the city above the Dvina River by chance. Here, in 1903, Lazar Ginzburg was born — the author of a book about a wizard.