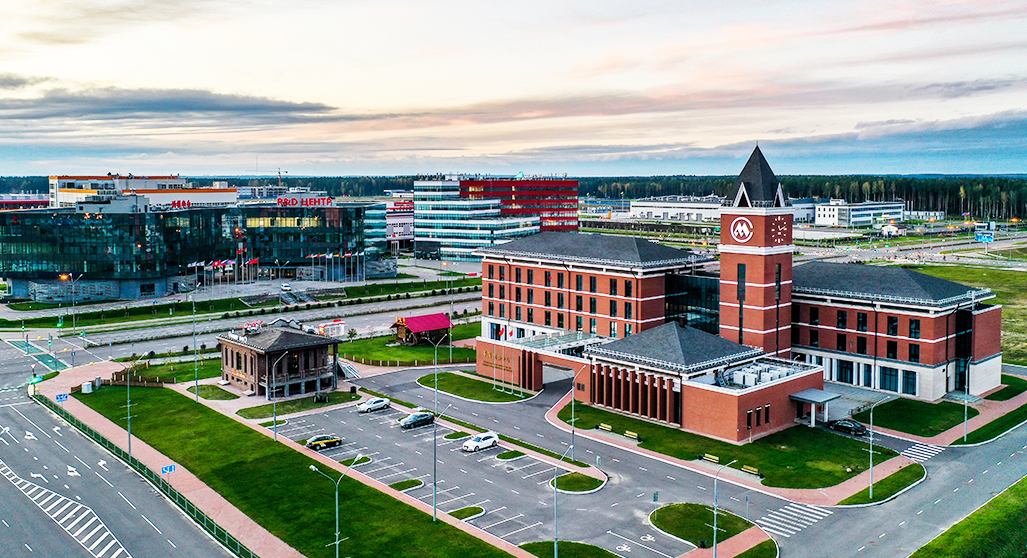 The Great Stone Industrial Park: Best Opportunities for Investment and Co-operation in the EAEU business forum took place in Moscow on the site of the Business and Cultural Complex of the Belarusian Embassy in Russia. The event brought together ambassadors and senior diplomats from nearly 30 countries in Asia, Africa and Latin America, as well as European states.

Opening the forum, the Minister Counsellor of the Belarusian Embassy in Russia, Pavel Lyogky, noted that this is not the first time an event of this kind has been held at the diplomatic mission. In 2019 and 2020, the Great Stone had already presented in Moscow its large-scale potential in terms of development of investment co-operation with foreign regions.
The diplomat stressed that Belarus has built a whole system of support and preferences for investors. The Great Stone occupies a huge area of 112.5sq.km — in fact, a city within a city. It is located 25km from Minsk in close proximity to the international airport, railways and highway. “The Great Stone Park has a special regime for a comfortable business environment,” he said.
According to the Minister Counsellor, any company, regardless of the country of origin of their capital, can launch operations in the industrial park. “Being fully aware of the fierce competition for investors on the world market, the government has created a favourable investment climate for resident companies. This preferential treatment was formalised by national regulations and special international agreements and obligations and provides for unprecedented benefits. The preferential regime of the park is valid until 2062,” he noted.

In June 2021, the President of Belarus, Aleksandr Lukashenko, signed Decree No. 215 to improve the investment climate in the Great Stone Park. The document provides for additional preferences for large projects with investment of $50m or more: an increased grace period for income tax, relaxed customs procedures and reduced price for land plots (by 25 percent) when they are acquired into private ownership. 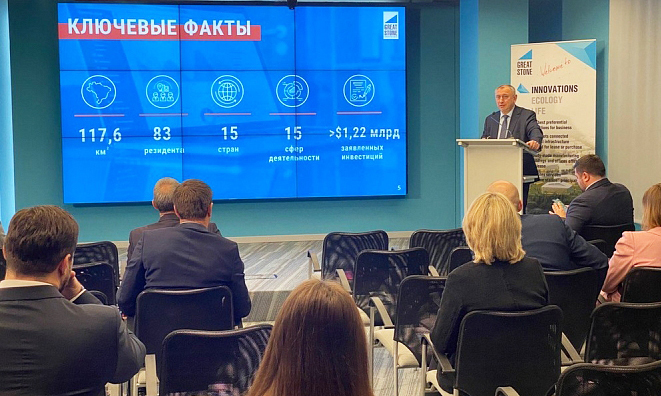 Photo: www.industrialpark.by
“This refers to an unprecedented preferential regime for business,” said Pavel Lyogky. “We know that some countries are wary of investing in Belarus due to the small size of the Belarusian market, as the population of Belarus is 9.3 million. However, the following geopolitical realities should be taken into account. As you know, on November 4th, the presidents of Belarus and Russia signed documents that will become a practical framework for advancing integration in the Union State. These are 28 Union State programmes in various sectors of the economy that aim to gradually remove all existing barriers to access markets and ensure equal rights for business entities of our countries. Thus, closer Belarus-Russia integration guarantees access not only to the Belarusian market but also to the vast Russian market. I will add that goods produced in Belarus will also have free access to the market of the Eurasian Economic Union, with 183 million consumers.”
Head of the Administration of the Great Stone Park, Aleksandr Yaroshenko, told the media that competition for investment should never stop, even amid the current difficult conditions. “We have to be attractive for investors who come to Belarus and who come to the Great Stone Park. A total of 83 resident companies from 15 countries have already joined this project, and we are doing our best to create the most favourable conditions for business,” he said.
Aleksandr Yaroshenko believes that doing business in the park is very profitable for investors. “Firstly, we have great infrastructure, and an investor can come and immediately start implementing projects. We provide industrial complexes where small and medium-sized businesses can install their equipment and launch their production right away. Tax and other preferential policies are among the best in Eurasia, the entire post-Soviet space and the Eastern European region,” explained the Head of the Industrial Park’s Administration.

“Of course, we should keep in mind that the support of this project by the leaders of the two countries — President of Belarus Aleksandr Lukashenko and Chinese President Xi Jinping — is worth a lot. Moreover, this year, the fourth decree of the Belarusian Head of State was adopted to further develop our project, adding new legislative initiatives that enable us, among other things, to provide more comfortable conditions for business in healthcare, which is very important amid the ongoing pandemic,” said Aleksandr Yaroshenko.

The forum presented the potential of the Great Stone Park in the implementation of industrial, innovative, and sci-tech projects in Belarus. The speakers told the representatives of the diplomatic corps in Moscow about the possibilities of interaction with the park, the investment potential of Belarus and the prospects of implementing joint projects with Belarusian companies.