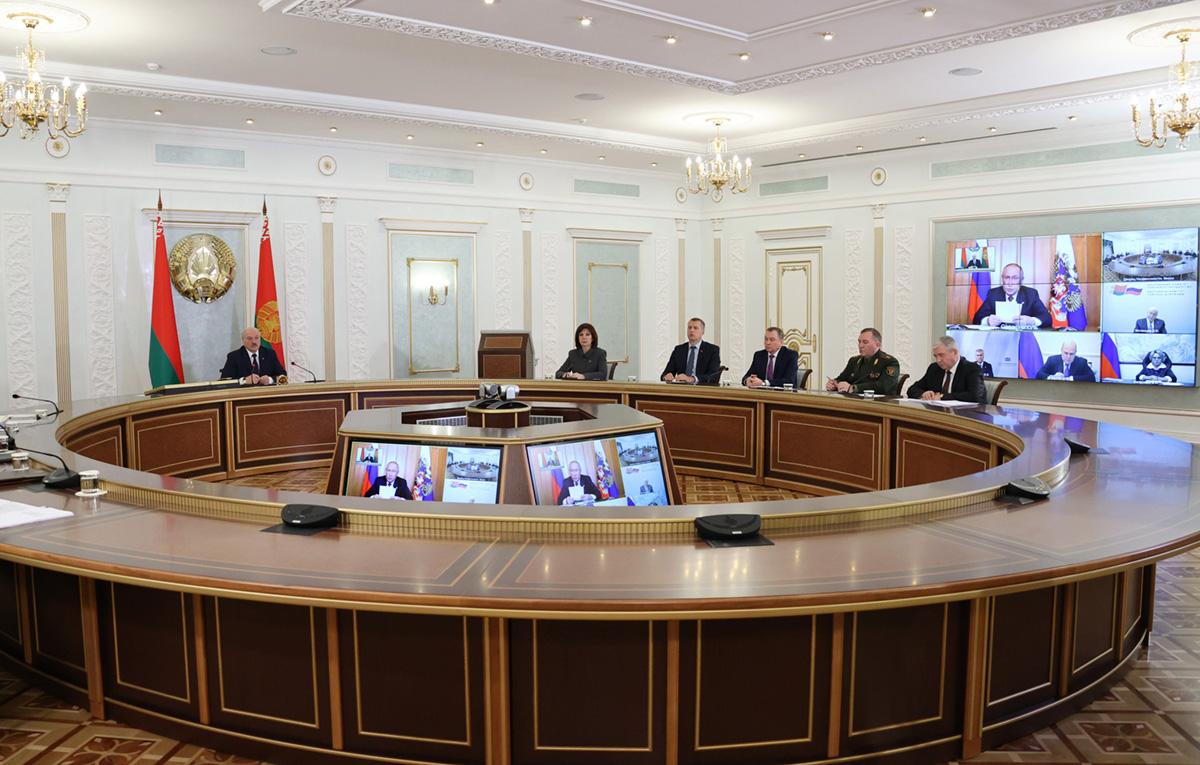 Opening the event, Aleksandr Lukashenko noted that various challenges and threats to Belarus and Russia, multiplied by the ongoing global pandemic, have disrupted the schedule of regular meetings of the two states’ heads.
The President stressed that the Union State is a top priority for Belarus, “We have jointly created a unique integration model, thanks to which the equal rights of Belarusians and Russians are ensured and economic co-operation is strengthening. We are actively liaising in various areas and aim to further expand Union State integration, while protecting the historical and moral values that our brotherly nations share. All of us are more or less aware of the need to continue moving forward on the path of Union State building — thus ensuring protection of interests of Belarus and Russia in the global space.”
In 2019, the leaders of Belarus and Russia set a task for the governments to assess the results of Union State integration and determine further steps for its enhancement. Draft Guidelines to Implement the Union State Treaty in 2021-2023 have been developed as a result. After their approval by the Supreme State Council, the governments will further need to take measures to implement a range of conceptual solutions within two years. “In fact, we are about to reset our joint economic space. It envisages the introduction of modern technologies, styles and methods of decision-making,” Aleksandr Lukashenko said. According to the President of Belarus, the formation of a qualitatively new environment for trade of goods and services, the creation of joint industry markets, implementation of unified financial, tax, credit, industrial and other policies will be the result of this work.
The President of Russia stressed that Belarus is not just a good neighbour and closest ally for Russia. “This is a truly fraternal republic, our fraternal people. We strive to do everything so that it will always be so,” he said.
The President of Russia recalled the proposal made by Belarus on the possible inclusion of a Belarusian cosmonaut in the International Space Station crew, “We are ready to support this proposal and implement it in the near future.”
At the meeting, Aleksandr Lukashenko signed the ordinance of the Supreme State Council: ‘On Guidelines to Implement the Union State Treaty in 2021-2023’. Since the event was held via videoconference, the document had been previously signed by the President of Russia.
There were six issues on the agenda, of which the Guidelines to Implement the Union State Treaty in 2021-2023 were key. These are actually a list of areas of integration with the assignment of responsible officials. A package of 28 Union State programmes has been prepared to develop the areas outlined in the project. They determine a trajectory of joint work in almost all areas of joint activity — industry, energy, finance and the agro-industrial complex. It also envisages the convergence of approaches in the field of macroeconomics, tax and customs regulation and monetary policy in general. In addition, the Union State programmes relate to the transport market, labelling of goods, payment systems, veterinary and phytosanitary control, consumer protection and the unification of legislation in the social and labour sphere.
Trade and economic collaboration between Belarus and Russia was discussed in detail at the meeting. Despite the pandemic, it is successfully developing and mutual trade turnover is growing.
The presidents approved the Military Doctrine of the Union State, which is very relevant in connection with the situation on our western borders. The concept of the Union State’s migration policy was also the focus of attention.
Following the results of the meeting, a decision was made to award the Union State prize in science and technology in 2021 to Russian and Belarusian scientists and specialists for outstanding results in the joint scientific research and development of samples of new equipment and advanced technologies.

After the Supreme State Council meeting, Aleksandr Lukashenko and Vladimir Putin talked on the phone for another hour and a half. On the whole, the presidents talked to each other three times that day.
Before the meeting, they discussed a number of matters and problems relating to Union State construction over the phone. Vladimir Putin informed his Belarusian counterpart about the overall situation in Crimea.
Then the Supreme State Council meeting was held — as planned.
Afterwards they continued discussing topical items on the international agenda and the domestic one over the phone. They spoke at length about the situation at the Polish border.