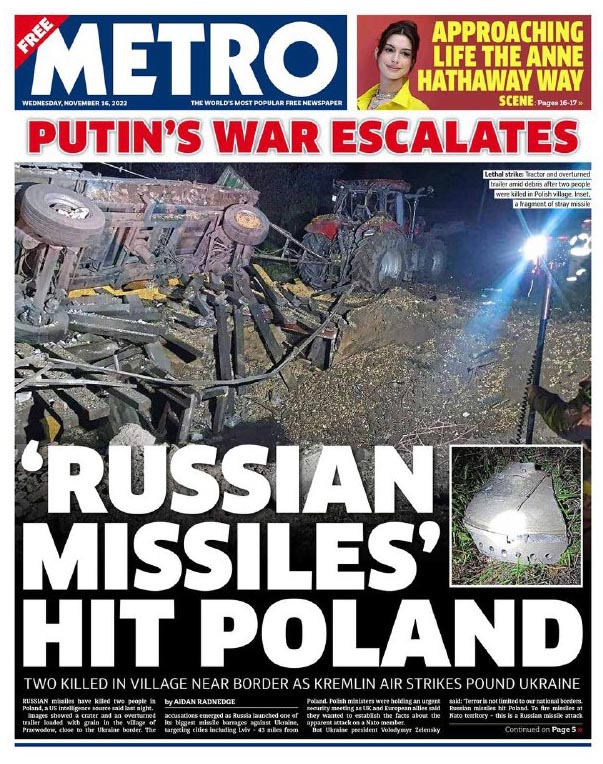 On the evening of November 15th, the Polish authorities announced that a missile had fallen on the territory of the country, killing two people in the Polish town of Przewodów. The Polish Foreign Ministry immediately blamed Russia for the incident. Moscow called such statements a provocation. NATO countries at first doubted Russia’s involvement, but later even stated that the missile was Ukrainian.
When reports that a missile had hit Polish territory were first announced, Ukrainian President Volodymyr Zelenskyy called it an ‘escalation’ by Russia while Polish officials spoke of invoking Articles 4 and 5 of the NATO treaty, framing the event as a threat to the security of the alliance.
The Western tabloids immediately picked up the hysteria. The most ‘successful’ in this regard were the British media whose front pages burst into apocalyptic headlines that ‘Russian missile strikes Poland’, ‘Russian bombs hit Poland’, etc.
At the same time, none of them, anywhere, said a word about the statements of Joe Biden and Recep Tayyip Erdoğan, which made it clear that one should not rush to conclusions. 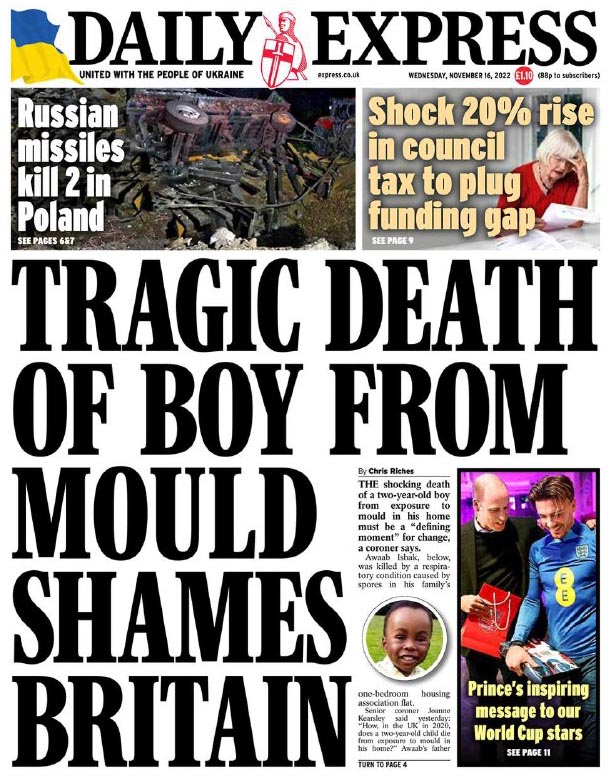 Once the true origins of the ‘attack’ were understood, Western officials were quick to absolve Ukraine of any responsibility for the tragedy, noting that Ukraine had fired the errant missile to defend itself against Russian missile strikes on critical infrastructure.
Ukraine, however, has been reluctant to accept this conclusion. “I have no doubt that it was not our rocket,” Ukrainian President Volodymyr Zelenskyy has since said. Ukraine has indicated that it wants to be closely involved in the investigation.
This kind of rhetoric is beginning to exhaust the patience of some Western diplomats. They fear that Kiev’s at times maximalist language and demands risk adding to so-called ‘Ukraine fatigue’ among allies. For example, according to a publication in the Financial Times, there is a growing level of dissatisfaction in NATO with the actions of Ukrainian President Zelenskyy because of the missile incident in Poland. 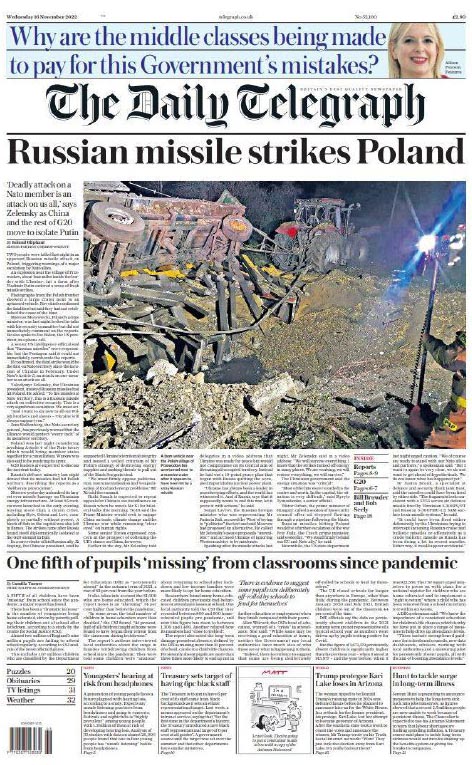 The journalists stress that Zelenskyy’s firm desire to convince the world community that Ukraine was not involved in the fall of missiles in Przewodów despite the evidence, is beginning to irritate NATO.
Responding to Zelenskyy’s comments, a diplomat from a NATO country in Kiev told the Financial Times, “This is getting ridiculous. The Ukrainians are destroying [our] confidence in them. Nobody is blaming Ukraine and they are openly lying. This is more destructive than the missile.”
Meanwhile, the host of the US programme The Benny Show on Newsmax TV channel Benny Johnson accused the Kiev authorities of trying to unleash a WWIII. “Ukraine was trying to unleash a third world war when a Ukrainian missile hit a NATO country and killed innocent people. Ukrainian leaders lied and blamed Russia. The AP has unquestioningly stated this. Ukraine’s leaders lied while trying to start a full-blown World War III,” he wrote on this twitter page.

Based on the materials of www.bbc.com, www.ft.com and www.politico.eu