According to Vladimir Putin, the leaders of Belarus and Russia scheduled this meeting at the SCO summit in Samarkand. At first, the heads of state planned to discuss the bilateral agenda right at the summit, but in the end it was decided to hold a separate meeting.
“I am very glad that you found time to come and talk. There are a lot of issues we need to discuss. They concern the situation in the region; the economic issues that we discussed earlier are no less important and have to do with the chemical industry, food and fertilisers,” emphasised the President of Russia. Vladimir Putin noted that the West is still blocking the supply of Belarusian fertilisers to the global market.
“It is very strange, because the global market, developing countries, are in dire need of these products. We have specific plans across a number of areas, a number of major projects. The government has completed, by and large, the preparation of these projects. We will discuss all this,” stressed the Head of the Russian State.
Aleksandr Lukashenko emphasised, “We talk a lot about our plans, our prospects. I have analysed all the instructions that you gave to the government, and the way Belarus held its end of the deal.

We have practically no failures. The development of our economies and the overall existence of our states changed dramatically over the past three months. We were predicted to collapse, fall, and so on. Yet, life is full of opportunities: we need someone, someone needs us. And we found partners to successfully co-operate with and develop our economies.”

The Head of the Belarusian State believes that people who support their country during this period deserve special appreciation.
“It’s a difficult period. The world has turned upside down. People understand it. There are all sorts of people, here and there. We see them. Maybe it is a blessing in disguise. What is happening is a certain watershed (we had it in Belarus in 2020 and Russia is having it now). It shows who is who. There’s nothing wrong with that,” noted
Aleksandr Lukashenko. And added, “We have changed significantly over these three months. We have realised that we can live normally. You have formulated these points of our agreements very correctly. We are doing well with import substitution. We will fly on our own aircraft, both military and civil aircraft (actually, we are already using our military aircraft). And we will drive our cars. There is no fear.”
The Head of the Belarusian State is convinced that Belarus and Russia have chosen the right course, “They will buy foodstuffs, fertilisers. They are buying them now. It is more difficult, of course. They are not blocking us, but people who want to buy, who want to pay. They are blocking them, not us. But we find ways to sell. Prices have skyrocketed. We have not inflated them, you are right. Who needs it? I have just watched morning news — all of Europe is boiling. The richest Germany — everyone is on the street, everyone is protesting. But someday they will hear it. I think they will. Therefore, our course is right, our cause is just. We will win. We have no other choice.”
Aleksandr Lukashenko once again expressed his conviction that the development of Europe is closely connected with co-operation with Belarus and Russia, “If Europe finished seething, it must pause and think (I am not speaking about those across the ocean). I have already told Europeans three times that their future is with us, with Russia, which has everything they need. In turn, they produce what we might need. What else do they need? It is just that they need to make responsible decisions. If they do not want it, so be it.”
“They must treat us with respect,” Vladimir Putin noted.
The Belarusian leader emphasised, “Otherwise, we, Slavs, will not bother to talk to them at all. No one will tolerate being looked down upon. Neither Belarus nor Russia, a giant country, what kind of humiliation can there be? We remember the U.S. policy under the previous president. They declared themselves ‘exceptional, crowned, rulers of the world’. They continue with this policy today. You cannot treat others like that. We are open to everyone who wants to live in peace with us and respect us. So are you. You are even more open. You talk about it all the time. We are ready for that. No one, however, will tolerate being looked down upon. Russian people have never tolerated it. No one, not a single Russian person, will allow any president, including President Putin, to digress from this policy. This is what our economy and politics are about. We have stated it more than once, and we will continue with this policy.”
During the talks in Sochi, the President of Belarus commented on the mobilisation in Russia.
“They are spinning mobilisation scare stories in Belarus. Some people have fled Russia. Listen, Russia has a 25-million strong mobilisation resource. Okay, let’s say 30,000 or even 50,000 people have fled the country. Imagine they had stayed here… They are not the people to rely on, are they? Let them flee. I don’t know how you feel about it, but I wasn’t particularly worried when several thousands left Belarus in 2020,” stated Aleksandr Lukashenko.
Now, according to the President, most of the Belarusians who left then are asking to come back.
“Those who have fled Russia will be coming back too. You just need to decide what to do with them: either let them come or let them stay there. What they have done is wrong. It is possible, after all, to reach an agreement here and not to run around Europe and America, as it was during the Bolshevik Revolution and after it. The situation is not the same,” emphasised the Head of the Belarusian State.

The President of Belarus, Aleksandr Lukashenko,visited historical sites on the north-eastern coast of the Black Sea on September 28th, BelTA reports
A meeting on the Abkhazian land was also held. The Belarusian leader discussed economic projects and promising issues of co-operation between Belarus and Abkhazia with Aslan Bzhania. 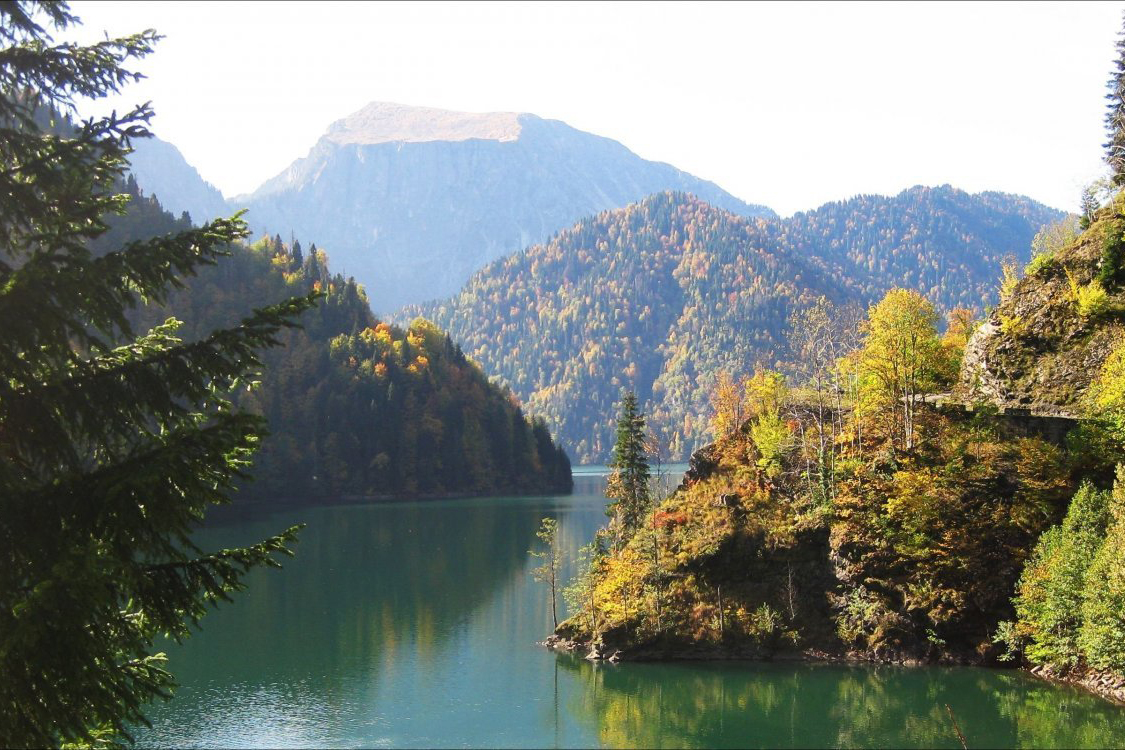 
Aleksandr Lukashenko noted that, the day before, he had discussed the problems of Abkhazia with Russian President Vladimir Putin. “We discussed these issues a lot, until the night. He is very involved, more than me, in the problems and affairs of Abkhazia. I will not talk about it for a long time, but we came to one conclusion: Abkhazia exists, it cannot be erased from the map, and no sanctions will be able to do it. Abkhazia, as he says, should not be abandoned. Assistance should be rendered to it — so that this flourishing land and its people live normally,” the Belarusian leader said.
Aleksandr Lukashenko stressed that he had come not because of ‘a certain situation’. “We have a normal situation. We do not suffer from any geopolitics. We just want, like you — a peaceful, kind and hardworking nation — to live in harmony,” he noted.
According to the President, the economy, trade and economic ties should become the foundation of relations. “We have come with good intent. If we can help you in any way — moreover, this will be mutually beneficial co-operation — then we will do it. Let’s talk and think about how we will live further. As you know, I am already an experienced person — in politics and in other spheres. The main thing is to ensure that people live here with dignity, because this paradise corner of our earth is worthy of it. People here are saints, and I am not flattering you: saints! I remember this from Soviet times when I came here. Therefore, we want to establish not just a friendship bridge, but our very serious relations,” Aleksandr Lukashenko stressed.