The President of Belarus held a meeting of the Council of Ministers on the functioning of the economy under sanctions and measures to overcome them. The event was business-like and large-scale: the discussion lasted over three and a half hours. 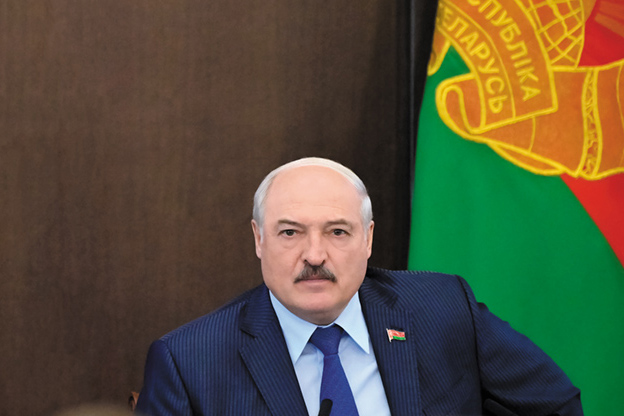 The main goal of this year is to keep the positions we have. The President drew special attention of the participants of the meeting to this issue,
“I understand the situation, I understand it very well… I go to places, talk to people, I have information from at least a dozen sources, except for the media, I understand the situation we are in. Therefore, the task was brought to both the Prime Minister and the Government one: we must not work worse than last year.”
The Head of State explained very clearly why the economy is the number one issue, “If we do not want to fight (everyone has children), if you do not want our children to defend their sovereignty and independence with a gun, we must have a strong economy. This is the stability of our society. If you want to fight, please do. It all comes very quickly.”
Aleksandr Lukashenko noted that everything always starts small, with conflicts, “Someone is poorer, someone is richer, they looked at each other, then they began to envy each other... Then they took up a rifle, a gun and began to fight each other.”
The President recalled the experience of the events of 2020, “It was still a mini-conflict, it will be worse. And then they will help us. We’ll be set on fire quickly. Whole. And it will be worse than in Ukraine.”

The Head of State instructed to strengthen cooperation primarily with the Russian Federation. He, in particular, focused on the scientific and technical programmes of the Union State, noting that there should be no pettiness.
“It is necessary to eliminate as much as possible barriers with Russian partners on commodity items restricted for import into Russia. This is also a topic for discussion for me,” instructed the Head of State. 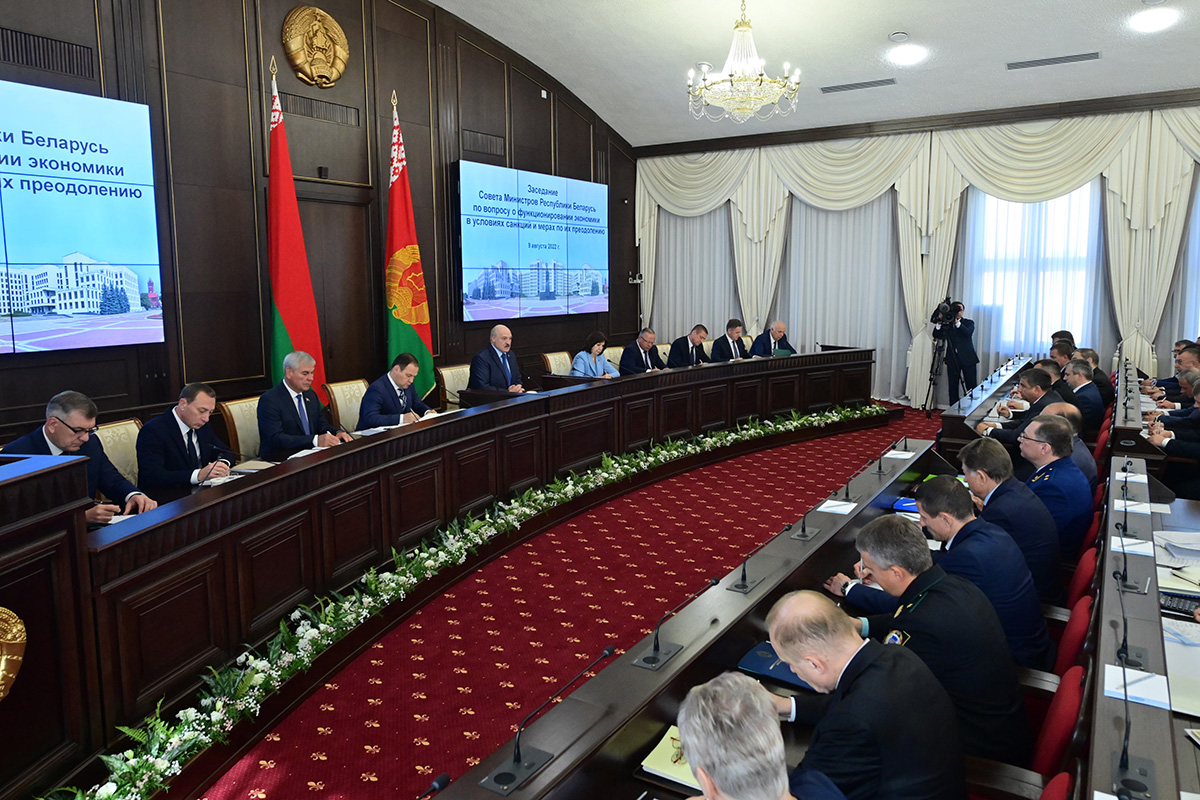 Aleksandr Lukashenko instructed to work out the creation of Belarusian unified machine-building centres with service functions in large administrative-territorial units of Russia, “It is not necessary for every enterprise, especially in industry, to create some kind of centre. We need to create common centres.”

The President demanded to speed up the implementation of import substitution plans, “It is necessary to bring the task to anyone possible: produce a part or spare parts, and deliver them.”
The issues on the creation of software for a particular product lie in the same plane. Here you can not only use the HTP, but there are also good specialists in the IT field at a number of enterprises who are able to create the necessary software product, to which the Belarusian leader drew attention.
Import substitution also applies to other orders: from more active development of mineral deposits to the cultivation of certain crops in agriculture. For example, Aleksandr Lukashenko drew attention to sunflower oil. Russia can also supply it, but the President instructed to work out the feasibility of expanding sunflower crops in the southern regions of Belarus,
“Listen, what is the difference between your climate and Ukraine? Well, let’s try. I will try it on my experimental field. I have already ordered: lupine, peas, soybeans (let’s look at these fields in the Senno District, Beshenkovichi, these fields are even further north), sunflower, rapeseed, and so on. Let’s see what we can do to the north. We must move in this direction.”
The Head of State drew attention to the fact that some areas of the Gomel Region traditionally receive low grain yields, and therefore other options can be considered. 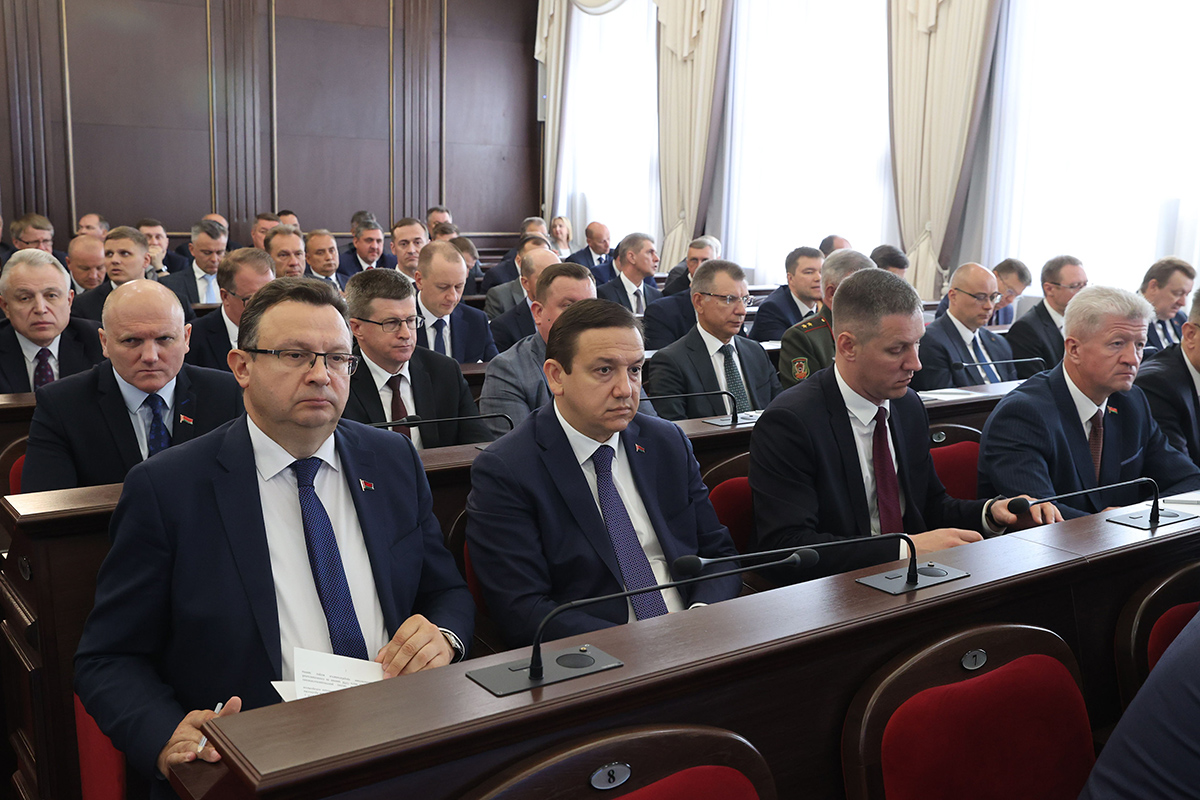 The President also instructed to study the need for imported seeds for the 2023 harvest, anticipating the risks of shortages by the start of the sowing campaign, “Seeds must, in principle, be their own. We have already talked about this a lot.”
The Head of State instructed to reduce to a minimum the time for consideration of applications for project lending and financing from innovation funds. As was noted at the meeting, sometimes these funds are used not quite for their intended purpose, and this is not good. Special attention is given to the banking sector and settlements.
“It is necessary to introduce the possibility for banks to make settlements in Turkish lira and other alternative currencies,” instructed the Head of State.
The topic of transport, prompt delivery of products to foreign buyers was raised several times at the meeting. In this regard, one more instruction is to provide domestic enterprises with a sufficient number of containers, wagons and railway platforms, giving priority to exporters.

In his report, Prime Minister Roman Golovchenko announced the trends in the development of the Belarusian economy. According to him, under the influence of sanctions and the challenges associated with it, it nevertheless demonstrates historically high qualitative indicators of balance, “This underlines the high adaptability of the economy to external shocks and the adequacy and effectiveness of the measures taken. The balance of foreign trade for January — July was positive, in the amount of $2 billion 300 million. Also a historical high.”
The Prime Minister drew the attention of those present to the fact that, compared to the same period last year, the balance improved by $440 million, “The maximum inflow of currency from foreign trade is fixed, which, accordingly, ensures the stability of the foreign exchange market.”
He also announced data on the inflow of foreign investment on a net basis. And again a historical maximum. They amounted to $1 billion 800 million, “I emphasise: straight lines are the maximum for the entire observation period. This confirms that, despite external pressure, the country’s investment image is preserved, reflecting its reliability, and active work is underway to reinvest funds in the economy by foreign companies.”

Concluding the meeting, the President summarised some instructions in various areas.
Firstly, the Head of State ordered to instruct the Government, regional executive committees, Minsk City Executive Committee, together with the National Bank, to consider the proposals of groups that had previously worked in the regions to study trends and problematic issues.
Secondly, Aleksandr Lukashenko instructed to ensure that by the end of 2022, each region in terms of gross regional product will reach a level not lower than last year. 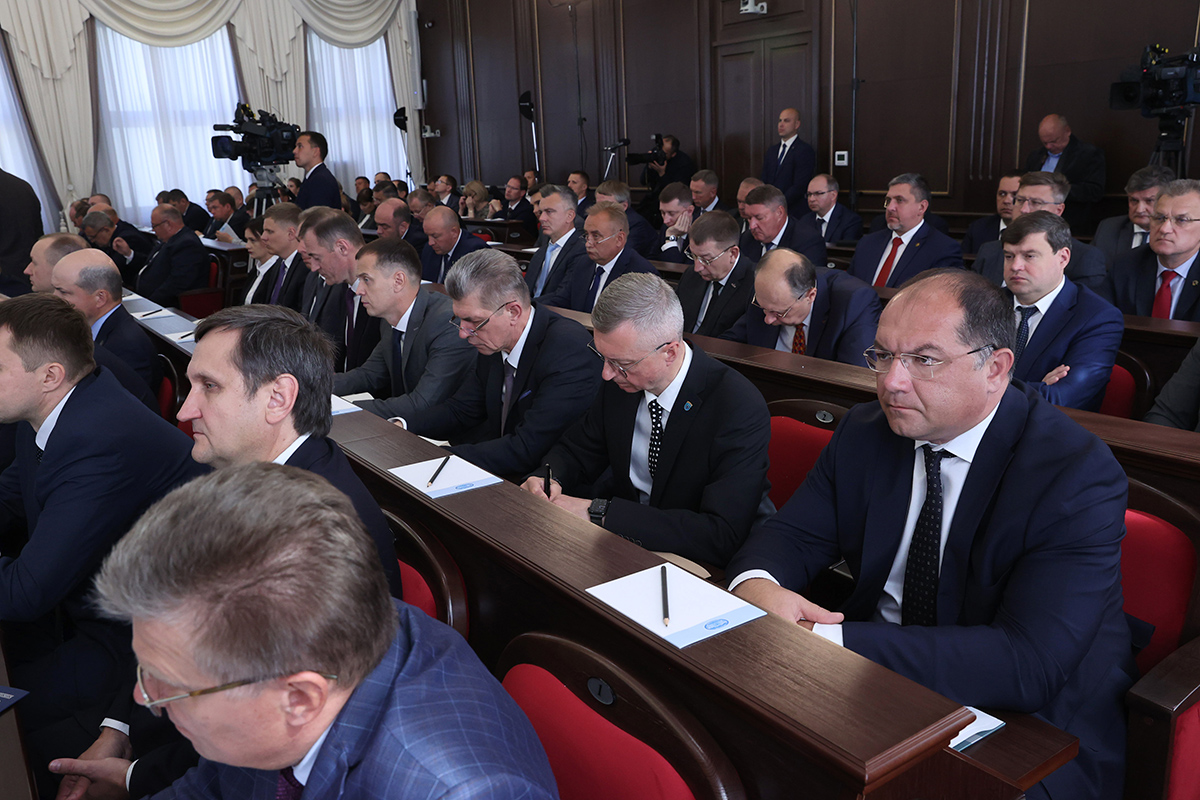 Thirdly, it is necessary to make up for the lost profit from the loss in January — May of the current year of export earnings by reorienting exports. However, cooperation should also be intensified with the so-called unfriendly countries.
“It is necessary to conduct a dialogue with all countries. Sanctions will go away sooner or later. And these wild relations that we have with the West will also go into oblivion. We must not lose these markets,” emphasised the President.
Fourthly, there were instructions to ensure 100% disbursement of funds to support small and medium-sized businesses, preferential housing loans, as well as lending to organisations, taking into account Decree
No. 93 ‘On additional measures to ensure the stable functioning of the economy’.
Along with this, the Head of State focused the attention of the head of the Ministry of Antimonopoly Regulation and Trade on pricing issues, rising prices in the consumer market.
As for small and medium-sized businesses, the President warned that they should first of all focus on their own strengths, and not expect any benefits and additional support from the state in the current situation.
Fifthly, Aleksandr Lukashenko instructed to restore the volume of investments in fixed assets, including by doubling the pace of land reclamation.
Sixthly, there were instructions to increase the volume of animal husbandry and crop production with a growth rate of about 105 percent this year compared to last year. It is also impossible to allow the decline in industrial production below the level of last year. Aleksandr Lukashenko, along with this, warned that there should be no production of products only for the sake of indicators, they should not lie in warehouses, but be sold to customers.
“We brainstormed the problems of the economy during the sanctions period. Once again I say what I said on Independence Day: everyone has a zone of responsibility, everyone must solve their own problems. They are everywhere,” emphasised Aleksandr Lukashenko. “We can never allow bringing the country to the abyss. Yes, it’s not our fault. But who will listen to us then? Nobody will listen. Don’t forget, the lessons of 2020 should be law for us.”
The President instructed to prepare a draft resolution based on the discussion.