In November, Belarus celebrates the Day of the Blacksmith or the national holiday of Kuzma — the patron saint of blacksmiths. Despite the fact that modern industry has supplanted handicrafts, the profession of a blacksmith remains highly respected. A halo of mysticism and mystery still hovers around it while forged items today are expensive luxury items, beautiful, graceful works of art. The work of the blacksmith and his image are covered with myths and speculation. People considered the blacksmith to be a hero, in whose hands iron and fire become obedient. A strong, muscular man with a beard — this is how forge masters are usually portrayed. Some associate this stereotype with the appearance of the patron saint of ‘iron spellcasters’ — the Greek God Hermes. In fact, even a seemingly feeble person — either a man or a woman — can work with a hammer on an anvil. 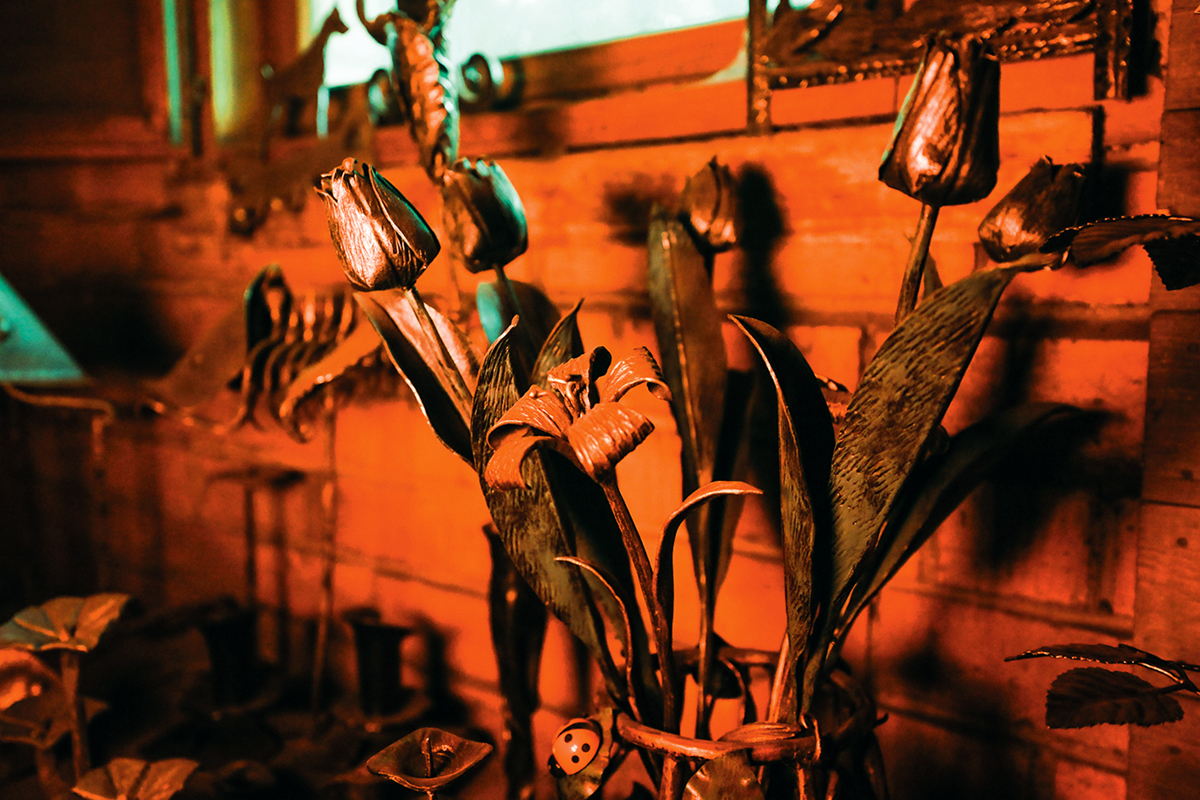 Catch it in 30 seconds 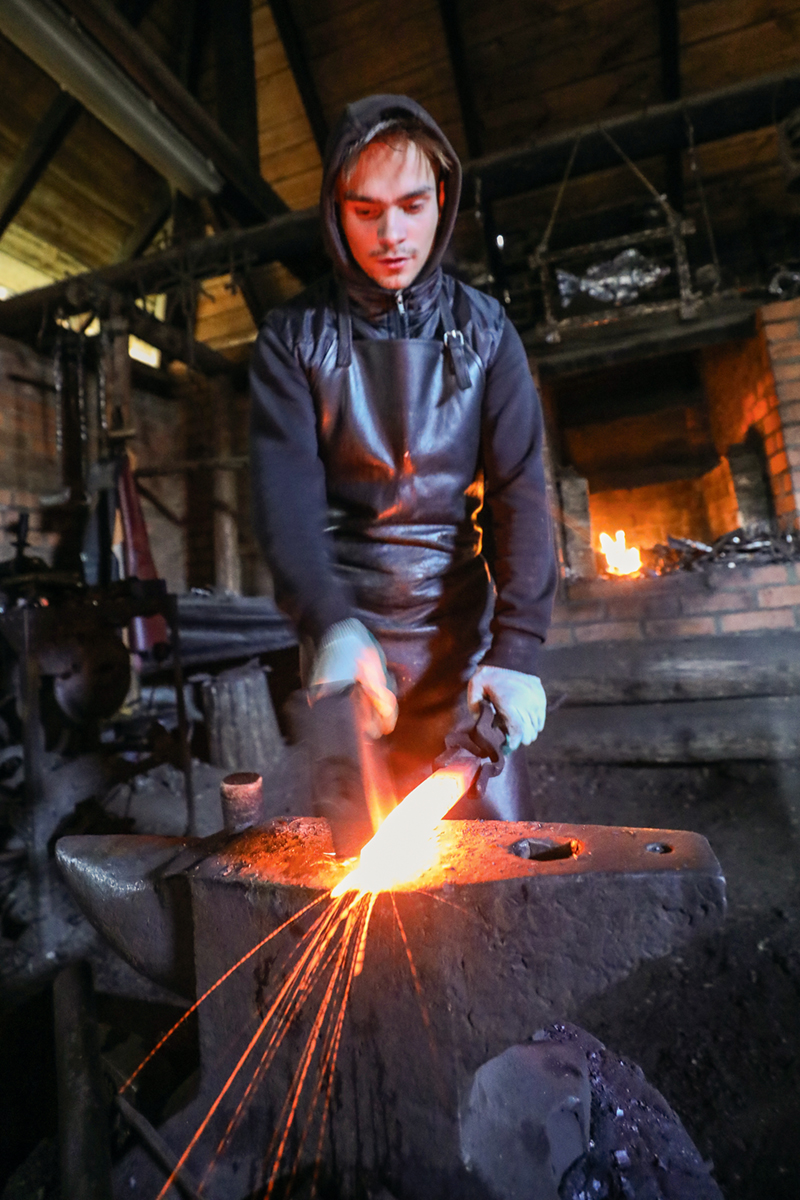 The horn sounds like a hissing spell, the bellows inflate the power of his words, darkness rules in the forge while the hammer claps against the hot metal...
…Despite the numerous artistic images of the forge, where the master is streaming with sweat, the workshop is cool and dark. In the twilight, blacksmiths find it easier to determine the temperature of the metal by the colour of the heat. Two masters of artistic forging of the Dudutki Museum Complex —
Aleksandr Chichko and Aleksandr Levitsky — are forging a fresh poker together. This is one of the most popular items among customers.
The blacksmith has from 30 seconds to three minutes to turn the malleable metal in the fire into a functional squiggle, so there is no waste of time here. Craftsmen mainly use steel since its approximate temperature during forging is a thousand degrees. The piece is laid on a strong anvil, the weight of which can vary from 100 to 250 kilograms, and the sonorous sounds of metamorphosis are alternately extracted from the steel.
There is a huge amount of finished products in the forge. Artistic forging assumes small things: they are mainly used for interior decoration. But, in my opinion, the most amazing thing is a miniature forged ring designed for the thin finger of a beautiful girl. Jewellery requires precision: there is no room for error.

Aleksandr Levitsky has been doing blacksmithing for about five years, and he held a hammer in his hands for the first time when he was six. His grandfather took over his training; from him, Aleksandr inherited the old forge in Dukora. Now he is engaged in its restoration. Alongside forging, Aleksandr continues blacksmithing traditions: for example, at weddings. 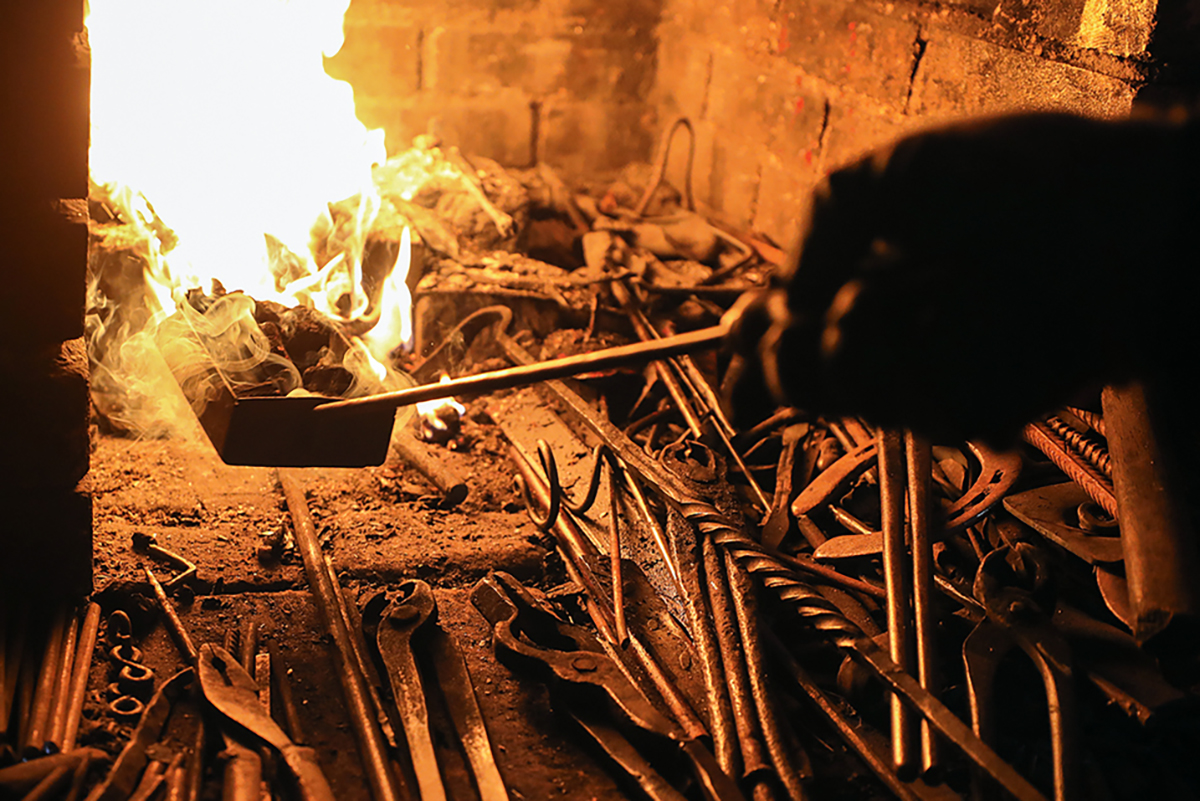 “In the Middle Ages, when there was no priest in the villages, young people came to the blacksmith. Together with them, he forged two nails, twisted them together and hammered them into the tree. It was a symbol of the unity of two lives,” Aleksandr Levitsky plunges us into entertaining stories of distant times. “Now at weddings, a horseshoe and two hearts are most often forged, which are then tied. Such ceremonies are quite rare: in the five years of my work, I was invited only three times.”
Aleksandr can truly surprise with his hand-forged metal: without a hammer, with his fist or palm. To do this, the guy heats up the workpiece, puts his hand in cold water and beats the red-hot metal with force. The spectacle is fascinating and frightening at the same time: the temperature of the product at this moment can reach a thousand degrees! 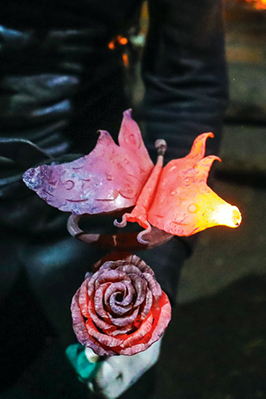 Blacksmithing also goes smoothly with the help of humour, which I can assert to. For example, the answer to the question ‘What discount can you offer on a product?’ may be ‘There is an option of one hundred percent: you do not order anything, we do nothing’.
Aleksandr Levitsky debunks several well-established myths. For example, you often come across in literature: ‘one respected blacksmith forged swords for an entire army’. In fact, it will take about a month to make one unit of such a weapon. And numerous apprentices often worked at the forge. Whole blacksmith workshops existed many years ago.
“The master must know some aspects of physics, but mostly chemistry. In artistic forging, this is not necessary, but in an armoury it will definitely come in handy,” says Aleksandr Levitsky.
He easily cuts the air with a sword, not just for fun. There is a hardening method in which the item must be actively rotated. Most often, this is done for knives: they are tied to a wire and are rotated in the air at high speed.
“This makes the item more durable. Air enters the pliable heated metal, forming some porosity that is invisible to us,” explains the master. “The best hardening of this type is Japanese. Therefore, in future I really want to visit this country and bring back another interesting technique.”