The work of enterprises under sanctions, the situation in the country’s financial market and curbing inflation. Chairman of the Board of the National Bank Pavel Kallaur and Aide to the President for the Development of the Financial and Credit System Valery Belsky were the first to report to the President, followed by Prime Minister Roman Golovchenko and the heads of Belaruskali and the Belarusian Potash Company.  Aleksandr Lukashenko once again warned the Government and the National Bank that economy is the main thing, therefore, all target figures must be met unconditionally, “Stability must be provided, people shouldn’t worry. It’s sacred.”

Despite all negative forecasts, last year, Belarus not only survived but exceeded the target figures for 2021. As a result, we have an unprecedented over ten years growth rate in industry, record exports in agriculture, the largest since 2012 surplus in foreign trade, a stable exchange rate and growth in gold and foreign exchange reserves. All this made it possible to maintain a positive trend in real incomes of the population. During the visit, Aleksandr Lukashenko drew the attention of Pavel Kallaur and Valery Belsky to positive trends, “Our talk is totally unconnected with any problems. Rather the opposite. You did a great job last year, everyone, the entire banking system. But we must also give credit to the economy. The economy worked.”
As an example, the President cited the fact that the positive balance of foreign trade at the end of last year amounted to 4 billion dollars. On the whole, a strong base for a breakthrough has been created. And no external shocks should be an obstacle to this.

The President emphasised that the main task was to fulfil the plans in the field of economic development of the country. At the same time, he assured that there would be no excessive pressure on the leaders of the Government and the National Bank. Moreover, Aleksandr Lukashenko actually gives them carte blanche, reminding them that they have all necessary controls.
However, the Government and the National Bank should be one team, that is, act in a unified manner. It is one of the President’s requirements, “These conversations… well, the Government has its own indicators, and the banking sector has its own ones...

We’ve agreed on all issues. We have figures within six percent for inflation, and for GDP, and the economy. Everything’s been determined. It must be strictly observed.” 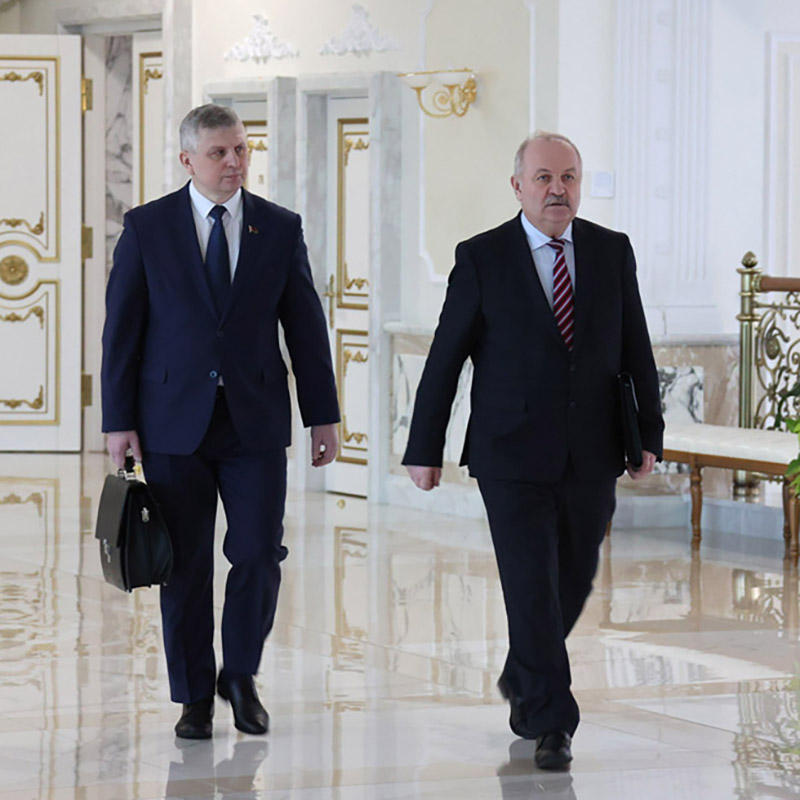 Chairman of the Board of the National Bank
Pavel Kallaur and Aide to the President
for the Development of the Financial and
Credit System Valery Belsky
Even the sanctions policy of the West will not be taken into account. Although, of course, it will not be ignored. The President addressed it while listening to reports made by Prime Minister Roman Golovchenko, as well as the heads of Belaruskali and the Belarusian Potash Company. Earlier, Aleksandr Lukashenko stated that the issues of opposition to the sanctions policy were within the competence of the Government.
The President said that many enterprises found good alternatives in terms of foreign partners and markets last year.
Furthermore, Aleksandr Lukashenko touched upon the actions of the Lithuanian authorities. In mid-January, in order to please its masters from across the ocean, the government of this country resolved to terminate the agreement with the Belarusian fertilizer company Belaruskali. It is among the ones on the US sanctions list. Although experts warn that a ban on the transit of fertilizers through Lithuania will harm not only the port of Klaipeda but also many subcontractors, Vilnius preferred loyalty to Western partners to the well-being of its own citizens.
Be that as it may, Belarus has to react to the unfriendly actions of its neighbours. And Aleksandr Lukashenko gave Roman Golovchenko specific instructions,

“If, for example, Lithuania doesn’t want to let our cargos pass to the port and transship them in the port, well, that’s their right. If it happens, it means that literally within a few days the measures that we agreed on in relation to Lithuania must be implemented.”

At the same time, the President made it clear once again that we weren’t the initiators of this confrontation.
“Once again, I’d like to stress: we don’t initiate any processes that would lead us into a clinch with Lithuania, Latvia, Poland or Ukraine. We don’t need it. If it’s necessary for them to save face, let them come out and negotiate.

We are ready to negotiate. However, if they continue to put pressure on us, we’ll use the plan that we have. Let them not take offence afterwards. And the people of Lithuania, Poland and other countries should understand that we are just responding to these challenges.”


Later, Chairman of the Board of the National Bank Pavel Kallaur told reporters about the prospects for the financial sector in 2022,
“We will aim for inflation to be around six percent by the end of the year. Let me tell you right now that this is no simple matter. In the first place, the problems are caused by the so-called imported inflation. Many countries in the world, including our neighbours, are also experiencing this unpleasant period. In some countries, the corresponding records reach figures of thirty years ago. We expect a significant slowdown of inflation. There is every reason to believe that by joint efforts we will be able to provide the level planned.
In case the inflation trend we predict materialises, the average refinancing rate will be maintained within 9 to 10 percent.”


What goals the Government and the National Bank plan to achieve in 2022
According to forecasts, next year, the growth rate will be 102.9 percent for the GDP, 102 percent for real disposable money incomes of the population and 103.3 percent for fixed capital investments. Exports of goods and services are expected to grow by 6.3 percent as compared to 2021. The monetary policy will aim to maintain inflation around 6 percent. Taking into account the upcoming payments, by the end of 2022, gold and foreign exchange reserves will amount to at least $7 billion.