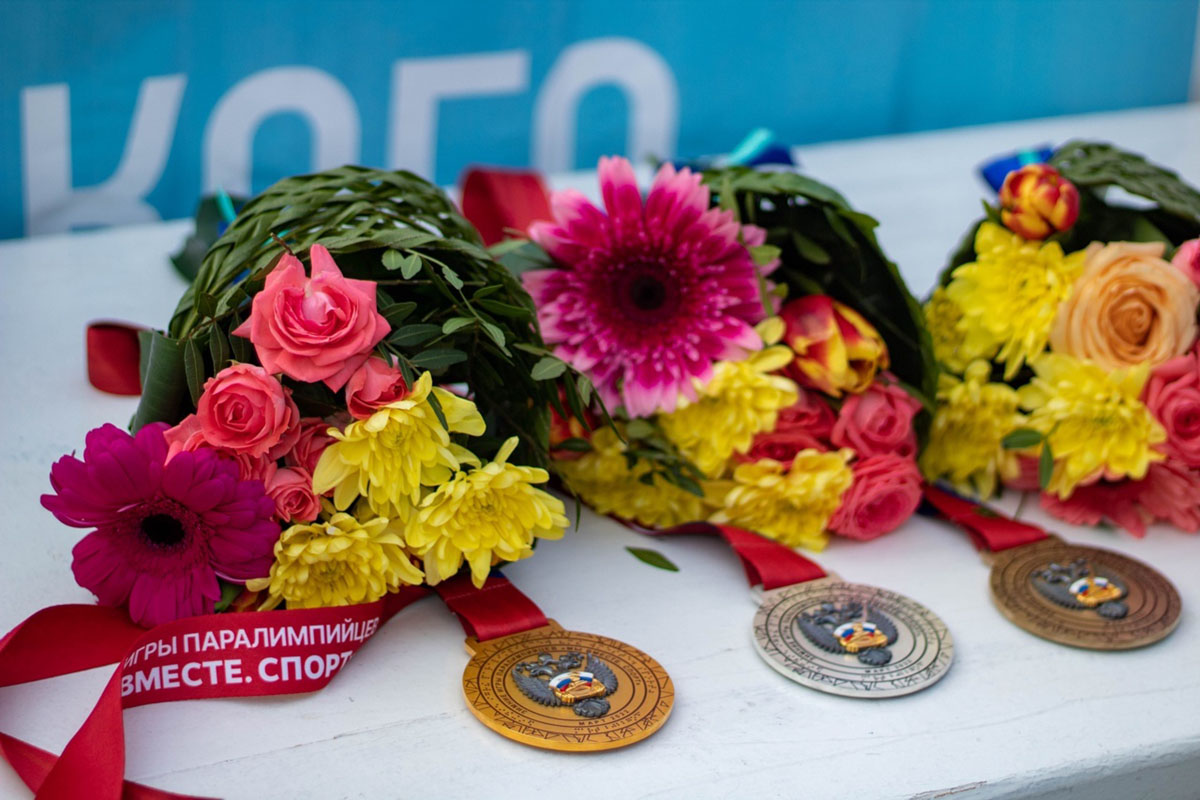 Belarusian Paralympic athletes showed excellent results at the ‘We are Together. Sports’ games

The road home is always pleasant. It is doubly pleasant when medals tinkle with soft music in the suitcase, and the soul is warm from a sense of accomplishment. It was with such a mood that the Belarusian Paralympic team flew from Khanty-Mansiysk after winning 16 awards (5 gold, 2 silver, 9 bronze) at the ‘We are Together. Sports’ games.

The blasphemous decision of the International Sports Syndicate, which, having lost the shred of conscience and elementary human decency, did not allow representatives of Belarus and Russia to participate the day before the official opening of the 2022 Paralympics, caused anger and indignation among all mentally healthy and adequate people. A sneak attack was inflicted on disabled athletes, who not only have nothing to do with politics a priori, but have already suffered a lot from life.

Nonetheless, representatives of parasports are not used to holding and accumulating anger in themselves — they are well aware of what life is. Therefore, actions are more important than words or any complaints. In a short time, their own, alternative ‘We are Together. Sports’ games were organised in Khanty-Mansiysk. 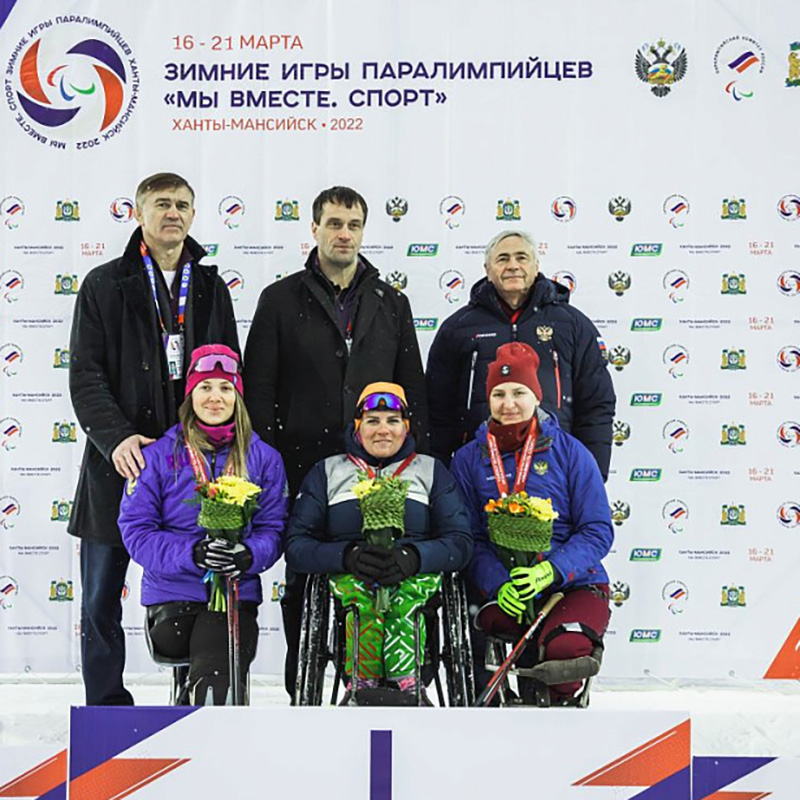 Valiantsina Shyts (centre)
Photo: www.paralymp.ru
Here everyone was able to come off, show their best qualities and win medals, the price of which is no lower than the one that they tried to steal from our Paralympic athletes in the most arrogant and cynical way.
The real hero of the past starts was Valiantsina Shyts, who won all three ski races among seated athletes — she is a three-time champion of the games!
Valiantsina was born in a large family in the Boroviki village, Svetlogorsk District. The birth trauma did not allow the girl to learn what it means to take a step with her own legs, but her character allowed her to confidently stand on her feet in a figurative sense of the word. At a certain moment, the parents made a difficult decision for themselves to send the girl to a specialised boarding school, but it was this twist of fate that became the key for Valiantsina. It was there that her talent, her speed, strength and will were acknowledged. Her path to this success wasn’t easy. She participated in the 2014 Paralympics in Sochi, performed on the slopes of Pyeongchang 2018, but it was 2022 that was supposed to be her hour of triumph. It was just like it’s supposed to be. 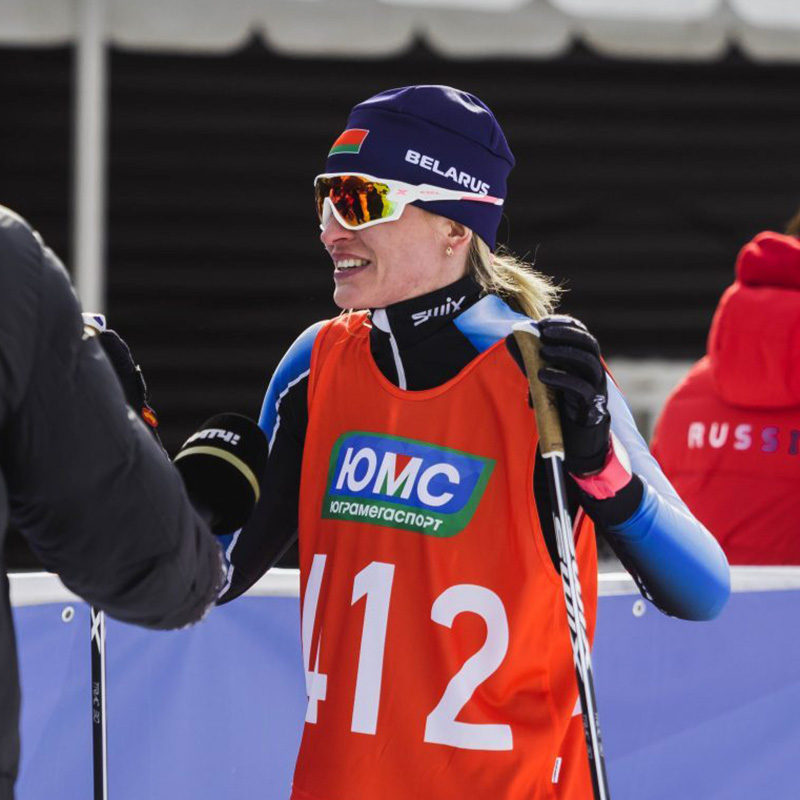 Despite all the obstacles and heartless decisions of the sport politicians. Valiantsina Shyts commented her performance at the ‘We are Together. Sports’ games, “Here we managed to cheer up a little after the situation with the Paralympic Games in Beijing. The support of the stands is just super, it’s very nice when they shout to you: ‘Come on! You can do it!’. It gives strength and energy, as if I got a second wind. I am satisfied with my performance at all the races, but there is always something to work on.
I did not expect that I could perform so well here, I expected to hit at least a top three or two. Therefore, this result, three wins, is a big surprise for me. Maybe I just underestimated myself. You know, I had difficult moments in my career when I wanted to quit everything. Today I just want to thank my family and my coach for his patience because there was a lot to go over for him.”
The philosophy of Valiantsina Shyts is not to lose heart. There is no doubt that all other Paralympic athletes go through life with the same motto. 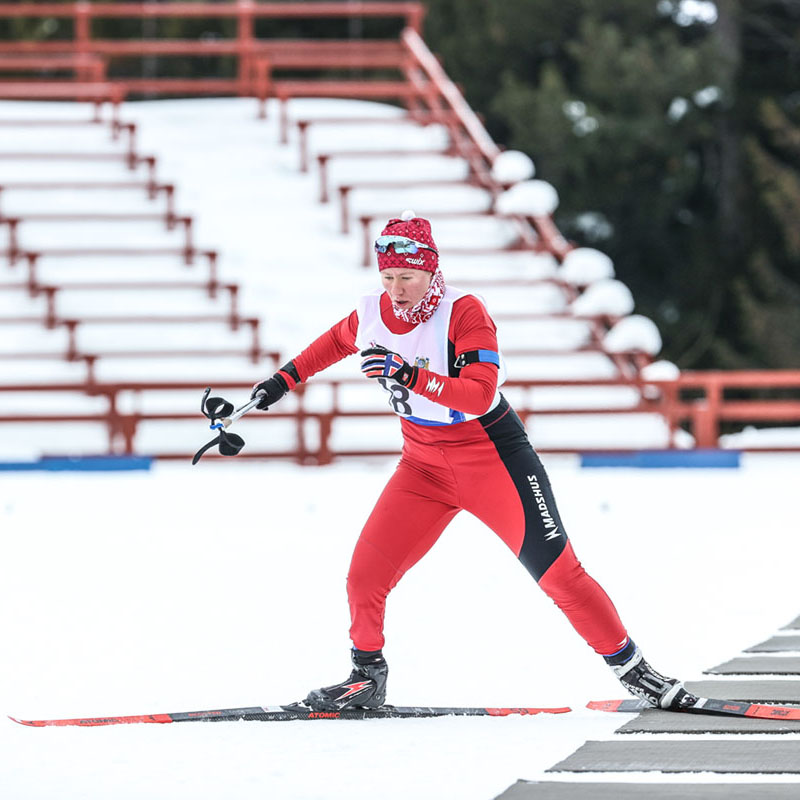 Darya Fedzkovich
Photo by REUTERS
In Khanty-Mansiysk, Sviatlana Sakhanenka twice climbed the top of the podium. Four years ago, she had three victories in South Korea, so Sviatlana today is one of the most titled Belarusian Paralympic athletes. Serious vision problems followed all her life, forcing her to literally look for her life path by touch. As you know, a journey of a thousand miles begins with a single step. In an interview with SB, Sviatlana said, “My vision is about minus 14. Even with glasses or contact lenses it is not corrected, I wear them to have an idea of what is in front of me: a closet or a door. However, I basically do not want to take a guide with me or walk with a stick. It is not difficult to live with such vision. It is difficult to believe that if you are physically challenged, then everyone around owes you something. After all, many people just sit and whine about how unhappy they are. They cannot make a cup of tea for themselves, they constantly complain about the state authority. I’m used to the fact that there is no one to feel sorry for me. If you want to do something, go ahead and do it!”
Belarusian Paralympic athletes Lidziya and Dzmitry Loban, Yury Holub, Raman Svirydzenka and Darya Fedzkovich also became winners in Khanty-Mansiysk. Good job, you are true heroes!


Belarusian President Aleksandr Lukashenko has sent greetings to the Belarusian Paralympians on great performance,
“In Khanty-Mansiysk you won a bunch of medals, demonstrating high sportsmanship, iron will and unbending character. Once again you proved that there is no limit to what a person can do. All our people support you in your fight for the right to do what you love and to defend the honour of Belarus in international sport arenas without the interference of politics. We are proud of your endurance and patriotism,” the message of greetings runs.
Aleksandr Lukashenko wished the Belarusian Paralympians and coaches strong health, wellbeing and new great victories.

sport medals We are Together Belarusian Paralympic team